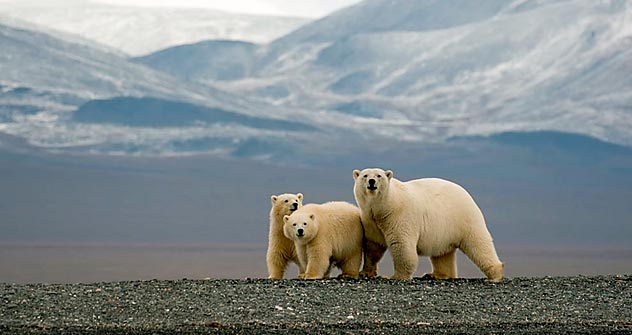 Wrangel Island in the Republic of Chukotka, the home of the polar bear. Source: Bezrukov & Bashnaeva

Wrangel Island is a breeding ground for polar bears and one of the best-preserved examples of the Arctic ecosystem.

Wrangel Island in the Republic of Chukotka, famous as the home of the polar bear, was only discovered only 162 years ago. To protect the fragile ecosystems on this island from the destructive effects of human activity, a law was passed in 1976 declaring Wrangel Island and the neighboring Gerald Island special protected zones. Aside from the few people who work at the nature preserve and the staff at the arctic meteorological station who study the island’s ecosystems, there are no humans on the island, and it is recognized as a UNESCO world heritage site for its unspoiled natural environment.

The gallery: The home of the polar bear

This amazing, snow-covered island, once part of the ancient Bering continent, is a haven for arctic wildlife. And here, under a layer of snow many feet thick, protected from the fierce December blizzards and frosts, tiny, blind and defenseless polar bear cubs are bought into the world. Every year, about 500 polar bears build dens and give birth in these protected areas. Some parts of the island have the highest concentration of polar bear dens in the world – up to five per square kilometer.

In March, the only indication of the coming of spring on these hostile lands are a few polar bear prints in the snow. Around this time of year, the female bears dig a small tunnel out of their dens and let their cubs get a glimpse of the big world outside. For the first few days, the cubs and the mother return to the den every evening before darkness falls and the cold sets in. The den is also their shelter from the island’s frequent blizzards. During this time, staff at the nature preserve carry out a survey of the dens in the area where cubs have been born. This work is not cheap and these surveys are no longer carried out on the island every year; the helicopter flight alone costs around a million rubles ($33,000).

It is quite an incredible experience to watch the mother polar bear emerge from the den with two fluffy cubs in tow. After a long hesitation, the mother stretches herself and rolls. The baby bears follow suit, and soon they are also turning somersaults in the snow, joyfully discovering their bodies and the world in which they live.

The female bear lies down, closes her eyes and soaks up the sunlight. The cubs gather to her to suckle, and without leaving their mother, they start to play a game, licking their mother’s nose every now and then. Reluctantly the mother joins in, answering with a lazy wave of her paw, or a nod of her head. She has already dedicated three months of her life to bringing up these cubs; licking the their tiny bodies clean, carefully turning from side to side so as not to crush them, and preparing her offspring for the nomadic life that awaits them. After three months, they have grown from 400 grams to more than 5 kilograms. They have grown a thick coat of white fur and look out at the world from their big black eyes, watching their mother’s every move.

The bears enter their egg-like den in the snow through a corridor so narrow that they have to slide along on their bellies. The den could easily fit four or five adult humans. The floor, covered in ice, is polished and shiny. The walls and ceiling are covered in scratch marks and white fur that has frozen into the snow.

Polar bears spend the whole summer cut off from human view by the inaccessible icy expanses of the frozen Arctic Ocean.  Drifting on the ice floes, the bears hunt seals and walruses. Towards the end of spring, around the beginning of the summer is a time of courtship for the bears. At this time of year the male bears, who are all desperately seeking a mate, can pose a serious threat to the life of the cubs.

In September, huge numbers of Pacific walruses gather on the beaches of Wrangel Island to rest and gather strength for their big annual migration. As autumn approaches, the islands are once again covered in ice, and the polar bears return. When they hunt for food they cause widespread panic at the walrus colonies; many of the sea mammals being crushed to death as they try to escape.

As the harsh winter sets in, the bears spend a lot of time building up fat reserves for hard times ahead. With a belly full of food, the bears seem happy and relaxed, and they spend their days sleeping on the beach and swimming in the sea; and both cubs and adults alike are constantly engaged in playful scuffles. The polar bears are surprisingly cheerful and friendly when among their own kind.

“On one of the spits on the island we are observing a comparatively small colony of Pacific walruses, and a dozen or so polar bears,” said says Alexei Bezrukov, who works at the Wrangel Island Nature Preserve. “Before we go to sleep, we make sure we have heavy bludgeons by our pillows, and we set up flares and firecrackers. This is because at night the bears often come over to the rusty old van where we sleep, and start sniffing around, trying to understand what all these new smells are. This wakes us up, and we then bang the wall with sticks, hoping to scare the animal off so he doesn’t try to investigate what’s inside our fragile makeshift home.”

Polar bears are very curious creatures; they take an interest in anything new or unusual, but they are not at all aggressive. It is as though life in this icy wilderness has taught these creatures to respect each other, and means that if they feel that they are in danger, they prefer to walk away from potential problems, using flight as a means of survival - in the extreme conditions of the Arctic, even a small injury could be fatal.

Lead by curiosity, polar bears like to check out human habitation. It is not hard to drive a bear away. Sometimes it is enough to bang a saucepan, or make another loud noise. Some people scare them away with a big stick. Surprisingly enough, if you run at a polar bear brandishing a stick up and down in front of you, the predator will probably run away. This is exactly how people on Wrangel Island drive off bears every year.

Winter is coming, the sea is quickly covered in ice and nearly all the polar bears are out wandering the kingdom of the frozen Arctic Ocean. It is only the pregnant females who stay on dry land, waiting for the mountain slopes to be covered in a thick blanket of snow. When it comes, under the flicker of the Northern lights, with the North Star shining above them, another generation of polar bears will be brought into the world.