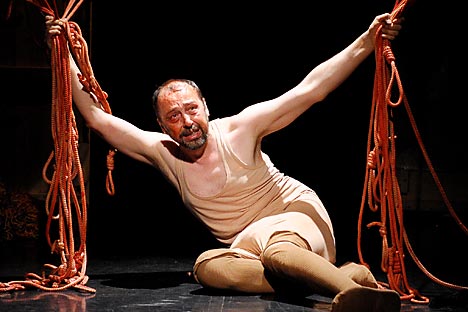 Nikolai Kolyada, one of the nation's most respected playwrights, directors and theatrical visionaries, joined Prime Minister Vladimir Putin's presidential campaign in Yekaterinburg which brought forth a flurry of accusations and even a bit of petty vandalism.

In early January, Nikolai Kolyada, one of the nation’s most respected playwrights and directors, joined Prime Minister Vladimir Putin’s presidential campaign in Yekaterinburg. The move brought forth a flurry of accusations, counter-accusations and even a bit of petty vandalism that horrified Russia’s theater community.

“I joined Putin’s election campaign because I believe we cannot find a better leader. I will vote for him; that is my right. All others on offer seem absolutely unworthy to assume such a position,” Kolyada said, according to RIA-Novosti.

Reactions came swiftly. So virulent were the attacks on Kolyada on his LiveJournal page that he temporarily closed it down, and on the morning of Jan. 13, Kolyada found that his theater had been plastered with photographs of Putin with lipstick traces all over his forehead. Expressing fears for his own safety and that of his company, Kolyada called on the police to find the culprits and ward off further attacks.

Four days later, the vandals came forward themselves. Vyacheslav Bashkov, a member of Movement Against Violence explained why his organization carried out the midnight raid.

“Unlike other members of Putin’s support group, Kolyada, until the very last moment, had been an authority figure for this city, the region and the country,” Bashkov said. “No one expected him to do something like this. Society is extremely disappointed.”

More fallout came when Pavel Rudnev, a longtime colleague and collaborator of Kolyada’s on many projects — including the playwright’s prestigious Eurasia play competition — openly broke ranks with him after Kolyada posted a television news clip on his LiveJournal page showing Russian opposition politicians visiting the American Embassy in Moscow for a meeting with Ambassador Michael McFaul. The event was seized on by many in the blogosphere as proof, or, at least, a suggestion, that the Russian opposition is taking orders from the U.S. government.

“Nikolai Kolyada posted the already well-known news report of opposition leaders arriving at the American Embassy,” Rudnev wrote on LiveJournal. “‘I commented, ‘I also go the American embassy. Is that horror and shamelessness, too?’”

It is worth noting that the copious comments on Rudnev’s post almost invariably express regret, rather than anger, over what has transpired.

Many have expressed support for the playwright. The company of the New Art Theater in Chelyabinsk publicly declared that they stand firmly behind Kolyada.

Appearing on a television talk show, a visibly exasperated Kolyada explained why he chose to support Putin’s candidacy.

“I don’t want to wake up March 5 in another country,” he said.

But a series of quotes posted Jan. 12 on a blog on the Web site Grani.ru clearly imply that Kolyada’s support for Putin may have come about because he received a government grant last year to move his theater into a new home.

Kolyada is quoted as saying, “Under the circumstances I don’t think we need renewal. Putin behaves like a boss.” Kolyada continued, “You know, we won that tender entirely honestly. But I thought, ‘Kolyada, the government is giving you a building for your theater, they do something else for you, and you’re going to be in the opposition?’”