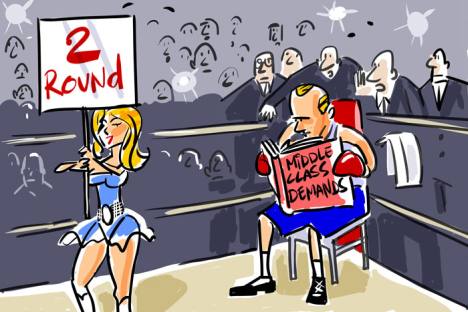 The presidential election, the appointment of a new prime minister, the plight of the opposition and the economic situation are the most pressing issues for Russia in 2012. Drawing by Alexey Iorsh

Will Prime Minister Vladimir Putin allow a second round in the March presidential election? Will he improve Russia's economic record? Who will be the next prime minister? Will the opposition find a good leader? These questions remain unanswered.

There are four burning questions to be answered in 2012. The first and most important is: Will Prime Minister Vladimir Putin allow a second round in the March presidential election?

At this point, it is clear that if Putin tries to force his way back into office and win in the first round, he will clearly alienate the electorate further. To force the vote suggests that Putin believes he is running an autocracy, but as Charlie Roberson, chief strategist at Renaissance Capital, has argued: “Russia today is not an autocracy, but a weak democracy with authoritarian tendencies.”

Russia is drifting slowly towards a more representative government. If the trend continues, then Putin will fail to get 50 percent in the first round, but win handsomely in the second.

Putin’s return to the presidency is the first and least-difficult challenge he has to face. In his “managed democracy” — which is now more or less equally divided between the “managed” and “democracy” parts — the question of who is prime minister will be just as important for Russia’s development.

Economists are saying with one voice that Russia needs a new economic model if it is going to continue to grow. Putin said twice at the very end of 2011 that “4 percent growth is not good enough. We need 6 percent or 7 percent.” The consensus forecast for this year is 3.8 percent, so clearly Putin needs to do something radical to get the economy back on track. And so the second burning question is whether former finance minister Alexei Kudrin can return to politics as prime minister. This option could lead to faster and more radical reform; most of the credit for Russia’s fundamental strength today can be laid at Kudrin’s feet. This option also has the advantage (for Putin) of keeping political power inside the Kremlin’s ring fence around “democracy.” But both reformers and loyalists are skeptical of Kudrin.

The third question is whether the opposition movement (such as it is) can find a leader to maintain itself as a political force outside of the Kremlin’s political ring fence. A real opposition would be cheered in the West, but is clearly antithetical to Putin’s ideas of how Russia should develop through 2024, so he will resist it with all the considerable means at his disposal. If the opposition does coalesce around a real independent leader, the reform process — both economic and political — will be more chaotic, but probably better for Russia in the long run.

Despite Putin’s image in the West as an out-and-out dictator in charge of a kleptocracy, in reality he is a pragmatist who has always been intensely interested in his popularity. Therefore, the final question is whether Putin will come up with the sort of radical reform plan that Russia needs if he is to deliver on his promise for 6 percent to 7 percent growth. Again, despite his image, Putin is a committed reformer. He has said repeatedly his goal is to battle poverty and improve the standard of living for the average Russian — but he needs now to also address the middle class’s demands. Putin likely has a plan for this, but it may not become apparent until after the elections.

Ben is the editor of Business News Europe (BNE) and an Eastern Europe specialist, who has been covering Russia since 1993. He is a former Moscow bureau chief for the Daily Telegraph and a regular contributor to The Wall Street Journal, The Financial Times, Institutional Investor.