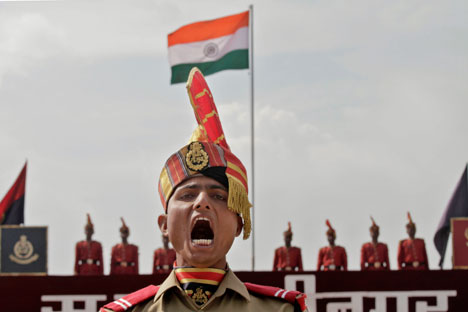 A new recruit of the Indian Border Security Force (BSF) takes part in a passing out parade ceremony in Humhama, on the outskirts of Srinagar, India. Source: AP

India has decided to buy 126 fighter jets from France, taken delivery of a nuclear-powered submarine from Russia and prepared for its first aircraft carrier in recent weeks as it modernizes its military to match China's.

India and China have had tensions since a 1962 border war, and New Delhi has watched with dismay in recent years as Beijing has increased its influence in the Indian Ocean.

China has financed the development of ports in Pakistan, Sri Lanka, Bangladesh and Myanmar, and its recent effort to get access in the Seychelles prodded New Delhi to renew its own outreach to the Indian Ocean island state off western India.

The Chakra-II, on lease for 10 years at a cost of nearly $1 billion, is expected to be inducted into the navy by March. Later this year, India is expected to take delivery of a retrofitted Soviet-built aircraft carrier.

In addition, six Scorpene subs being built in India under license from France in a $5 billion deal are expected to start going into service in 2015, three years behind schedule, said Defense Minister A.K. Antony. Labor problems and difficulties procuring needed technology have hampered the project, he told the Indian parliament recently. Critics also blame India's sluggish bureaucracy for the delays.

With its recent purchases, running into tens of billions of dollars, India is finally working to counter what it sees as aggressive incursions into a region India has long dominated.

"The Indian military is strengthening its forces in preparation to fight a limited conflict along the disputed border and is working to balance Chinese power projection in the Indian Ocean," James Clapper, the U.S. director of national intelligence, told a Senate committee last week.

India has created new infantry mountain divisions and plans to raise a strike corps aimed at countering aggression by China. Their border still has not been set despite 15 rounds of talks, and patrols frequently face off on the ground.

Analysts say that although the probability of a conflict between the two Asian giants is remote, a short, sharp conflict in the disputed Himalayan heights can't be ruled out.

"Over the last couple of years, the Chinese have been acting more and more aggressively in the political, diplomatic and military arena," said retired brigadier Gurmeet Kanwal, director of the Indian army-funded Centre for Land Warfare Studies in New Delhi.

Indian leaders and defense strategists have fretted as China modernized its forces and extended its military advantage over India. For some in India, countering China is taking precedence even over checking longtime rival Pakistan.

"Of late, there has been a realization [in India] that China is the real danger of the future," Kanwal said.

But Zhao Gancheng, a South Asian expert from the Shanghai Institute of Foreign Studies, said India's reasons for building up its military go well beyond China.

"Of course, India takes a cautious attitude against China due to some unsettled historical issues. But I still believe India's fundamental goal of developing its military ability is to become a globally big country," Zhao said. "Next, it wants to make certain preparations for so-called potential threats coming from China and other countries."

From China's perspective, India's military buildup is "not a main factor" in its defense plans, Zhao said. "Not many people in China regard India as a threat, and China has no intention to take part in a military contest with India," he said.

The drive to modernize Indian forces was long overdue, as much of its equipment was obsolete Soviet-era weapons, and the orders for fighter jets, naval frigates, helicopters and armaments have made India the world's largest importer of arms. The Stockholm International Peace Research Institute said India accounted for 9 percent of all the world's weapons imports in 2010, the latest year for which figures were available.

Last week's order of 126 combat aircraft, won by France's Dassault, followed a bitter battle by global jet manufacturers. The initial cost for the fighter jets is estimated at $11 billion, but on-board weaponry, technology transfers, maintenance, warranties and other costs are expected to almost double the price.

India may be worrying over China's overtures to its neighbors, but New Delhi is reaching out to the Southeast Asian and East Asian countries in Beijing's backyard as well.

India has struck a strategic partnership with Vietnam, including helping Hanoi beef up its defense capabilities. Indian Prime Minister Manmohan Singh has been actively pursuing a "Look East" policy, engaging the leaders of South Korea, Japan, Indonesia, Malaysia and Thailand, among others. The policy has resulted in a troupe of high-level visits to India, bolstering trade and economic cooperation.

Nowhere is the contest between China and India more evident than in Myanmar, where both of the energy-seeking Asian giants are caught in a race to gain access to the country's natural gas sources.

India has regularly conducted defense exercises with countries in the region. It is scheduled to host the navies of 14 Asian countries in maritime exercises later this week; the Chinese and Pakistani navies have not been invited.

And, while India is increasing its defense capabilities, China is doing the same, but faster, making it difficult for India to catch up. The Chinese government's military budget is the second largest in the world after the United States.

India has raised two mountain divisions of soldiers to add to its existing high-altitude troops. Around 36,000 soldiers and officers of the divisions have been posted in the remote northeast, not far from India's Arunachal Pradesh state, which China claims as part of its territory.

A proposal for a mountain strike corps is awaiting clearance by India's cabinet, and an independent armored brigade for the mountain region also is in the works. India hopes to show that it can strike deep beyond its neighbor's borders to serve as a deterrent for any Chinese aggression, Kanwal said.

"India is building up its capability for offensive operations in the mountains with a view to taking the fight into Chinese territory," Kanwal said.