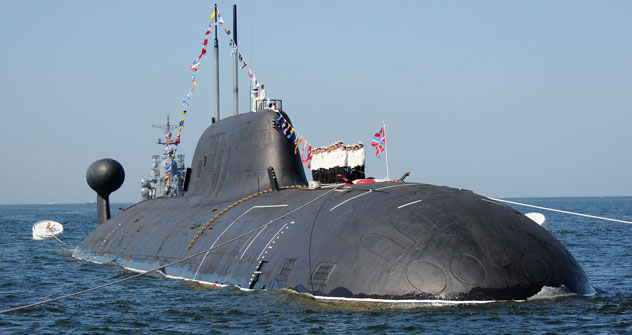 Last month, Russia handed over K-152 Nerpa nuclear-powered attack submarine to the Indian Navy on a lease of 10 years, making India the sixth operator of nuclear submarines in the world. The article traces the evolution of Project 971 Shchuka-B (NATO reporting name Akula-II) that underlines Russia’s formidable prowess in building submarines.

In July 1976, Russia took a strategic decision to develop a new class of third-generation attack submarines. The submarine was designed by SKB-143 Malakhit. The technical specifications were the same as for the Project 945 Barracuda submarine but it was proposed to build the hull using low magnetic steel instead of titanium. The new nuclear submarine had its noise emissions reduced to about a fifth of that of the Barracuda. The design engineers were successful: the new nuclear vessel managed, for the first time in the history of the Russian submarine fleet, to excel its American peer, the third generation Los Angeles class submarine, in terms of the stealth.

The Project 971 submarine was armed with powerful attack weapons that exceeded the potential of same-class domestic and foreign submarines in the number and caliber of the torpedo tubes, the missile and torpedo load. The Shchuka-B engineering design was adopted on 13 September 1977 but was revised with a view to upgrading the sonar system to the level of American subs, which had taken the lead by that time.

Commenting on the Project 971 submarines during hearings in the Committee on Homeland Security, American navy analyst Norman Polmar said: “The Akula’s appearance has showed that Soviet shipbuilders have closed the noise level gap sooner than we expected.”

According to US Navy representatives, at operating speeds of 5–7 knots, the noise level of the improved Akula class submarines, measured by sonar intelligence means, was lower than that of the most advanced US Navy’s Improved Los Angeles class submarines.

The appearance of new super-stealth nuclear submarines in the Russian fleet after the Cold War generated major concerns in the US. In 1991, the issue was raised in Congress. Several proposals were submitted to the US legislators aimed at reversing the situation in favour of the US. Some of the proposals were to demand that Russia make public its long-term submarine development programmes; introduce agreed limitations on the numerical strength of attack submarines in Russia and the US; assist Russia in converting its shipyards building nuclear submarines to facilitate the production of non-military goods.

The campaign to curb Russian submarine building was supported by Greenpeace, an international independent environmental organisation, which called for a ban on submarines with nuclear power plants. The Project 971 nuclear attack submarines are now organic to the Northern Fleet (Yagelnaya Bay) and the Pacific Fleet (Rybachiy). They are used quite actively (by modern standards) in the line of duty.

The K-152 was conceived and planned at the Amur Shipbuilding Plant in late 1991 under serial number 518. It was originally planned to complete the construction and full testing within four or five years but construction was later suspended owing to cash crunch. The decision to complete the project at the Amur Shipbuilding Plant was made in October 1999.  Standing right on the building berth of the shipyard, Vladimir Putin said: “We will finish building this boat on the site.”

The Nerpa differs considerably from the first Project 971 submarines. The vessel underwent a modernisation of all the main systems, including the navigation, sonar and hydraulics. During construction, the submarine was armed with new types of weapon and equipment that are installed in new generation submarines.

Its armaments include four 533mm and four 650mm torpedo tubes capable of launching Granat cruise missiles with an engagement range of 3,000 kilometres, and Shkval, Vodopad and Veter underwater missiles and rocket-shot torpedoes. The submarine is also able to deploy mines.

On January 23, the K-152 Nerpa nuclear submarine (Project 971U Shchuka-B class) was officially handed over to the Indian Navy under a lease agreement at the Zvezda shipyard in the town of Bolshoi Kamen. The submarine was commissioned as INS Chakra II and will be operated exclusively by the Indian crew, without participation by Russian specialists, for 10 years. The contract is worth more than $900 million.

Experts believe that the Nerpa is indispensable to the Indian Navy: this Russian-built boat will be used to train the future crew of the Arihant class submarine developed by the Indian Navy. Military analysts of many countries were initially shocked to learn that India would have its own nuclear submarine. Before leasing the Nerpa, the Indian Navy only had diesel submarines made in Russia, Germany and France.

Specialists argue that the Indian submarine is based upon the Soviet 670 Skat design. When developing the Arihant, Indian engineers also used the structural elements of the Project 636 Varshavyanka, a modern diesel-electric submarine. Indian engineers know the two projects very well. Russian experts were naturally involved in the development and construction of the Arihant, which explains why the nuclear submarine has similar characteristics to state-of-the-art Russian submarines.

Russian and foreign specialists agree that the Indian Arihant is a weapon capable of changing the situation in the region. The submarine carries up to 12 Sagarika ballistic missiles made in India. Given their operational range of 700 kilometres, it is clear why India’s neighbours, especially the not-so-friendly Pakistan, are so nervous.