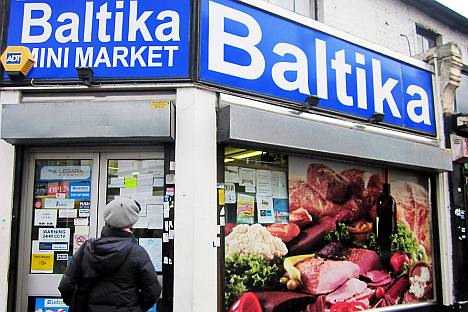 Whatever you want from Russia, whether it’s cabbage pies or antique jewelry, the chances are you can find it somewhere in London these days.

The market for Russian goods is volatile and businesses have had to adapt to a changing, fashion-conscious, peripatetic population. Many shops have been driven online or forced to close, but some are still thriving and have become focal points for the fragmented Russian community.

Kalinka in Queensway is one of these. The owner, Boris Gofman, is proud of the fact that his is the oldest surviving Russian shop in London and has been visited by famous people like cellist, Mstislav Rostropovich and singer, Galina Vishnevskaya. The walls of his little café, Samovar, next door, are covered with photos of Gofman and his famous guests. “Everyone likes the food they ate first as small children”, he says to explain the popularity of the shop among Eastern Europeans, but on the subject of his customers’ nationalities Gofman refuses to be pigeon-holed: “We don’t ask our customers ‘who are you? Where are you from?’ For us, everyone is the same. To everyone who wants them, we sell herring and sausage.” Gofman makes sure that the Samovar’s menu is purely Russian food. “If people want pizza or curry, there are lots of other places where they can go”, he says.

Bryony and Jocelyn Spottiswoode are in the shop to buy pelmeni (dumplings) and smetana (sour cream). The sisters grew up in Kazakhstan, where their father worked, and went to a local, Russian-speaking school. They found the shop through Google and are excited to be preparing the food of their childhood in London “I haven’t had any pelmeni for ages”, said Jocelyn, who is currently studying Russian at Glasgow University.

The area around the shop has become a little Russian enclave. Besides the ‘Samovar’ café, there are DVD stalls, book stalls, a tiny shop full of matryoshkas, even a Russian barbers. Gofman’s wife, Tatiana, is keen to point out that Queensway has historic Russian connections. Local roads in the area include Petersburgh Mews and Moscow Place, so named to commemorate Tsar Alexander I’s visit to London in 1814. A sense of community has grown around the shop: “When we first opened, twelve years ago, people came just to talk, to hear Russian language and music”.

Svetlana Shaykina, who runs a treasure trove of a Russian souvenir shop in Queensway market explains that “we are all like family here” and – sadly – that she does a lot more listening than selling. She started the shop ten years ago with just one thousand pounds. “I like to draw and I thought I would sit here and draw matryoshkas,” she says. “At first we only just made enough money to pay the rent and eat.” Things improved, but now business has slumped again and she may have to close. “People buy a few things before Christmas”, she says, “but then in January and February, we still have to pay the rent. It’s impossible”. Keeping the shop going has never been easy; she nearly closed after the murder of Alexander Litvinenko. “Sasha Litvinenko often used to come into my shop,” she says, explaining her initial reluctance to talk. “Sometimes he met people here and there were quarrels, and then he died so suddenly and the shop was full of journalists all the time. It was awful.”

Svetlana’s is one of London’s few surviving Russian souvenir shops. “There used to be many”, she says “I knew them all. Now the only other one left is by the church near the Ritz”.

When I find Alex Tabunov’s cheerful stall of Matryoshkas outside St James’s on Picadilly he admits: “It’s very tough to be honest with you, but we still have regular customers who have bought from us for many years and we’ll still be on Trafalgar Square at the end of February to celebrate Maslenitsa (a Russian festival to celebrate the start of spring on 26 February)”. Tabunov’s mini London version of the huge Izmailovo craft market in Moscow also includes a few books of Russian art and folk tales.

From sci fi to sapphires

The Russky Mir shop on Goodge Street, sells books, groceries and runs a small cafe, but bills itself as a bookshop first and foremost and is also becoming a small cultural center. One London-based publisher specializing in Russian literature and linguistics recently used the shop as the venue for a reading from the English version of a new Russian novel being translated by young student, James Rann. Russky Mir’s collection of Russian books includes everything from the latest novels by sci-fi master, Viktor Pelevin to reprints of the Russian classics and foreign novels in translation.

The selection is rivaled by Grant and Cutler’s Russian language department in Foyles, round the corner on Charing Cross Road, where you’ll find plentiful materials for students of Russian as a foreign language at every level. They also sell cards, and calendars, which make good gifts.

If you are looking for expensive icons or jewelry, there are a number of top-end options. There is the magical Temple Gallery in Holland Park, which specializes in icons; or the fancy Erata Gallery in Mayfair for contemporary paintings. Round the corner from Erarta, a brand new Fabergé shop has opened next to the well-established Wartski’s.

For a more affordable selection, Iconostas, down the road in Piccadilly Arcade, has a range of ‘bargain icons’ as well as the pricier antiques. Owner, Christopher Martin-Zakheim, has been dealing in Russian antiques for nearly 40 years through changing times. “In the early days, 85 percent of the customers were American, mostly elderly. It was fashionable to collect Russian things back then; now the market has changed.” He still persists in selling a beautiful selection of old artworks at reasonable prices: “You can get an icon that is 300 years old for a tenth of the price of some of these contemporary paintings.” S.J. Phillps on nearby Bond Street has some extraordinary Russian antiques on offer if you have fifty grand or more to spare. Turquoise and moonstone, sapphire and amethyst, the descriptions of these pieces are the stuff of fairy stories.

A taste of home

At the other end of the spectrum, most Russian shops in London cater for more ordinary tastes and sell mostly food. The website www.russianshops.co.uk lists 85 Russian shops in Greater London. I set out to visit as many of them as possible, sometimes hunting down an address, to find the shop had vanished. Often, the remaining shops are more generically Eastern European than specifically Russian; almost every UK town has sprouted a ‘Polski Sklep’ at some point in the last decade and many of them survive to serve a wider community. Common culinary elements mean that they are useful suppliers for anyone struggling to get dried fish or pickled tomatoes in Tesco. Marinated woodland fungi, with sorrel or with dill, also tend to be in short supply in English shops.

One of the first Russian shops I walked into was the Baltika Mini Market at 32, Walthamstow High Street. This road is lined by one of Europe’s longest street markets, piled high with colorful fruit and veg, including yams and chilies, plantains or cassavas. The permanent shops are also brilliantly multicultural; you can walk into one and be transported into an aromatic Turkish coffee shop, while next door is full of incense, gold and silk saris.

Sure enough, just inside the door of Baltika, you catch the pungent whiff of authentic Russian food, a compound of cured meat, cabbage, sprats and vanilla. As ever, the windows are full of notices in Russian for flats and jobs sought and offered. On the way, I stumbled across another similar shop, ‘Arbat’, and bought a ring of dried bread rings of the kind you hang on the samovar. Since they are meant to be rock-hard for tea-dipping, they are easy to transport. Thick ‘Pryaniki’ gingerbreads, filled with poppy seeds or condensed milk, are another specialty that travels fairly well since freshness never seems to be their strong point even if you buy them in Tula where they are produced.

Matryoshka in Islington is a similarly typical Aladdin’s cave of nostalgia-inducing, authentic ‘produkti’ (groceries). Here, and at many other stores across London, you can buy Borodinsky bread, pancakes stuffed with sweet curd, red caviar, smoked sausages and horse radish with beetroot. There are certain staples that are not fully replaceable by English products. ‘Tvorog’ (a particular kind of cottage cheese) is one and is consequently ubiquitous; pickled cucumbers are another. English shops do sell them, but the recipe must be different, or perhaps it’s the classic expat comfort blanket of a familiarly branded jar, like the Spreewald gherkins in ‘Goodbye Lenin’.

And then there are drinks. Lightly-fermented, bread-based Kvas is one of those tastes that are sought-after by homesick Russians and acquired only with some effort by outsiders. Whole walls of these minimarkets are given over to bottles of vodka and syrupy ‘nastoyka’ so you can toast your Russian feast with flavors that range from cherry to pepper. Boris Gofman from Kalinka is also a musician and composer, adding the final ingredient to the Russian evenings he sometimes hosts. “My dream” he says “was to establish a Russian center where people could make themselves at home.”