The politics and arrogance of British aid to India 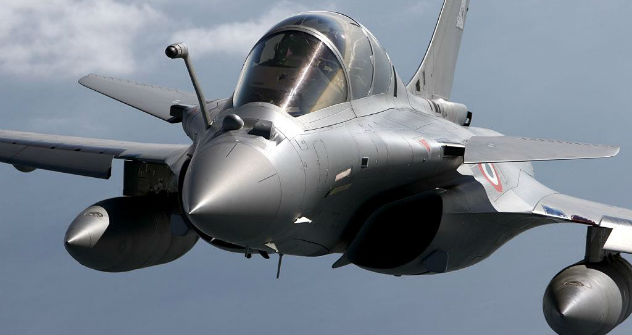 UK aid to India was never about helping the needy; it was always about buying influence, post-colonial arrogance and misplaced condescension. Now it transpires, it is also about Britain’s traditional penchant for unfair trade practices and sleaze.

Frustrated at the loss of a multi-billion dollar fighter contract to archrival France, the British lost all sense of propriety. Within hours of the Typhoon going down, the chatter on British news websites turned into a crescendo. All pretence of civility was cast aside as the British launched a vicious tirade against India. While the known India-baiters like the British media talked about India’s “ingratitude” and demanded that India rethink its decision, it was the reaction of the so-called liberals that was an eye-opener. The Labour Party’s Barry Gardiner, a self-styled friend of India, called for “downgrading” of India-UK trade relations.

It is peculiar that when something good comes out of India, sections of British society start carping about India’s poverty. No other country is as obsessed with India’s poor as Britain (although it is a notable subculture in other countries of the Anglosphere).

In 2008, when an Indian spacecraft discovered water on the moon, the British media was aghast that India was wasting its resources on such high-tech gimmicks while it has millions (sorry, hundreds of millions) of poor people.

A year later when India launched its first nuclear submarine, the British questioned India’s need for such expensive weapons when according to the Brits more than 800 million people survived on $2 a day (we’ll come back to that piece of World Bank fiction soon).

The lament is always the same: Why is Britain giving aid to a country that spends so much on its military?

In a tizzy over the Typhoon

The Hindu, a Chennai-based daily with communist leanings, is hardly the sort of paper you would call nationalist. Its London correspondent says he hasn’t witnessed such a level of public hostility towards India before. “The anger is palpable, cuts across party lines and — fuelled by the right-wing media — has percolated down to ordinary Britons on the street. Some of the reactions, especially on the Right, have a whiff of the hard-to-die old cultural arrogance: ‘how dare a country, a former colony to boot, and a recipient of our aid dare snub us?’ Expressions like ‘ingratitude’ are being bandied around with shrill calls for scrapping the aid to India,” writes the paper’s Hasan Suroor.

After it was kicked out of India in 1947, Britain kept up the pretence that it is fascinated by India. Their view was that the British Raj – if you ignored its brutal aspects – was the glue that bonded both nations. They argued that for Britain, India is like the high school crush – you never quite forget your first love.

But in recent years that mask has slipped. As Indian companies started snapping up the crown jewels of British industry (Corus, the UK’s largest steel company, Land Rover and Jaguar are now all run by Indian managers) the colonial aversion for Indians reappeared. It doesn’t matter that India is the second largest investor in the UK after Japan, generating tens of thousands of local jobs.

India’s relentless rise back to prosperity comes at time when Britain is in steep decline and poverty and hunger are common there. While India doles out more than $6 billion in aid to poor countries (including a generous multi-million pound sterling grant to Cambridge university), London’s arc of influence is shrinking. While the Royal Navy is to be scuttled to a littoral force of 19 ships, India is building a 300-ship navy.

The irony of the aid wasn’t lost on the British. “This sounds like something out of Alice in Wonderland,” wrote Britain’s Daily Mail, a right wing broadsheet. “A cash-strapped Western country, forced to slash its police budget by 20 percent, close libraries, sack soldiers and get rid of its aircraft carriers and Harrier jump jets, is giving money to an emerging Asian superpower. And the superpower does not even want the cash on the grounds that handouts damage its image.”

Wait, just how much is this aid that the British are so bitter about? Chew on this – a huge £280 million in annual British aid that the Indians should be grateful for. Just to keep things in perspective, that amount is approximately what India’s top cricketer Sachin Tendulkar makes from his endorsements. Or barely a sixth of what Mukesh Ambani, the richest man in India, spent on his new home in Mumbai (not something to be proud of, but handy for comparison).

The humongous irony is that India simply doesn’t want the money. Finance Minister, Pranab Mukherjee, and other Indian ministers tried to terminate Britain’s aid last year – but relented after the British begged them to keep taking the money.

In fact, Mukherjee mocked the UK’s contribution. “We do not require the aid,” he said in a reply to a question in parliament last August. “It is a peanut in our total developmental expenditure.”

Further, according to a leaked memo, senior Indian diplomat Nirupama Rao proposed “not to avail of any further British assistance with effect from April 1, 2011” because of the “negative publicity of Indian poverty promoted by Britain’s Department for International Development (DFID)”. However, London requested Delhi to keep taking the money because cancelling the programme would cause “grave political embarrassment” to Britain.

The politics – and dangers – of aid

The British have good reasons to continue the DFID’s work in India. The nation of shopkeepers has little to offer India by way of trade, so aid acts as a useful toehold. Britain’s Development Secretary Andrew Mitchell has left no room for ambiguity. In December 2011, he said the aid was “also about seeking to sell Typhoon jets".

He also revealed that the focus of the aid would be public-private partnerships rather than education or health. Translation: British aid is being diverted to schemes that sound uncannily like lobbying.

Anyway, appearing to care for the poor in India also does wonders for Britain’s self-esteem. Images of British citizens working amidst thin, unkempt street children reinforces the widespread belief in Britain that colonialism was okay because Indians are unfit to govern themselves.

Another spinoff is that having British natives on the ground in India is handy when it comes to recruiting informers and spies. This isn't as farfetched as it sounds. Employment in a nondescript NGO would be the perfect cover for British intelligence agents. Only someone incredibly naive would dispute that intelligence agencies routinely use such cover.

Also, at a time when Britain has become (in French President Nicholas Sarkozy's words) "an industrial wasteland", such aid programmes keep scores of Britons employed.

Amidst the volley of criticism, one of the few voices of support for aid to India came from Christian Aid. This outfit has a vested interest in keeping the aid pipeline flowing smoothly. Christian Aid is part of a consortium that manages a £25m DFID programme directed at India’s backward classes and tribal communities that have traditionally been targeted for conversion by fundamentalist churches.

Christian Aid, which unabashedly mixes evangelism and charity, is selling its own brand of salvation in India’s backward regions, potentially setting up future religious clashes between Hindus and newly converted Christians. Its agenda is very clear – the church-backed organisation is openly meddling in deep-rooted social conflicts. Instead of letting India’s various social groups sort out their issues amicably, agencies like Christian Aid are creating discord. The rise of Maoist guerrilla movements, backed by fundamentalist churches based in the Anglosphere, is just one example.

A record of bribes

What has shocked Indians is how the British assumed Delhi could be bribed. Post the Bofors howitzer scandal of the 1980s, India’s new defence procurement guidelines are so stringent that bureaucrats routinely cancel purchases at the slightest whiff of lobbying. If Britain believes aid can swing deals in its favour, then it is doing business with the wrong country.

But perhaps corruption is integral to British business. BAE Systems, the maker of the Typhoon, is alleged to have operated a multi-billion pound slush fund for paying bribes to members of the Saudi royal family and senior military officials. After 9/11, American prosecutors found documents to prove that some of the BAE kickbacks to the Saudis were used to bankroll at least two of the hijackers.

Margaret Thatcher’s son was also allegedly involved in this sordid affair. In fact, the American prosecutors said payments were made with the knowledge and authorisation of Britain’s Ministry of Defence officials.

What about the poor?

Britain doesn’t have to be concerned about India’s poor because: one, it has plenty of its own to worry about, and two, around 30-40 million Indians are lifted out of poverty every year thanks to India’s rising economy.

It is in this backdrop we introduce the World Bank-IMF propaganda that 800 million Indians live on $2 a day. First up, the World Bank is not really a world bank; it is an American bank that serves America’s interests. Their job is creating fake data and feeding it to the gullible media.

Just take a look at the number of Indians owning mobile phones – 800 million. You can’t own and operate a mobile phone if you earn $2 a day. Using meaningless exchange rates and sheer imagination, the fiction writers at the World Bank and IMF consistently churn out such outlandish claims to make people believe India is a poor country; a country that cannot survive without external aid. Too bad, other than some Gunga Dins for hire, Indians are not buying that any more.

As Tory MP Douglas Carswell said, “This is concrete proof that Britain's aid programme is run in the interests of Whitehall officials and the DFID machine. The fact is that India's economy is growing much faster than our own. We should be encouraging free trade with them and trying to learn from them rather than handing out patronising lectures.”

Britain is simply not in any position to moralise because it alone is responsible for India’s poverty. Britain’s rapacious colonialism turned India from the world’s richest country in the 1700s to one of the poorest by the time the British were kicked out in 1947. Within the span of 190 years, the British also killed as many as 80 million Indians through wars, displacement of populations and artificially created famines.

Amaresh Misra, a writer and historian based in Mumbai, argues in his epic book War of Civilisations: India AD 1857 that after the First War of Independence in 1857, British reprisal killings (which he calls an “untold holocaust”) caused the deaths of almost 10 million people over the next 10 years.

English author Charles Dickens, whose bicentennial is being celebrated this year, said after the 1857 war: “I wish I were commander-in-chief in India…I should proclaim to them that I considered my holding that appointment by the leave of God, to mean that I should do my utmost to exterminate the race.”

And how can you forget the view of The Guardian, the liberal voice of Britain? “We sincerely hope that the terrible lesson thus taught will never be forgotten,” it wrote about the genocide.

And finally, Winston Churchill, who described Indians as a “beastly race”. He caused the deaths of nearly four million Indians in 1943 by diverting food from India to Europe. It is known as the Great Bengal Famine during which the daily calorie intake of Indians was lower than the Jews in Germany’s death camps.

Forget aid, what India needs from Britain is an apology.