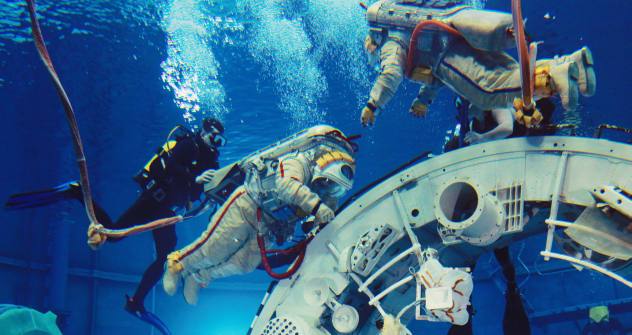 Star quality: A crew training on a submerged model of the ISS in the giant pool Star City. Source: RIA Novosti

In a break with tradition, Roskosmos is holding an open application process for cosmonaut training. By Feb. 6 it had received 25 applications for the position of astronaut, which had been advertised all over Russia. In addition to high academic standards, the Russian space agency is looking for people with the mental facility to endure the stresses of space travel.

At the end of 2011, Russian Federal Space Agency Roskosmos announced that it would hold an open competition to select the cosmonauts of the future. “We are making a few changes to the way we go about selecting astronauts,” said Roskosmos head Vladimir Popovkin.

On Feb. 6, Roskosmos revealed that it had received only 25 applications for the position, which had been advertised all over Russia. In contrast, when NASA recruited a new group of astronauts in 2009, the American agency received more than 3,500 applications from which it eventually selected nine candidates. Out of these 25 applications, four were chosen to continue in the selection process.

The space recruitment office has very high standards. In order to be considered for further training, applicants must have at least a Bachelor’s degree and five years’ work experience. They much also have a good knowledge of Russian, English and be aware of the basics of manned space flights. They must also be fit and know the history of space travel in Russia. Candidates applying to be pilots and test pilots must have at least five years of flying experience. Potential astronauts send their application letters, along with a whole range of other documents to a small town called Zvezdnoi just outside Moscow with a note saying “for the notice of the Commission on Cosmonaut Selection and Appointment.” But when the special commission at Moscow’s Yury Gagarin Cosmonaut Training Center evaluates applicants, it doesn’t look only at the candidates’ qualifications or their intellectual and physical attributes; it must also take into account applicants’ moral values, their ability to interact with other people, and what their experience shows about how hard they are willing to work.

All cosmonauts go through years of intensive training before they can finally be sent into space. The state of weightlessness puts the human body under tremendous strain, and the various stresses associated with space travel affect each cosmonaut differently. One of the immediate effects of space travel is mental confusion – without gravity, the body finds it difficult to know where it is; and as cosmonauts leave the earth behind, their bodies tell them that they are either permanently at an angle or completely upside down. Then there are changes in the way the cardiovascular system works: The outflow of blood means the heart, eyes and brain become starved of oxygen. This can impair muscle coordination and cause loss of vision. In space, the body finds it hard to absorb minerals, and as a result, the bones start to disintegrate, releasing phosphorous and calcium into the bloodstream. The cosmonauts’ muscles also start to become weak, and the muscular system starts to atrophy.

In addition to the physical discomfort, the monotonous routine in space stresses the cosmonaut’s mental state. Lethargy, apathy and fatigue are common traits of those on board a spaceship. Space travel puts a lot of strain on the nervous system, and astronauts often become emotionally tense with a tendency towards anxiety.

But for those willing to take the risks, Popovkin has announced that Roskosmos will continue to accept applications for its new class of cosmonauts until March 15.