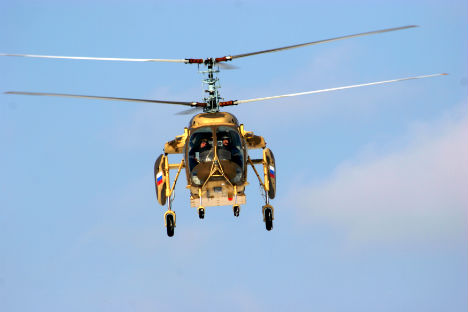 The Russian chopper Ka-226T participating in a tender to supply 197 reconnaissance and surveillance helicopters for the Indian air force and land forces has undergone all the test phases and the examination of bidders’ proposals is at the final stage, Rosoboronexport press-release says.

Rosoboronexport, the sole Russian intermediary for exports and imports of weapons and military equipment, has issued a press release confirming that the Russian Ka-226T light helicopter will soon defeat its European counterpart the AS550 C3 Fennec, manufactured by Eurocopter, in the tendering process to supply 197 reconnaissance and surveillance helicopters for the air force and land forces of the Republic of India. “All the test phases have been completed, and the examination of bidders’ proposals is at the concluding stage,” the company’s press office reports.

The marked advantage of the Russian proposal is its “cumulative” effect: the excellent Ka-226T rotary-wing aircraft is offered as a package with an offset programme that is attractive for the Indian side, this document says. First, under the offset programme Rosoboronexport, together with companies of the Russian Helicopters holding, is proposing to set up joint production of sub-systems and components for the Ka-226T, and subsequently to set up assembly of these machines in the Republic of India. Second, it proposes joint development of new modifications of the Ka-226T. And third, this programme will enable the two countries – which are strategic partners – to move towards full-scale industrial cooperation in the field of helicopter building. Russia’s huge experience in this sphere and the successful implementation of joint programmes in the field of aircraft building (production under licence in India of the MiG-21, MiG-27 and Su-30MKI aeroplanes) are a good basis for fulfilling the most ambitious objectives.

At the same time it is curious that as recently as October of last year the Russian Mi-28N “Night Hunter” combat helicopter lost out in a similar tendering process in India to the American AH-64D “Apache” attack helicopter developed by Boeing. At that time officials familiar with the way the tendering for attack helicopters was going noted that after tests had been carried out at the end of 2010 on the client’s territory and in the country of manufacture, including firing exercises using the helicopter’s weapons, the Indian side preferred the “Apache”. Thus a representative of the Western Air Command in Delhi stated that “both machines worked excellently, but at the same time the American one showed superiority in such key features as greater capacity and all-weather use”.

Russian specialists familiar with the Mi-28N say that it also possessed all these qualities in full measure. The fact that the Mil machine has only just begun to enter service with the Russian army, they explained, and that it will be more than a year before it can be supplied to India, while the “Apache” has been in production for many years and there will be no problems in procuring it, is another matter. This fact was evidently also a consideration in Delhi when they were deciding who had won the tender. What’s more, the Indians’ principle of “not putting all their eggs in one basket” also played its part. They are diversifying the military procurements. And in view of the fact that Delhi recently acquired 80 Mi-17 multipurpose helicopters from Moscow and is preparing to acquire another batch of similar machines, the outcome of the tender for attack rotary-wing aircraft was no great surprise for the Russian side, especially as it is hoping to win in other similar contests. This is primarily in the light and universal helicopter class: aircraft such as the Ka-226T.

Its creators maintain that this helicopter compares favourably with its competitors on the global arms market and is ideal for reconnaissance, transporting loads and carrying out search and rescue operations in inaccessible regions. Thanks to its coaxial rotor system, the Ka-226T has a big thrust capacity and a high rate of climb, which increases the helicopter’s static ceiling. The aerodynamic symmetry and lack of cross coupling in the control channels make it easier to pilot the helicopter, which is especially important in low-altitude flying. Such a machine is more manoeuvrable across the whole range of speeds. The Ka-226T helicopter is ideally suited to missions in mountainous areas and in high temperatures.

With a maximum take-off weight of 3,600 kg, it can carry a 1,200 kg payload in its transport compartment – one-third of its take-off weight! With an underslung load, the Ka-226T can carry 1.5 tonnes. The helicopter’s crew is one person. It can take up to seven passengers on board. The machine’s cruising speed is 220 kph. Its practical ceiling is 5,700 m, while its range is 600 km with basic fuel tanks and 750 km with additional tanks. An expanded range of capabilities in terms of precision manoeuvring, rate of climb and flight altitude (up to 7,000 m) can be supplied at the request of the client. This means that the Ka-226T can carry out rescue and transport operations on the slopes of the world’s highest mountains, flying almost to their s ummits.

The helicopter is surprisingly forgiving and does not need to be housed in a hangar. It is equally good when operating in temperatures from +50 to -50 degrees. To land, all it needs is a patch of relatively even surface measuring 15 by 15 metres if there is open access. This could be a car park, a school playground, a playing field, or simply a piece of waste ground. If there are no open approaches, it still doesn’t need a very big spot – 35 by 35 metres. A few people with chainsaws descending from the helicopter by rope could clear an area like this literally within an hour, even in the jungle.

The Ka-226T’s excellent flight characteristics and its high level of durability are due in part to the fact that it has two modern Arrius 2G1 engines manufactured by Turbomeca, which have enough power, which is critically important in high mountainous areas and in regions with a hot climate. Even if one of the engines fails or is damaged, the helicopter can continue flying on one.

Incidentally, the Ka-226T performed very well during the evaluation trials conducted earlier in India as part of the tendering process. These trials showed clearly that the Ka-226T embodies the best achievements of the Kamov school of design – modular construction, which makes the helicopter multifunctional, a simple piloting technique, a low level of vibration, a high degree of reliability and safety in flight, and easy maintenance.

The Kamov helicopter may also be helped to win in the Indian tendering process by the fact that the Ka-226T is also flying in the Russian Federal Security Service and the Ministry of Emergency Situations, and has been put into service by the Ministry of Defence. A batch of these “choppers” was recently delivered to the Military Helicopter Pilots’ Retraining Centre in Torzhok. Moreover, there is lively interest in this machine outside Russia. Jordan wants not just to buy this machine but also to assemble it on its own territory. So Delhi has a chance to overtake Amman, and even to leave it trailing. The Russian M-26 is taking part in yet another tender to supply heavy helicopters to the Indian air force. It has no rival on Earth.