The decline of the West revisited 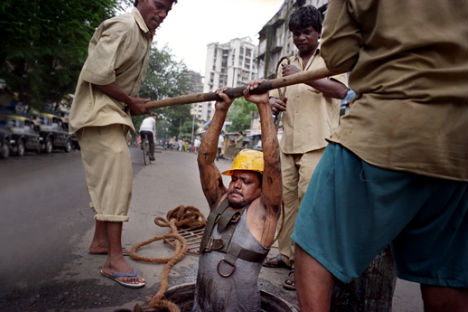 "A hundred oligarchs in India hold assets equivalent to 25 percent of the country's GDP, while 800 million of their compatriots survive on less than a dollar a day". A sewage worker in Mumbai. Photo: Jacob Carlsen

Since the publication in 1918 of the first volume of Oswald Spengler's "The Decline of the West," prophecies about the inexorable doom of what he called the "Faustian Civilization" have been a recurrent topic for intellectuals.

The current crises in the United States and Europe — the result primarily of U.S. capitalism's inherent ethical failures and of Europe's dysfunction — might be seen as lending credibility to Spengler's view of democracy's inadequacy. It also speaks to Spengler's dismissal of Western civilization as essentially being driven by a corrupting lust for money.

But determinism in history has always been defeated by the unpredictable forces of human will and, in this case, by the West's extraordinary capacity for renewal, even after cataclysmic defeats. True, the West is no longer alone in dictating the global agenda, and its values are bound to be increasingly challenged by emerging powers. But its decline is not a linear, irreversible process.

There can be no doubt that the West's military mastery and economic edge have been severely diminished recently. In 2000, the United States' gross domestic product was eight times larger than China's. Today it is only twice as large. Worse, appalling income inequalities, a squeezed middle class and evidence of widespread ethical lapses and impunity are fueling a dangerous disenchantment with democracy and a growing loss of trust in a system that has betrayed the American dream of constant progress and improvement.

As for Europe, the euro-zone crisis has exposed democracy's weaknesses in dealing with major economic emergencies, as well as the flaws in the European Union's design. In Greece and Italy, technocratic governments have taken over from failing politicians. In Hungary, Prime Minister Viktor Orban has pressed for an authoritarian "re-establishment of the state." Such cases seem to point to the return of a European past in which democracy's failures gave way to more "expedient" forms of government.

And yet, while Europe remains a question mark, economic growth and job creation, however fragile, are back in the United States. Moreover, even if China becomes the world's largest economy in, say, 2018, Americans would still be far richer than Chinese, with per capita GDP in the United States four times higher than in China.

To be sure, income inequality and social injustice are a concomitant of capitalist culture throughout the West. But challengers like China and India are in no position to preach. Compared to Indian capitalism, capitalism's ethical failures elsewhere look especially benign. A hundred oligarchs in India hold assets equivalent to 25 percent of the country's GDP, while 800 million of their compatriots survive on less than a dollar a day. Politicians and judges are bought, and natural resources worth trillions of dollars are sold to powerful corporations for a pittance.

Having the largest economy is vital for a power aspiring to maintain military superiority and the ability to define the international order. Hence, the receding power of the West means a tougher fight to uphold the relevance of key components of its value system, such as democracy and universal rights.

Europe, with its almost post-historical mentality, has long abandoned the pretension of being a military power. The same cannot be said of the United States. But rather than reflecting a decline in its military superiority, the United States' setbacks in Iraq and Afghanistan are the result of wrongheaded policies that sought to use hard power to solve conflicts that were simply not amenable to it.

The recent massive cuts to the U.S. military budget need not signal decline. They can launch an age of smarter defense, one that relies on innovative ideas, strong alliances and building partners' capacity. The shift of U.S. military priorities to the Asia-Pacific region is an understandable strategic rebalancing, given the United States' excessive focus on the Middle East and its maintenance of an unnecessary military presence in Europe.

Tempered by the U.S. public's fatigue with overseas adventures, the United States' missionary zeal to save the world from the wickedness of faraway autocrats will be reduced substantially. But this does not necessarily mean that China will automatically take over ground from which Washington withdraws. Despite the recent cuts, the U.S. defense budget is still five times higher than China's. More important, China's long-term strategy requires that it focus in the short term on satisfying its vast appetite for energy and raw materials.

Make no mistake: Euro-centrism and Western hubris have been dealt severe blows in recent years. But for those in the West overtaken by fatalism and self-doubt, a message of hope is now emanating from the Arab Spring and from the resumption in Russia of the unfinished revolution that ended communism. Nor has the inconsistency between China's capitalism and its lack of civil liberties been resolved yet. A Chinese Spring cannot be ruled out.

The West faces serious challenges — as it always has. But the values of human freedom and dignity that drive Western civilization remain the dream of the vast majority of humanity.

Shlomo Ben Ami is a former Israeli foreign minister who now serves as the vice president of the Toledo International Centre for Peace. He is the author of "Scars of War, Wounds of Peace: The Israeli-Arab Tragedy." © Project Syndicate