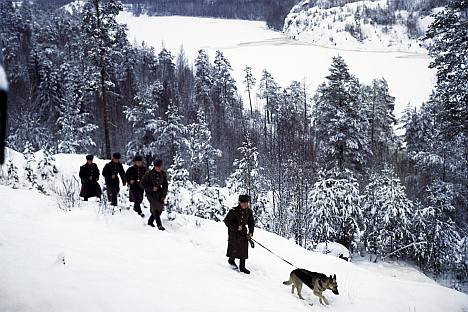 On the Russian border with Ukraine, the lack of jobs has made smuggling diesel fuel an attractive way to make money. Combating the illegal pipelines is a full-time job for the region’s border guards.

When the Soviet Union disintegrated, the border between Russia and Ukraine ran right through the outskirts of the town of Donetsk, a mining community with a population of 50,000. In the chaos of that time, many of the mines that provided jobs for the local population were shut down, and the residents of Donetsk struggled to make money. But miles of pipelines stretched under the newly created border, and eventually pumping cheap diesel fuel from Russia to Ukraine became the answer to the question “How do you make a living?”

The method for smuggling fuel and lubricants in Donetsk is a simple one – lay an underground pipeline, connect it to a portable pump station, and you have a way to transport diesel fuel to Ukraine. The difference in price, close to eight rubles ($.25) a liter, means over a million rubles ($33,000) in profits in one night.

For this scheme to work effectively, two components are required. The first is a “mole” – a special machine that lays pipes. It is managed by an operator who sets the depth and horizontal drilling parameters with minor adjustments via GPS. The machine does the rest itself – it coats the walls of the hole with quick-drying concrete and the new pipe is ready to transport fuel in a few hours. The second component is the supply and sales channels. It is very hard to get to those who arrange this business and front for it – the work is done by the same whistlers, transporters and other hired workers, who often do not even know who they work for and who pays them.

The border guards trying to crack down on this trade work at night, looking for the tell-tale signs of smugglers.

“Nearly all SUVs in town belong to smugglers, or rather transporters,” said one guard, explaining that a cheap, Russian-made SUV covered in mud is a clue. “They drive across the fields – maybe looking for the right spot, maybe getting ready to deliver a new batch.”

The smugglers themselves are aided by “whistlers,” local people who inform the smugglers about the movements of the border guards. Whistlers are normally sighted late at night, especially close to spots where smugglers plan to transport the goods. They sit in cars, alone or in pairs, watching for the guards and informing their colleagues if they see one drive by.

Underground fuel transportation is a relatively new phenomenon for Donetsk. Smugglers used to be bolder – they would transport fuel in cisterns that crossed the border almost in convoys. This audacity was attributed to reliable protection from the local police and border patrol. Since Russian border guards became part of the FSB system, however, smugglers have had to take their pumping business underground.

One night, the guards learn about a batch of diesel fuel about to be pumped into Ukraine through pipes located under a private house. Late at night, they enter the smugglers’ neighborhood – an area of single-story houses surrounded by fences and gardens. The house in question is old and appears uninhabited. It has an iron gate and a sign in front that reads “scrap yard.” Forty minutes later, the iron gate opens and a vehicle drives in – the guards guess it is a van, judging by the sound of the engine. A short time later, they have a voice say: “All clear. Turn it on.”

The border guards jump over the fence and find themselves next to the smugglers’ vehicle. They yell: “Border patrol! Nobody move!”

Although most of the whistlers manage to run away, the driver who brought the consignment and the supervisor who operates the pump are handcuffed before they understand what has happened. Mission accomplished.

After the border guards take the suspects into custody, the officers of the Interior Ministry and Federal Customs Service take over. The police and customs officers draw up protocols, interrogate the apprehended smugglers, check the merchandise and work with attesting witnesses.

A large barrel welded on to the van floor holds about three tons of diesel fuel, which is not enough to put the perpetrators behind the bars – the value of the merchandise is too low. But near the foundation of the house, barely covered with a few rusty metal sheets, is a pipe with a valve. Inside the house, there is a hole in the floor where the smugglers installed the pump. Three feet or so below the surface lies the rest of the pipe, which leads to Ukraine. The guards pull the pipe out of the floor and hand it over to the customs officers along with the fuel.

This article is abridged from the original version in Russian, which is available in the Russiky Reporter magazine.