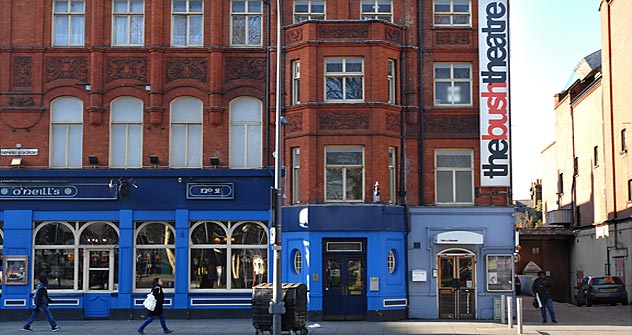 A talented British playwright is turning his spotlight on the recent demonstrations against electoral fraud in Russia.

{***Capturing the drama of Russia’s protests***}

Jonathan Holmes, a highly acclaimed British writer and director, plans to stage a work-in-progress at the Bush Theatre, Notting Hill, in mid-March based on the recent demonstrations against electoral fraud in Russia. Holmes hopes that early raw performances of his new play might generate some debate about the goals and causes of the protests. Elements of these discussions could then become part of the larger production, scheduled to take place this fall.

Holmes said his interest in Russian politics started as a child, when the collapsing Soviet Union still had a quasi-mythical status among the militant left movements of 1980s Britain, but this is not the first time Holmes has taken international events and dramatized them, with sometimes controversial results.

His 2007 play “Fallujah,” about the occupation of Iraq, provoked death threats, but it also helped publicize the use of chemical weapons in the title city. The site-specific “Katrina” in 2009 was similarly groundbreaking, drawing on verbatim testimonies from survivors of the New Orleans hurricane to expose the negligence of the U.S. authorities in the aftermath of the disaster. The theater critic for British daily the Guardian called it “a staggering picture of official lies and personal heroism.” Holmes explained that it is a sense of underreported histories that draws him to these controversial topics: “When you question the silence, controversy follows. I don’t enjoy the hate mail, but it’s usually a sign that you’re doing something right,” he said.

In the case of his latest project, Holmes says he has long had the feeling that “Russia was being startlingly underestimated and undervalued by mainstream commentary” and now has “the sense that something momentous is passing us [in the West] by.” He sees the demonstrations as particularly suited to dramatic treatment: “Protests and rallies are, of course, performative; their relationship to space and to audience is purely theatrical. They share this with religious rituals. Theater was born from such moments,” Holmes said.

Before he became a playwright and director, Holmes was a senior lecturer in drama at the University of London. His Ph.D. thesis was on Shakespeare in performance, and he has since written books on the subject, so he is well placed to explore both the roots and the experimental cutting edge of theatrical practice.

Holmes sees ethical questioning and interaction with the audience as crucial components of traditional drama. He welcomes the expression of different views as part of the ongoing process of creation. “All I want to do is rediscover something we’ve lost, which is the ability to participate,” Holmes said.

In his plays, members of the audience are often free to move around and make judgments about how close to stand to any particular character. Holmes admits that he now finds conventional plays increasingly hard to watch: “I can’t figure out why the people with the lights pointing at them are ignoring those of us in the dark – which is an apt metaphor, I suppose, for the connection of theater with current enthusiasms on the streets and squares of Moscow.”

{***Jonathan Holmes: Following Russian politics is a habit for me***}

British playwright Jonathan Holmes has created a new play based on the recent protests against electoral fraud in Russia. Russia Beyond the Headlines contributor Phoebe Taplin spoke with Holmes about his interest in Russia and what he hopes to accomplish with his play.

Russia Beyond the Headlines: How long have you been interested in Russian politics? How did this interest start?

Jonathan Holmes: In a vague sense, since childhood. It began by reading, aged 12, of all things Arthur Ransome’s autobiography, and his wonderfully romantic descriptions of meeting Trotsky and Lenin. This coincided with increased television coverage of the dissolving iron curtain and, eventually, the unraveling of the Soviet Union. So the beginning and the end of the Communist project lodged in my imagination at roughly the same moment, and at an impressionable age.

At the same time, growing up in South Yorkshire I was witness to active politics of the militant left, with open discussion of communism, socialism and a relationship with Russia the norm. The name that had a rather mythical place in my mind began also to exert a more local influence. By the time I was discovering Russian theater, literature and film at university, there was a kind of imaginative hinterland within which to locate this work.

By the time Yeltsin subsided in favor of Putin, following Russian politics had become something of a habit for me, and this was deepened by an increased sense that, even though I was regularly reading impressive pieces of English and American reportage about the regime, Russia was being startlingly underestimated and undervalued by mainstream commentary in general. So for the last eight or ten years I’ve made it my business to stay as informed as I had time to be (not knowing the language) about developments there. In short, it’s been an incremental infatuation.

RBTH: You seem to have no fear of controversial topics; rather the reverse. What is it that draws you to potentially explosive themes ?

J.H.: It’s not the controversy that demands attention, it’s the silence. With “Fallujah,” no one was talking about what was clearly the most significant, and brutal, episode in a nasty war. This in itself seemed close to a crime. With “Katrina,” everyone was talking about the hurricane, but few at the time discussed the negligence that followed, nor the extraordinary resilience of the community in New Orleans. With the new piece about Russia, it’s again the sense that something momentous is passing us by. And so far, it’s been the case that when you question the silence, controversy follows. I don’t enjoy the hate mail, but it’s usually a sign that you’re doing something right.

RBTH: Your previous works have emphasized the power of theater to surround the audience. Can you say any more about why/whether this is especially relevant here?

J.H.: Demonstrations and street (or square) protests and rallies are of course performative; their relationship to space and to audience is purely theatrical. They share this with religious rituals. Theater was born from such moments, if you go back far enough. There are few art forms better equipped to discuss these activities. And metropolitan Russia at the moment is filled with debate and discussion about what to do next; I’ve a feeling that a microphone hidden in the right places (and I’m sure there are plenty of those) would relay instances of drama so well-crafted you could transplant them onto the stage with barely a tweak.

RBTH: You talk about the power of theater to enact change. Are there any particular changes you would like to see occur in Russia?

J.H.: Well, that’s obviously a rather large question... I think there’s a sense, not only in Russia, that old-style, top-down autocracy has had its day. This isn’t even an ideological response, I think, it’s almost aesthetic in nature, which is part of why I think the arts are well-placed to discuss it. Old systems are just so old-fashioned and embarrassing, and embarrassment is a great political motivator. One of the outcomes of the capitalist revolutions of the late ‘80s and early ‘90s has been an amplified rhetoric of individual choice. It’s designed to make us better consumers, of course, but a by-product of that has been to foster a generation of young people wanting to extend that choice to all aspects of their lives, and shrewdly educated in how to do so. Old-style dictatorship is not well placed to deal with this. This isn’t to say that dominant structures won’t remodel themselves into something more subtle and remain just as much in control, but for now the emphasis is on self-determination. It’s unguided by ideology or program, but it’s there. And in the gap before something else takes over, there will be opportunities, and some of these are for greater openness and transparency. I have a cautious wish for these moments not to be entirely lost.

RBTH: The audience seems to be a crucial part of your work rather than passive observers. There also seems to be a strong emphasis on the ethical dimension of theater in your work. How do you expect these aspects to manifest themselves in this latest project and what do you see as theater's unique virtues?

J.H.: I’ve always been struck by the obvious fact about theater that it’s the only art form actually to manipulate the everyday material world. It happens in real time, with real people, in a real space and it usually deploys broadly realistic modes of delivery, or at least techniques related to them. It can’t exist without an audience present. When you go to the theater, you’re having an experience of the same order to the rest of your life, only more intense. This isn’t the case with novels or even live music, for example. The politics of this are obvious – that’s why drama was invented, as a way for communities to talk to themselves at one remove. The notion of a passive audience, coyly peering out from behind the fourth wall, is a very modern invention, but it’s been around for long enough for us to forget the alternative, and for us to relate to plays largely the way we do to books or films. And this is unhelpful. For centuries the norm was more interactive. Shakespeare wrote soliloquies not because characters were talking to themselves, but because they were addressing the audience. So all I want to do is rediscover something we’ve lost, which is the ability to participate, even quietly and modestly. And participation, of course, is ethical.