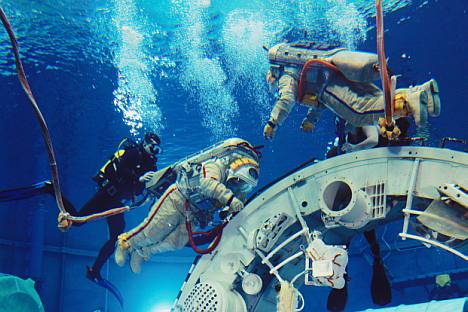 Star quality: A crew training on a submerged model of the ISS in the giant pool Star City. Source: RIA Novosti

Russia has been a trailblazer in space travel and produced legions of world-class astronauts. But the vocation of space travel does not seem to have many takers these days. Only 25 Russians applied to become cosmonauts at a recent competition!

Russian cosmonauts are famous the world over, but it seems flying to the moon or space is no longer on top of the Russians’ wish list. Towards the end of last year, Russian Federal Space Agency Roscosmos had announced an open competition to select the cosmonauts of the future. But instead of a deluge of applications expected, there were just 25 hopefuls who applied for the position, which had been advertised all over Russia. In contrast, when NASA was recruiting cosmonauts in 2009, they received more than 3,500 applications, with only nine candidates eventually making the grade.

“We are making a few changes to the way we go about selecting cosmonauts,” says Vladimir Popovkin, the head of Roscosmos. Future cosmonauts are selected by a special commission at Moscow’s Yuri Gagarin Cosmonaut Training Centre. Out of the 25 candidates, only four made the grade. “Having looked through all the 25 applications we have received so far, the selection committee has decided to invite four of the strongest candidates to take part in the next stage of the selection process,” says Roscosmos.

However, there is still hope for wannabes. Last week Popovkin announced that the recruitment process will run until March 15 2012, so anyone who wants to become a cosmonaut and has dreamed of flying to the moon still has time to apply.

But the space recruitment office has very high standards. The aspiring candidates must have higher education and five years’ experience working in this field, a good knowledge of Russian, English and the basics of manned space flights, a high level of fitness, and a thorough understanding of the history of space travel in Russia. The candidates – pilots and test pilots – need to have at least five years’ flying experience, and be pilots of the highest calibre. Potential cosmonauts send their application letters, along with a whole range of other documents – more than eight in total – to a small town called Zvezdnoi just outside Moscow with a note saying “for the notice of The Commission on Cosmonaut Selection and Appointment”.

When selecting the cosmonauts, the committee doesn’t just look at a candidate’s qualifications and their intellectual and physical attributes – they also take into account his or her “moral values, the way the applicant interacts with other people, and how willing they are to improve themselves”.

Is it easy to be a cosmonaut?

It’s no coincidence that all cosmonauts go through years of intensive training before they can finally be sent into space. The state of weightlessness puts the human body under tremendous strain, and it goes without saying that everyone’s reaction is different, and various stresses associated with space travel affect each cosmonaut to varying degrees.

One of the immediate effects of space travel is mental confusion - without gravity, the body finds it difficult to know where it is; and as cosmonauts leave the earth behind, their body tells them that they are either permanently at an angle or completely upside down. Then there are changes in the way the cardiovascular system works: the outflow of blood means the heart, the eyes and the brain become starved of oxygen. This can impair muscle coordination and impair vision. In space the body finds it hard to absorb minerals, and as a result the bones start to disintegrate, releasing phosphorous and calcium into the bloodstream. As if this wasn’t enough, the cosmonauts’ muscles also start to become weak, and they become increasingly inactive. A lack of physical activity causes a lot of health problems as the muscular system starts to atrophy.

A monotonous routine on board the ship, in an enclosed space where the cosmonaut is surrounded by the same people and objects day in day out, with an almost unchanging view out of the spaceship windows, can soon lead to depression. Lethargy, apathy and fatigue are common traits of those on board a spaceship. Space travel puts a lot of strain on the nervous system, and cosmonauts display a tendency to anxiety.

Space radiation is another serious threat to the health of space travellers. This can be caused by electromagnetic radiation and streams of electrons, positrons and other charged and neutral particles. Large doses of radiation can cause mutations in the chromosomes within the cosmonauts’ cells.

So, although many dream, only the bravehearts who have their minds and hearts into space travel go on to become cosmonauts.