Syria: Russia must look out for its own interests 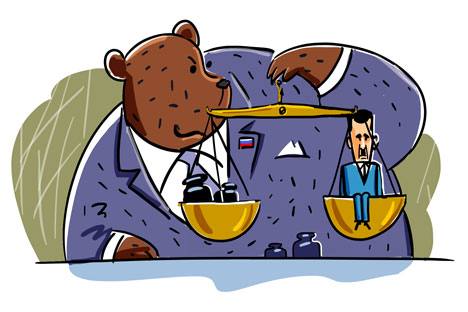 Moscow’s current strategy in the Middle East allows Russia to save face and bide its time.

The current situation in the Middle East provides fresh proof that the end of the multi-polar world is drawing nigh. The emerging geopolitical situation looks not so much multi-polar, as a world without poles, where the role of world policeman is performed poorly, no matter who takes it on.

The U.S. and Europe are suffering from financial troubles and recent actions by NATO have damaged the credibility of the alliance. In the absence of a powerful ideological adversary like the Soviet Union was, any attempts to mobilize the Western community against another “axis of evil” have met with general failure.

Today countries once considered secondary players in world events, such as Turkey, Iran and China, are pursuing independent policies and regaining their historical spheres of influence. The same is true for India, Japan, South Korea, South Africa and some of the countries in Southeast Asia and the Middle East. In the past, these countries may have been dependent on the West for the advancement of their interests, but today they are pursuing their own agendas.

This is especially true in the Middle East, where both the once pro-Soviet circles and Western-leaning liberals were equally rejected during the Arab Spring. Power in North Africa is now contested by the Muslim Brotherhood and its numerous clones, Salafites and traditionalists supported by Arab monarchies. For this part of the world, the West is a potential partner and market and Russia is irrelevant.

The fall of the authoritarian regimes in North African countries has created not only a power vacuum, but also a glut on the modern weapons market, including that for portable anti-aircraft missiles, anti-tank missiles and heavy mines. This has ushered in a new stage of sabotage and terrorist warfare waged by Al-Qaeda, Al-Shabab, the Nigerian group Boko Haram and similar Afghan-Pakistani groups from Jundallah in Baluchi to the Pashto Taliban. With rare exceptions, such as the Syrian wing of the Palestinian Hamas movement, they oppose not only secular rulers and the West, but also Russia.

Paradoxically, the only stable border across which arms and fighters are not pouring into Syria is that with Israel. Jerusalem, which is officially at war with Damascus, is interested in the stability of that country, since the break-up of Syria is sure to trigger a chain reaction in Lebanon, Jordan and on the West Bank.

The UN’s role in the Syria crisis is technical, although, as the example of Iraq has shown, the U.S. does not need its approval to launch military operations. Nevertheless, it is easier to secure the approval of military budgets by European parliaments if there is a UN mandate for such operations, and support for use of force is essential for NATO.

Russia’s options regarding the situation around Syria are limited. Supporting the West has never, over the past 25 years, brought Russia what it hoped for or had been promised. The West does not see Moscow as an equal partner. So, if some group needs Russian support in Syria and, especially, in Iran, it will come at a price. The price is measured not in finances but in the oft-proclaimed Russian geopolitical interests that have been ignored by the international community throughout the post-Soviet period.

Moscow’s current strategy enables Russia to save face and bide time in its own interests. For Russia, neither the West, Iran, or the Arab monarchies are allies – nor can they be. Their interests are at odds with Moscow’s, be they economic, religious or political.

A strike on Iran or Syria, if it ever happens, will weaken those who launch it. And whether or not there are more regime changes in the Middle East is not Russia’s problem. Looking at the example of Iraq and Afghanistan, the Middle East situation cannot be controlled from the outside.

Yevgeny Satanovsky is the president of the Middle East Studies Institute. The full text of this article is available in Russian here: http://vpk-news.ru/articles/8598