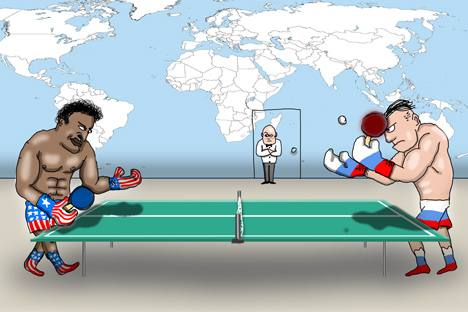 The U.S. should be thankful for anti-American sentiment in Russia – Russia is the only country that still thinks the United States is capable of causing international chaos.

There has been an uptick in anti-American sentiment in the Russian blogosphere recently. Deputy Prime Minister Dmitry Rogozin said that the failure of the Phobos-Grunt mission – far from the only Russian space mishap in recent years – could have been caused by emissions from an American radar station. The response was powerful: We knew they were to blame! This was not the cause, but try convincing anti-American Russians of that.

Washington should cherish Russian anti-Americanism, as Russia is probably the last important country in the world to sincerely believe in America’s omnipotence. Everyone else is talking about the end of the unipolar world, waning U.S. influence, and how the United States must restrain its ambition. Russia, however, is not interested in the facts. On the Russian Internet and in other public domains, Americans are behind everything. If Europe is in debt crisis, the U.S. is to blame for protecting the dollar from the euro, trying to destroy the rival currency. Rallies for honest elections in Russia are explained as a U.S. conspiracy to launch a color revolution and establish a loyal regime in Russia. Even abnormally hot weather in Moscow is blamed on the U.S. Anti-American sentiment was particularly pronounced a year ago, as the Arab Spring unfolded in the Middle East. Approximately two-thirds of the guests on Russian TV talk shows agreed that changes in the region were definitely engineered by Washington. Not all of them could explain why Washington was doing this, but you can always invent arguments to support your cause.

Anti-American sentiment is widespread in the world. It would be strange for a leading world power, assured of its own moral supremacy and willing to use force to protect its interests, not to encounter resentment and condemnation, even if it is simultaneously admired for its many and diverse achievements and many of its critics willingly go to live, study and work in the United States.

Russia is not the most anti-American country. According to a survey conducted by the Pew Research Center in 2009, more people have a favorable view of the United States in Russia (44 percent) than in Turkey (14 percent), Pakistan (16 percent), Jordan (25 percent), Egypt (27 percent) and Argentina (38 percent), even though these countries are either nominally U.S. allies or close partners.

Anti-American sentiment in Russia is not particularly virulent either. It does not compare with the genuine, deep-seated anti-Americanism of left-wing intellectuals in France. Their renunciation of the American way of life and the American style of conduct is rooted in their belief that their culture is superior, whereas in Russia anti-Americanism is rooted in an inferiority complex borne of its defeat in the Cold War. The end of the global confrontation essentially destroyed Russia’s international stature. The United States gained almost everything that the Soviet Union lost. Russian public and political consciousness is still unable to process this, although the Soviet Union would have behaved in the same way if it had won.

The Russian attitude to America is a complicated mixture. It is partly cynical – disbelief that a country can be guided by anything but mercantile considerations. There is also the messianic inertia – both the Russians and the Americans have always believed in the special mission of their nation, although now it is hard to understand what is left of it. The internal trauma from the collapse of the Soviet Union in 1991 is intertwined with a subconscious desire to be like America and a simultaneous realization of the impossibility of reaching this goal.

To be fair, American policy perplexes even supporters of the United States. The U.S. shocks the world with its deep conviction that as “the beacon of freedom,” it can sit in judgment of the rest of the world and make them do the right thing, even by force. Meanwhile, American policy is often dogmatic, not free of mistakes and certainly not morally beyond reproach. There is nothing beyond reproach in international relations, but in the case of the United States, the gap between words and deeds is sometimes shocking. Any criticism of U.S. policy in Russia is attributed to persistent anti-Americanism, although Washington gives sufficient grounds for justified criticism.

We should replace our anti-Americanism not with love for the U.S. (which sometimes develops into a bizarre form of worship in this country) but a calm, rational and detached attitude to the United States – an interesting, intricate and equally contradictory country –  based on an understanding that the interests of two enormous and completely different countries cannot coincide.

Strategic competition is a normal and natural thing. The United States is a powerful country that plays the leading role in the world (at least for the time being) and seeks dominance over its partners. However demonization of America, morbid obsession with America, a compulsion to rebuff every remark by some ageing senator who is still stuck in the Cold War merely reflect our phobias and complexes rooted in Russian’s fractured political consciousness.

Several years ago, two American scholars, Andrei Shleifer and Daniel Treisman, published an article about Russia entitled “A Normal Country” that caused an uproar. They set out to prove that for all the unique features of post-Soviet Russia, developments in Russia remain within the bounds of predictability and that it should be approached without illusions or fatalism. It is time for a Russian to write an article by the same name about America. It would help free us from our paranoia and unjustified expectations of the United States.