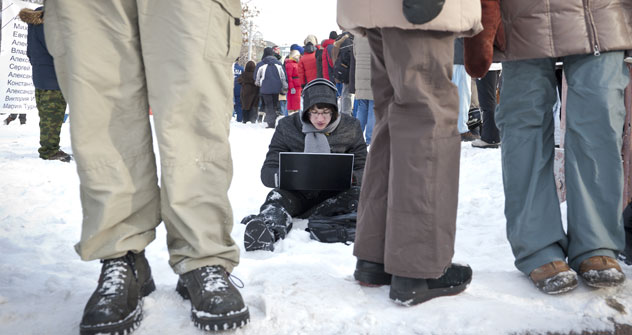 Social networks mirror the social capital and expand the circle of trust between people. Pictured: Participants of the Feb. 4 rally in support for honest elections. Source: ITAR-TASS

While the recent street protests in Russia seem to be all about politics, sociologists and economists believe that they are really the result of stagnation, which makes them an even more potent force.

At the beginning of December 2011, no one imagined that the streets of Russia would be overrun with people protesting. All public opinion polls showed that the level of social capital – the mutual trust among people that enables them to act together for a common cause – was too low. But, said economist Alexander Auzan, these polls did not take into account the influence of social networks, which mirror the social capital and expand the circle of trust.

For Russia, this is good news. Social capital ensures the effectiveness and accountability of government, the quality of state services and effectiveness of institutions. But what is the root of this increase in social capital?

Mikhail Vinogradov, president of the Petersburg Politics Foundation, believes that while it is possible that the protesters were genuinely unhappy about the general outcome of the State Duma vote, their frustration had deeper roots. “The rallies were not for fair elections, but against Putin,” Vinogradov said. And not just Putin as an individual, but the lack of change he represents. Russia has been plagued by stagnation in recent years. The country has been slow to recover from the global financial crisis; the growth in real incomes in 2011 was a symbolic 0.8 percent. The effect of this stagnation was compounded by the prime minister’s decision to take another run at the presidency.

According to Natalya Zubarevich, director of the regional program at the Independent Social Policy Institute, 38 percent of all Russians have no hope at all for their future. This despair stretches across all regions of the country, but it is particularly acute in small towns with a population of under 20,000. They are almost a country of abject poverty, where there is no capital – social or otherwise. It is an area where people focus completely on just surviving.

Then there are the medium-sized industrial cities that are home to about 25 percent of all Russians. Incomes in these areas are growing more slowly than in the country in general, and these cities no longer draw people. Young people who leave them to work or study do not return and social mobility is very low.

Finally there the Russia of cities with a population of more than 500,000. These cities vary in their major characteristics. Two of them are the megapolises of Moscow and St. Petersburg; others are primarily industrial, while still others have already experienced a significant level of de-industrialization. These cities have a high proportion of educated people and with high levels of income. The process of post-industrial transformation here has given rise to a middle class. These people are, in many ways, a product of the prosperous 2000s.

Vkontakte, Russia's most popular social network brings together about 62 percent of Russian internet users leaving behind its American counterpart Facebook (around 18 percent of Russians use it). Source: The data based on a poll conducted by VTsIOM. Graphic by Niyaz Karim. Click to enlarge.

“Over the last 10 years, Russia has been growing ever more prosperous, while the institutions have been steadily deteriorating,” said Leonid Polishchuk, head of the Applied Institutions and Social Capital Analysis Laboratory at the Higher School of Economics. “Economic development, growing wealth, urbanization, education and modernization tend to strengthen the middle class, and such societies exhibit a rising interest in growth and good institutions. They demand accountable government. In such societies, people are not concerned with personal well-being alone; they want a comfortable environment.”

“Any modernization triggers diffusion. In the 2000s, diffusion was observed in the sphere of consumer behavior: mobile phones, the Internet and big retail chains spread to regional capitals. Political modernization proceeds in the same way,” said Natalya Zubarevich.

And according to experts, demands that seem inherently political in reality stem from economic concerns. Qualitative growth is impossible without effective institutions: protection of property, a working judiciary and democratic government.

“Developed democracies have tended to devolve administrative functions to the level of professional civil communities,” said Natalya Smorodinskaya, head of the Poles of Growth and Special Economic Zones Unit at the Economics Institute of the Russian Academy of Sciences. “Today, the state should be lean and the bureaucracy small, because no government can cope with the increased dynamism of the environment single-handed. The ultimate goal is to accelerate formation of regional clusters with their own specializations, which will determine the competitiveness of the region. But successful clusters cannot be created from the top down; they are formed locally.”

The increase in social capital and investment of ordinary Russians in their communities can only help this process.