Where do Indian students meet in Moscow? 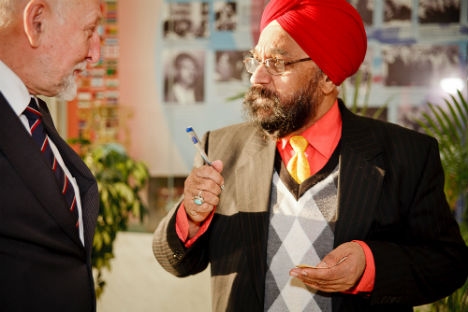 The most international university in Russia gathers its alumni once again

There is a place in Moscow that even a Muscovite would find rather difficult to reach. It is situated close to the last metro station in a spot that always seems crowded and filled with buses and taxis. Waiting in the queue for tickets, you can hear a question asked in Spanish or Swahili. You can answer in French or Chinese – and you will be understood. It is here in the southwest of the capital that people from around the world have been drawn together for 50 years now – it is Peoples’ Friendship University of Russia.

Indian students association always works with the University, the Embassy of India in Moscow and all Indian communities to promote Indian culture in Russia and other countries. Main festivals which are organised by Indian students every year are Durga Puja and Rhythm of Unity. Durga puja is arranged with the help of different Indian local communities for the last 18 years in Moscow, and PFUR has become a symbol of Durga puja as a spot of festival. Rhythm of Unity is organised by the Indian students in May every year to show Indian culture in PFUR. On this day Indian PFUR alumni are invited to share their experience with new generation, as well as on the annual day of PFUR there is an opportunity to share the experience of alumni with newcomers.

Despite freezing weather, students flock near the PFUR (russian RUDN) building, as usual. Some Africans wearing national consumes are obviously waiting for someone. Finally, they see their friends – a motorcade of Mercedes vehicles with national flags drives into the square in front of the university. Men wearing formal suits step out of the cars and it would appear they could not have anything in common with the students. Yet, before walking towards the building, they dive into car boots and suddenly re-emerge wearing colourful costumes. Pearly-white African smiles explain everything – the guests are gathering for a celebration.

In early February, the university marks its anniversary. This year PFUR turned 52, so you can still meet its first alumni. Everyone hurries to the convention hall, where the Rector, Academician Filippov, speaks about the heights the university has reached during this comparatively short term: “PFUR is the leading Russian university in terms of joint master’s programmes with leading universities of the world, which guarantees the high competitiveness of our alumni on the job market.

Delegations of alumni and officials at the 52nd PFUR anniversary

Till now more than 1200 Indian students passed out from RUDN. About 80 % graduates (800 students) obtained a degree in medical faculty, 12 % (250 students) majored in engineering and the rest 8% (200 students) studied in different faculties like public relations, MBA, hotel management and Russian teaching course. At present time the ratio between boys and girls is 10:1. After graduating from PFUR, lots of Indian doctors work in famous hospitals all over India, and abroad. And lots of Indians are well settled in Russia also with high positions.

At the moment there are 53 students from India, nine of them having been accepted this academic year.