GLONASS benefits worth the extra expense 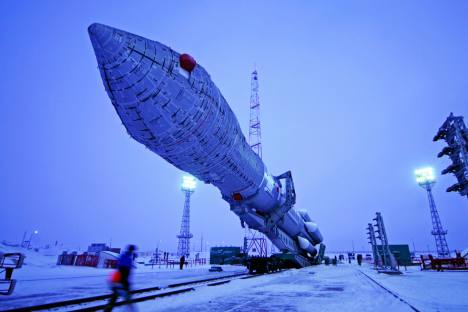 The Russian satellite-based navigational system faces some costly upgrades in the coming years, but its increased capabilities will be worth the additional expenditure.

The failures that plagued the Russian space industry in 2011 have not caused the Russian space agency Roskosmos to abandon its plans for the full deployment of the GLONASS system – a satellite-based navigation system that will serve as an alternative to the U.S. GPS system. The complete GLONASS satellite system is already in place, but in the coming years maintenance and development costs are expected to rise sharply. From 2001 to 2011, implementation of the federal target program for GLONASS development cost 107 billion rubles ($4 billion), but from 2012 to 2020, these costs will soar to 347 billion rubles ($11 billion).

More than 280 billion ($9 billion) of this will be used to upgrade the satellites. There are plans to launch 35 new, modernized GLONASS satellites over the eight-year period. After this, however, the maintenance costs should drop. The modernized satellites are projected to last between five and seven years longer than the older versions.

In addition to the satellite modernization, upgrades are also planned on the ground. Ground-based differential correction stations and three relay satellites on the geostationary orbit will substantially boost its precision. This complex will help improve positioning precision by providing additional information. By 2020, positioning precision should be 0.6 meters or better, compared to 0.7 meters for the GPS system. Sixteen positioning ground stations are under construction in Russia and in the Antarctic at the Russian bases Bellinshausen and Novolazarevskaya. According to plans, new stations will be constructed from Brazil to Indonesia, covering the entire southern hemisphere and giving the Russian system a foothold in the region.

Like GPS, the GLONASS system was originally intended for military application and discussions of its transition to commercial use began only recently. The first real GLONASS-capable civilian devices appeared at the end of 2009, but so far the technology has proven to be commercially viable. In 2011, navigation operator NIS GLONASS reported 3.3 billion rubles ($110 million) in revenues – 4.5 times more than in 2010. The development of projects associated with satellite navigation will only increase revenues, and Alexander Gurko, general director of NIS GLONASS is optimistic about the creation of such projects.

“From this year on, regional target programs for GLONASS development will become additional growth drivers. They have already been approved in 15 regions of the Russian Federation. In another 46, the following projects are under development: equipment of public transport with navigation and telecommunication tools and establishment of systems for remedying the damage done by heavy transport to federal and regional roads,” Gurko said.

Most of the regional programs being developed to take advantage of GLONASS focus on use by the general public, such as improving the punctuality of public transport and controlling the movement of freight vehicles and taxis to modify traffic flow. Other projects will have to wait until the system becomes more precise. Eventually, GLONASS will be suitable for monitoring the state of oscillation-prone capital structures, such as bridges and high-rise buildings. A precise navigation system will be able to detect such oscillations and warn the appropriate control centers in case of dangerous movements. Devices using signals from the satellite system will be installed on the new bridges being built in Vladivostok for the APEC Summit in 2012.

But GLONASS is not transitioning completely to civilian use. In the coming years several projects with military applications will also come online, including the introduction of satellite-guided ammunition into mass production and development of the ESU TZ, a tactical-level C2 system.