The West tries to steal Burma from China 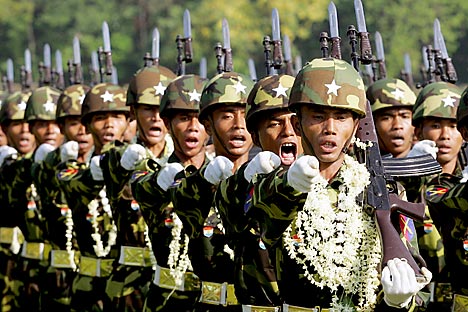 The U.S. and EU are trying to refocus Burma (Myanmar) from China to the "Western values". However, this will not be so easy, Sergei Balmasov ponders.

The West is prepared to lift part of the political and economic sanctions to Burma because of the democratic reforms conducted by its authorities. The experts of the World Bank and International Monetary Fund are preparing to visit the country to provide the Burmese banks 'technical assistance'.

The U.S. and the EU since the late 2011 have been consistently lifting sanctions against Burma, pointing out that this process will occur in proportion to the conducting of democratic reforms by the new Burmese government.

A Mandela Moment In Myanmar

In November of 2010 for the first time in 20 years the country held elections. Then the military junta faced with a sharp deterioration of the socio-economic situation and the pressure from the West, has decided to cede power to a civilian government. However, the generals, in fact, continued to control it because the key administrative positions, including President Thein Sein, were taken by the friends of the leader of junta Than Shwe. However, he also began to implement things that the West demanded from the Burmese leadership, gradually weakening the total control of the former government over the country.

One of the first signs indicating the beginning of the "thaw" was a November visit to the country of the U.S. Secretary of State Hillary Clinton. According to the Burmese media, she became the first U.S. official representative of that rank who visited the country since 1990 military coup. This visit indicated support of the validity of the new cabinet's decision to release the 651st prisoner, and its willingness to "take the path of political reform."

On January 13, 2012 Obama has decided to return an American ambassador to Burma. Former U.S. envoy was recalled from the country in 1990 after the military canceled the results of the parliamentary elections and subjected the victorious leader of the opposition party National League for Democracy (NLD), Aung San Suu Kyi to house arrest.

Now, after she was released and given the freedom of political activity, this "icon of Burmese democracy" is going to take revenge at the pre-election to the parliament scheduled for April 1. Her campaign platform goes under the slogan "make the achievements of modern technology serve young people."

Meanwhile, positive Burmese changes were recognized in the UK that used to have Myanmar as a colony. However, the West points to the fact that its leadership still has much to do in order to prove the sincerity of its intentions. In early February the British Foreign Secretary William Hague came to Burma for the first time since 1955.

He noted that "the world community will judge the sincerity of the Burmese government by its further action." The calculation is based on the fact that the authorities will not interfere with the democratic forces and abandon the secret relations with the DPRK. In particular this applies to the nuclear sphere.

Meanwhile, according to the government of Thailand, Burma wants to participate in multinational annual military exercises "Cobra Gold". According to Japanese media they are aimed at containing China. Obama has given his consent, but his decision was blocked by the U.S. Congress that pointed out that Burma will be ready for this only in a few years. Some U.S. experts believe that it will act as a "Trojan horse" that would make some of the U.S. military secrets known to China.

The changes cannot but cause unrest in China because Burma had been its satellite since late 1980s. The proximity with China and a large stretch of the border (nearly 1,600 kilometers) until now had a strategic significance for Burma. China became even more important for Burma after the West and India have blamed the Burmese authorities for actions against democracy and mass violations of human rights.

Until the end of the 1980s, China had bad relations with Burma because of Beijing's support of the "Chinese expansionism". After 1986, China has significantly limited the support of the rebels operating in Burma in exchange for cooperation with the military junta and increased access to markets. India has expressed concern about the fact that Burma has provided the Chinese military bases on the islands of Coco in the Andaman Sea.

In any case, the relations with China under the sanctions of the West were unable to reverse the situation in the economy. In fact, Burma is struggling with poverty. One-third of its 60 million population lives on less than one dollar a day. The West in exchange for the reforms offers investments that would help to overcome the current crisis. In particular, it promises to invest in the Burmese tourism. It is significant that the Western media has already declared Burma the third top country in terms of attractiveness for tourists.

However, the West is mostly interested in nearly untapped natural resources. The country is attractive in terms of oil, gas, copper, zinc, tin, tungsten, iron ore and other resources. Burma has a particular reputation as a producer of precious stones, especially rubies, 90 percent of which is produced here.

The displacement of the Chinese from the country is one of the major goals in the concept of containment of the growing "Chinese dragon". However, this will not be easy. China has moved into third place as a buyer of Burmese exports and ranks first as an importer of goods to this country (a third of the market).

In addition, China is closely linked with Burma in terms of military-technical cooperation, supplying a wide range of relevant products from fighters to frigates.

In any case, Burma is still heavily dependent on China, and certainly will not be able to get rid of the Chinese goods that flooded its market. For the poor Burmese people they are a blessing that will not be replaced by the more expensive Western products.