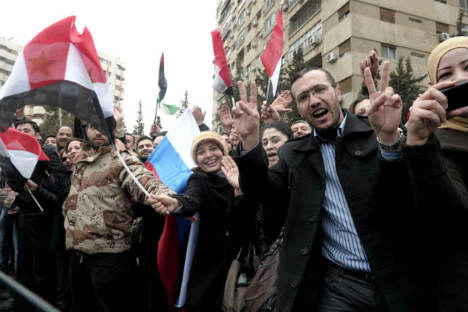 Russia’s Syrian diaspora is as divided on the current conflict in the country as Syria itself.

Moscow is thousands of kilometers away from Homs, but echoes of the heated battles fought by the government troops against the opposition forces in this Syrian city resonate strongly in Russia’s snow-bound capital, where hundreds of natives of this Arab country surf the Internet with anxiety and disbelief for news from their home country. Divisions between some members of the Syrian diaspora in Russia seem to run as deep as in Syria, which edges closer to the brink of civil war every day.

Syria: The Price of Russia’s Support

Some of Russia's Syrians who sympathize with Bashar al-Assad, whose desire to retain power has already cost thousands of lives, sound as official in their support for the government as Syria's Foreign Ministry. “I fully support Russia’s veto at the UN Security Council. Syria needs order, security must be re-established to avoid the same kind of meaningless bloodshed that we saw in Libya,” asserted Musa Aid, the director of the Syrian Cultural Center in St. Petersburg.

Aid came to then-Soviet Russia more than two decades ago to obtain an advanced degree, and eventually stayed. But even though 25 years have already passed since he left Syria, he sounds as fervent in his support for the Assad dynasty as some of the Syrian president's staunchest backers back home. “Al-Assad is the choice of the Syrians and it has to be respected. If there are doubts, then elections must be organized and the outcome of these elections respected. If the Constitution requires changes, we will do so, but we neither need nor want a revolution, we need stability and progress in the region,” he said.

Aid’s defense of Assad and Russia's support for his regime contrast sharply with the opinion of a thirty-something man who had served in the Syrian armed forces for ten years before retiring and moving to Russia to pursue a change of career. Despite having left the military service long ago, the man is blunt and straightforward in his assessment. He asked not to be named out of concerns for reprisals against his relatives in Syria. “Russia’s veto at the UN Security Council is a license to kill for the Assad government,” said the ex-officer, who moved to Moscow five years ago but still keeps in close touch with friends and family in Syria.

The former officer compared the rule of the al-Assads with Joseph Stalin’s terror and predicted its ultimate fall. “It is enough to mention the name of Hafez al-Assad [late president and father of the current president] in the presence of the older generation and you will see panic in their eyes. But when Assad Junior falls, the pyramid of fear upon which he based his regime will fall too,” he said. “Russia says it is using its veto to prevent the Libyan scenario from repeating, but in the meantime the president is killing his own people. We must stop this bloodshed. If the Syrian government will keep killing people and does not accept the dialogue, the rest of the world must help the Syrian opposition and provide them with guns, so we can fight back.”

Opponents of the Assad regime in Russia have launched a Web site “for a free and democratic Syria.” The Russian-language site features news, analysis, blogs and videos meant to rally support for “freedom and democracy” in Syria. However, even though the opposition – the Syrian National Council – called upon the Syrian diaspora abroad to hold rallies to protest against Russia's support for al-Assad, no such protests have been reported by the Syrian embassy in Moscow so far. A request to hold a protest in front of the embassy was rejected by the Moscow authorities on grounds that it would amount to interference with the domestic affairs of a foreign country, Novaya Gazeta reported on February 10.

The former officer admitted that “blood, unfortunately, has to be spilled” to get rid of al-Assad, but predicted that Syria will eventually hold free elections and become a democracy. “Of course, we don’t really have the know-how, so the first two to three years will be violent and turbulent, but it is the only possible way out.” Human rights groups say more than 7,000 have died throughout Syria since violence erupted there more than a year ago. The ex-officer also expressed hope that secretarial and ethnic divisions will end with al-Assad's rule, claiming that “before the Assads came to power, race or ethnicity were irrelevant.”

Assad belongs to the Alawis, a religious group adhering to a branch of Shia Islam centered in Syria. Shias comprise only about 13 percent of Syria's Muslims, while Sunnis account for over 70 percent of the followers of Islam in this Mediterranean country. Overall, Muslims account for 90 percent of Syria’s population, while Christians comprise less than nine percent.

Arabs constitute the majority in Syria. Ethnic minorities include Kurds, Assyrians, Armenians, Turkmens and Circassians. The latter are descendants of natives of the North Caucasus who left their homeland after it was conquered by imperial Russia in the 19th century. Some of them are considering whether to immigrate to Russia. Leaders of the Circassian diaspora in Syria met with officials from Russia's Republic of Adygea to discuss how to expedite and simplify repatriation, Yuga.ru reported.

There are no official figures available on the number of Syrians living in Russia. Officials at the Russian-Syrian Friendship Association in Moscow and the Syrian Cultural Center in St. Petersburg estimate that Syrians in Russia number in the thousands. Many arrived through student exchange programs and stayed. According to the Russian Ministry of Foreign Affairs’ Web site, a total of 35,000 Syrians studied in Russia since Syrian-Russian relations were established in the 1940s. Russia's 2002 census revealed that over 10,000 ethnic Arabs, including Syrian citizens, resided in Russia at that time.

As the fighting continues on the streets of Syrian cities, some in Russia's Syrian diaspora prefer not to take sides in the conflict back home. “Opposition or government? It is all about the money. It is another clash between superpowers,” said a Syrian student at the Moscow-based Peoples' Friendship University of Russia. He asked to remain anonymous for fear of pressure from the Syrian embassy in Moscow.

The former officer doesn’t think that money motivates the opposition, but concurs with the student’s assessment of the power clash in Syria, whose current ruler remains one of Iran's staunchest allies. “It is a second Cold War between great powers, and it's happening at the expense of the Syrian people,” he said.

Russia's reluctance to support the toppling of al-Assad is indeed at least partially rooted in great power considerations. The facility at the Syrian port of Tartus is the Russian military's only surviving naval base outside the former Soviet Union. Established in 1971, this base continues to serve as a springboard for the Russian navy's ventures not only in the Mediterranean, but also in the Gulf of Aden and other far-flung corners.

Syria also buys a great deal of weapons from Russia, which already lost $4 billion in defense contacts after the Libyan regime was toppled, Russia's arms exports monopolist Rosoboronexport estimates. Syria bought $334 million worth of Russian arms in 2009 to 2010, according to the Stockholm International Peace Research Institute. Most recently, al-Assad has agreed to buy $550 million worth of Yak-130 combat trainer aircraft from Russia. Syria imported $1.32 billion worth of goods and services from Russia in 2010, data from the International Monetary Fund shows. The Syrian embassy declined to comment for this article.