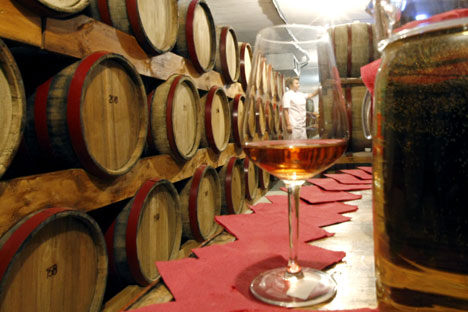 Altai is working to educate its own winegrowers to produce high-quality wine. Source: ITAR-TASS

When Alexander Karlin was appointed governor of the Altai Territory in 2005, he spent alot of time thinking about ways his region might make a name for itself. The area is unique among western Siberian regions because of its temperate climate and topography. With an average of 300 sunny days a year, Altai has more in common with the Black Sea coast than the snow-and-ice-covered permafrost that come to mind with the mention of “Siberia.” Altai has a strong agricultural tradition, and Karlin decided the region could specialize in making cheese.

The success of the cheese project – Altai is now the second-largest cheese producer in Siberia and the home of the world’s largest wheel of cheese – brought the territory into contact with cheesemakers in France’s Franche-Comté region. As the Siberians worked more closely with the French, they learned that in France, where there is cheese, there is wine. And so the idea of making wine in Altai came into being.

It was not the first time the idea had been considered. Altai’s climate is very good for growing fruit, and during the Soviet era, government factories produced alcoholic beverages from chokeberry and apples in the region, although they weren’t very good. During the anti-alcohol campaign begun in the late 1980s under Soviet premier Mikhail Gorbachev, the local winery was an easy target for closure.

Nevertheless, locals had long grown hardy Siberian grapes to make juice and mooshine, so the local authorities knew grapes would grow in the territory. In 2009, 600 vines of classic French grapes such as Merlot and Chardonnay were planted in the territory. The transplants were supplied by the Guillaume family company, which has produced planting stock since 1895. Company director Xavier Guillaume, who is also the president of the winemaking syndicate of Franche-Comté, personally visited Altai to oversee the planting of the vines.

The first Altai winery was small – just 3 hectares. During the first summer, the vines grew very well, but both the Siberians and the French were concerned that the vines would not survive the winter. When the spring returned, it was clear which varietals would be good for the region.

“Pinot Noir and Chardonnay naturalized in Siberia, but white Muscat dies, so we will have to give up on it,” said Vladimir Vagner, head of the AltaiSpirtProm corporation, which supervises Altai winemaking. Vagner noted that the Siberians learned from that first winter how best to winterize the vines. In 2010, the vineyard was expanded to 12,000 transplants, and at the end of that winter, 85 percent of the vines had survived, despite the fact that there was little snow to insulate the plants and the temperatures were very cold.

French specialists warned the Siberians that the vines would bear fruit properly only in the summer of 2012, but the harvest of Fall 2011 proved sufficient to make half a ton of wine. Experts attributed the results to the exceptional fertility of the Altai soil.

“The wine is maturing now; the indicators are very good,” said Viktor Korshunov, head of the Altai District, which is part of the Altai Territory.

Now Altai is working to educate its own winegrowers. Over the last two years, students in the fermentation industry technology department at Altai State Technical University have been trained at the Domain Beau Pere et Fils company and the Agricultural College in Montmorot, France.

The workshops of the old Altai Winery have been reconstructed and new equipment has been procured, including 220-liter barrels brought from Europe in which the wine will mature. Next year, when the grape harvest is expected to reach 30 tons, Altaiskaya loza wine made from French grape varieties will be available for tasting