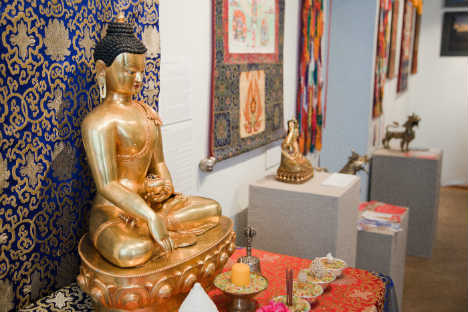 A Buddhist art exhibit arrives in Saint-Petersburg for Days of Tibetan Culture.

Russia’s only travelling exhibition of Buddhist art has returned to the city in a new and bigger format, nearly 10 years after it was first unveiled in St. Petersburg.

This time around, “Treasures of Buddhism,” which has been to nearly 40 cities and been seen by 65,000 museum-goers since it was last on show in the city, is a key event of the Days of Tibetan Culture in St. Petersburg festival, which runs through March 27.

The collection on show includes over 200 items, both ancient and modern, created in the workshops and monasteries of India, Nepal, Tibet and Mongolia, as well as closer to home — in the Russian republics of Buryatia and Kalmykia, where Buddhist culture has been developing for centuries. Visitors to the Books and Graphics Center, where the exhibit is being held, have the chance to study paintings on cloth, or thangka (a linear image of Buddha, a painting made by mineral natural paints preserving proportions and canons), sculptures and ritual objects. The show is accompanied by music and guided tours.

The project aims on the one hand to celebrate the cultural and historical heritage of Buddhism — both on Russian territory and further afield — and on the other hand to present the phenomenon of modern Buddhism. For these purposes, the exhibit is accompanied wherever it goes by a program of meditation classes, thematic lectures and documentary and feature film screenings, which, in light of the growing popularity in contemporary Russia of spiritual practices that have roots in Buddhism, such as yoga and meditation, look set to be very popular.

The “Treasures of Buddhism” project also comprises a photography exhibit titled “Stupa, Wish Fulfilling,” depicting images of stupas (Buddhist places of worship) in the Republic of Kalmykia, Tibet, Nepal, India and Europe. The photography exhibit has been organized to support the construction of the Enlightenment Stupa due to be inaugurated this summer in the village of Mork in Russia’s Republic of Mari El.

“Treasures of Buddhism” was first held in St. Petersburg back in 2003 to celebrate the city’s 300th birthday, before setting off on a journey around the country.

This time around, the exhibit comes just in time to help interested parties prepare for the celebration of the Tibetan New Year with Buddhists on Feb. 22.

Svetlana Belyaeva, supervisor of the exhibition “Treasures of Buddhism”

I have the warmest feelings towards this exhibitions. For 9 years I supervise it I gradually fell in love with it. At the exhibition the art is presented in two parts. The first part presents ancient (150-200 years) thangkas from Buryatia, Kalmykia, Mongolia and Nepal. You can also see sculptural works brought pilgrims from Tibet. The other part is contemporary.

We wanted to present the art that had never served for adorning of home but for meditation. The particularity of the Oriental art is that it’s anonymous, the author doesn’t indicate his authorship. The whole work is done with motivation of helping others. Creation of Buddhas images is motivated by good deeds for others. If the artist gets money it is in the form of the buyer’s gratitude for the work and not for the author’s ambitions. It is important and it is different from the way the Western painters work.

It is very important to note that the works and the images of Buddhas which are created now differ in the materials and colours. But as to the proportions of the symbolism of the pose, the canon was shaped in the 11th century A.D. and it is preserved until now.

The canon hasn’t changed since then. One should give credit to the Buddhist art for not having revolutions. There was no ambitious youth who made changes. But still the artists had room for creativity within the canon. Technique, materials, composition could be different while preserving the main canonic form intact.

There is a preachment on what kind of a person the painter who depicts Buddhas should be. He should be virtuous. He should do no harm, not drink alcohol or smoke, and ideally he should meditate. He has a teacher and asks Lama for advice. Those masters whom I know have devoted their whole life to this art.

Our whole collections is very big. Here in Saint-Petersburg we have chosen the best statues, the ones that are worthy of seeing. There are about 200 exhibits together with the photo exhibition. We were already visited by the representatives of the culture department, of the museum of religion and the Hermitage.

The exhibition is a changing and developing museum in the changing world. We find new exhibits, we buy them and we are even more focused on modern art. It’s very important to preserve modern art. Young people are less interested to take over the knowledge. The skills are kept within a family, and children leave for earnings. Art also gradually decays and our aim is to preserve it.