A little piece of Russia in Mumbai 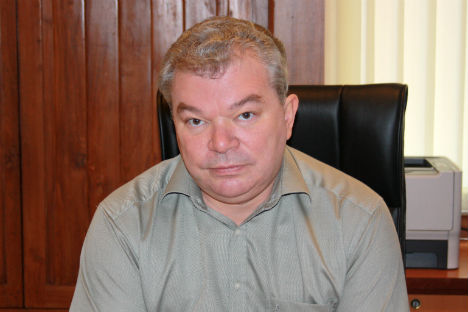 Vladimir Dementiev, director of Russian Centre for Science and Culture

Since 1975, the Russian Centre for Science and Culture has been a landmark in Mumbai, with ballet classes, impressive library and a film club offering free screenings of Russian films. Vladimir Dementiev, director of the centre, is keen on further extending Indo-Russian cultural ties.

It’s Monday evening and in a building that hoists the Russian tricolour, young girls practice ballet to the tunes of Pyotr Tchaikovsky’s Swan Lake, students get a lesson on Russian intonation and pronunciation and office-goers catch up on a Russian film after a long day’s work. These aren’t scenes from Moscow but rather a locality in Mumbai that legendary Indian singer Lata Mangeshkar calls home. Since 1975, the Russian Centre for Science and Culture has been a landmark in Pedder Road, a posh neighbourhood in south Mumbai.

“We already have 118 students enrolled for Russian Ballet classes,” says Vladimir Dementiev, director of the centre, adding that the enthusiastic children performed a special rendition of Swan Lake in Mumbai’s Oberoi Hotel during a function marking the 50th anniversary of the foundation of the state of Maharashtra. Most of the students at the Russian Ballet Studio are under the age of 10, but this has only helped them be more enthusiastic, according to Dementiev.

One of Mumbai’s biggest drawbacks is the scarcity of good public libraries, something that in no way hinders the mushrooming of book stores across the city. The Russian centre’s newly renovated library and reading room are looking to help the book-crazy citizens of the city to go easier on the wallet. “We have over 15,000 titles with books in Russian, English, Hindi and Marathi,” says Dementiev. The wide range of books includes the usual Tolstoy and Dostoyevsky classics but beyond the usual suspects, there are newer titles and unusual publications like white papers on the Chinese Cultural Revolution, rare books on former Soviet states and even a Russian-Malayalam dictionary. The reading room, which is even open to non-members of the library, has periodicals from Russia and computers with access to Russian Government websites.

Another activity at the centre that is popular for Russophiles are the free screenings of Russian films. A film club named after legendary Russian filmmaker Andrei Tarkovsky screens films free of charge on Mondays and Fridays. “I make it a point to at least go for one screening a week,” says Vishal Parekh, an architecture student, who counts Tarkovsky’s ‘Solaris’ as one of his favourite films. “It was only after I saw ‘Peter FM,’ a few years ago that I realised that Russia has changed from the days of the Soviet Union,” says Parekh.

Other myths about Russia get dispelled at the Russian language lessons, which cater to a diverse set of people from students looking to study in Russia to businessmen who transact regularly with Russia. The head of the language department at the centre, Suniti Deshpande was the first Indian to be awarded a doctorate in the Russian language from the prestigious Pushkin State Russian Language Institute in Moscow. Most of the pedagogical activities revolve around the Russian language but there have also been cases of Russians learning English and Hindi at the centre, with Russian being the medium of instruction. “This helps avoid ‘lost in translation’ moments,” says Olga Korablinova, a former Rotary Exchange student who studied at the centre when she lived in Mumbai.

The Russian centre marks important Russian and Indian holidays with cultural programmes, where the main performers are students of Russian or children from the Russian school in Mumbai. Plans are on to mark Women’s Day, which though not a holiday in the city, is growing in popularity among the youth.

The large premises of the centre also contain a theatre with a parquet stage and an exhibition hall that showcases different Russian regions. An exhibition at the centre showcasing the Russian Far Eastern city of Khabarovsk was a major draw in late-November. Photos of the city were compiled by Rossotrudnichestvo, a government agency, which falls under the Russian Foreign Ministry and promotes Russian soft power overseas.

“We look beyond just being a cultural centre that hosts a few events and want to bring Russians and Indians together,” says Vladimir Dementiev, director of the centre. The centre plays host to a club of Russian citizens and Russian speakers from the former Soviet Union. “When the club was formed 2 years ago, we just had 6 members but that number has grown to 30,” says Dementiev, who says that Mumbai and the surrounding areas have a small Russian Diaspora of about 45 people.

Despite close ties between India and Russia, which were at their peak in the 1970s, there are very few places in the city that remind a visitor of this special relationship.  “I was surprised to see that the only small monument dedicated to Russia in Mumbai was a small Leningrad Chowk (square),” says Dementiev. The rather unimpressive square lies in the former industrial heartland of Parel and is hardly noticed by motorists. Dementiev was one of the people who took the initiative to have a bust of Yuri Gagarin erected outside the city’s Nehru Science Centre and Planetarium. “Gagarin was immensely popular in Bombay and when he visited the city in the 1960s, more than a million people turned up on the roads to just get a glimpse of the legendary cosmonaut,” Dementiev says. The bust was unveiled in late-December by Russia’s ambassador to India, Alexander Kadakin.

With the Indian and Russian governments mutually easing visa restrictions, a fresh impetus has been put on the promotion of Russian culture in major Indian cities like Mumbai. The city’s Russian centre is planning a host of cultural and literary events over the span of 2012 in a bid to bring Russia closer to the citizens of this megapolis.