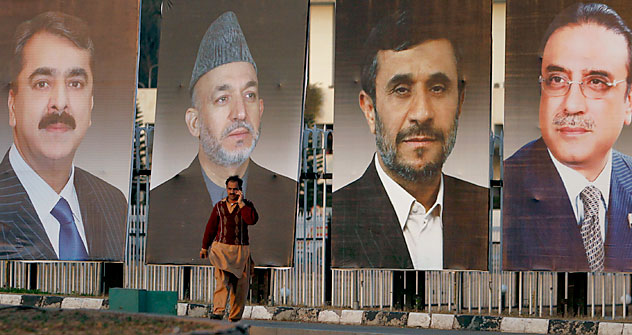 The two-day trilateral summit of Pakistan, Afghanistan and Iran, which concluded in Islamabad on Friday, has exposed the fault lines in the Afghan peace process. In principle, this trilateral forum is all about counter-terrorism and a regional initiative, which has an economic dimension as well.

Much has changed since the last session of the trilateral forum in June 2011. There is recognition today that the Barack Obama administration’s Afghan ‘surge’ at best produced patchy results that are not sustainable and the Afghan forces’ capacity to shoulder the responsibility for security is in doubt. Unsurprisingly, the United States has made a strong pitch for the political track aimed at engaging the Taliban and reaching an understanding over the post-2014 scenario when the combat mission by the western alliance ends.

To be sure, Taliban sense victory. And so does Pakistan. The United States is in hurry to disengage from the war but remains a stakeholder in regional security. The similarity with the Geneva talks in the run-up to the withdrawal of the Soviet forces in Afghanistan is striking. Pakistan is on the lookout for a settlement on its terms failing which it prefers to sit out for the foreign forces to leave (which is inevitable in the very near future) so that it has a freer hand to choreograph the future Afghan power structure.

There are of course dissimilarities, too. Principal amongst them is that Pakistan’s relationship with the US can in no way be compared to its poor equations with the USSR. Pakistan cannot do without the relationship with the US and the Pakistani elites – civilian and military – are not contemplating a strategic defiance of the US. Thus, Pakistan seeks to orientate the Afghan endgame in a direction that not only helps it to realize its national interests but also enables it to rebuild its relationship with the US, given the imperatives of keeping alive its struggle with India, of protecting its nuclear assets and so on, aside extracting as much benefit as possible out of the emergent complex set of regional and global relations.

Pakistan finds itself well-positioned for the Afghan endgame. It has done well to ensure it won’t be isolated or be without options in the post-2014 scenario. Underlying this is an elite compact in Pakistan, but the credit largely goes to the military, which also ensured that repeated US attempts to fragment the compact didn’t succeed.

The trilateral summit last week offered a wonderful opportunity for Pakistan to give ballast to an Afghan-Pakistan peace process that would challenge the US-led, US-owned reconciliation talks with the Taliban in Qatar. In the recent months with Pakistan’s ties with the US under great stress, Islamabad kept inviting Karzai to come on board. However, when the time came, it brusquely turned its face away. Karzai no doubt feels exasperated. The ‘undiplomatic’ Afghan-Pakistan outbursts on the sidelines of the trilateral summit exposed that Pakistan’s priority is to secure a lead role in the Qatar talks rather than spearhead a moth-eaten regional alliance with Karzai. Islamabad doesn’t regard Karzai as an equal partner. He is useful in selective contexts. Karzai tried to reach out to the leaderships of Jamaat-i-Islami and JamiatUlema-i-Islam, who have Taliban links, but that is a non-starter since these Pakistani ‘Islamists’ also enjoy the patronage of the country’s military establishment.

Meanwhile, Pakistan has also begun improvising on the experiences of the late 1990s. It is making contacts with the non-Pashtun groups of the erstwhile Northern Alliance. Pakistan would like a line of communication open to them and such contacts mesh with the cordiality that happily prevails today in Pakistan’s relations with Russia, Iran and the Central Asian states. Indeed, Pakistan would do all that is possible to pre-empt the re-emergence of a unified phalanx of non-Taliban forces in Afghanistan or of any regional powers fuelling an active anti-Taliban resistance. Indeed, Taliban led by Mullah Omar and the Haqqani clan will remain Pakistan’s key ‘strategic assets’.

Therefore, Pakistan tried to fine-tune the trilateral summit in such a way that it retains the free option of a ‘regional initiative’ (in the event of rebuff by the US) while at the same time signaling to Washington that it is keen to do business. On the latter side, Pakistan is dragging its feet with regard to the Iran-Pakistan gas pipeline project. Again, it is showing greater activism in respect of the TAPI [Turkmenistan-Afghanistan-Pakistan-India] pipeline, which is also what Washington wishes.

Equally, Pakistan proposed that the Afghan Transit Trade Agreement (which was negotiated with direct US involvement) be extended to the Central Asian countries. President Asif Zardari carefully avoided using the terminology ‘New Silk Road’, but he underscored that Islamabad remains forever willing to act as a regional trade conduit that connects the land-locked Central Asian states with the global market.

On the other hand, Pakistan also proposed at the trilateral meeting that Pakistan and Iran could conduct their trade through local currencies and barter, which would circumvent the US’s sanctions against Iran; Pakistan is keenly pursuing the 1000 MW electricity transmission line from Iran and the supply of 100 MW of power supply for Gwadar. The two countries also propose to boost their trade to 10 billion dollars.

From the US viewpoint, the most important signal is Pakistan’s preference to work with it in the peace talks at Qatar rather than gang up with Karzai. Dawn newspaper from Karachi summed up: «Mr. Karzai’s… request for Pakistani help indicates a desperate attempt to open up his own links with the [Taliban] group outside of, or at least in addition to, the Qatar process being run by the Americans… But Islamabad offered the usual statements in response, refraining from making any commitments to deliver the Afghan Taliban to the negotiating table».

What is stunning, nonetheless, is the manner in which Pakistan snubbed Karzai. «Deliver Mullah Omar? If that is the expectation, then there’s no reality check then. Then they’re [Kabul government) not only unrealistic, but preposterous… We are willing to look at anything. But if you have unrealistic, almost ridiculous expectations, then you don’t have sort of common ground to begin with», said Pakistani foreign minister Hina Rabbani Khar. The stridency of tone betrayed the self-confidence that Pakistan has played itself into a strong negotiating position vis-à-vis the US and has no real need of Karzai’s partnership. The theatrics bear similarity with the temper tantrums thrown by the Zia-ul-Haq regime from time to time, as Pakistan played for time at the Geneva talks.

Pakistan gets a good opportunity to fathom whether Washington has mellowed when the chief of the Central Command James Mattis visits Islamabad to hold discussions with the army chief Ashfaq Kayani. By the way, US’s Central Command is headquartered in Qatar. If Mattis fails to rise to the occasion, Pakistan always has the option to revert to the ‘regional initiative’. The trilateral forum with Afghanistan and Iran will continue to serve a purpose. And, indeed, Pakistan is also due to host a quadrilateral summit with Russia, Tajikistan and Afghanistan in the coming months before the NATO summit takes place in May in Chicago.

The Afghan-Pakistani discord that erupted on Friday may serve US interests insofar as there is nothing in town now to challenge the Qatar process. But then, this is not a zero-sum game. The US’s interest lies in shepherding Afghanistan, Pakistan and the Taliban onto a single purposive track before the NATO summit is held, where Barack Obama administration will be hard-pressed to keep the US’s European allies engaged in the Hindu Kush. That effort suffers a setback if the Afghan-Pakistan discord exacerbates. Peter Tomsen, who was President Ronald Reagan’s special envoy during the ‘jihad’ of the 1980s recently narrated an analogy based on what the late Abdul Haq, famous Afghan Mujahideen commander once told him in those halcyon days of the ‘jihad’ about the futility of outsiders masterminding intra-Afghan talks.

Tomsen wrote that the US is behaving like an Afghan bazaar merchant trying to balance the weight of frogs on opposite trays of a produce scale. By the time the merchant begins to load the second tray, the frogs on the first tray will inevitably jump off and eventually, «even the most determined merchant will give up.» That is the moment between now and 2014 – when the merchant gives up, finally – that Pakistan seems to be waiting for.

Tomsen underscores, «progress will come only through [US officials] disengaging from direct involvement in the intra-Afghan dialogue, even while encouraging the Afghan sides to reach agreement».

Melkulangara Bhadrakumar is a former career diplomat in the Indian Foreign Service. Devoted much of his 3-decade long career to the Pakistan, Afghanistan and Iran desks in the Ministry of External Affairs and in assignments on the territory of the former Soviet Union.  After leaving the diplomatic service, took to writing and contribute to The Asia Times, The Hindu and Deccan Herald. Lives in New Delhi.