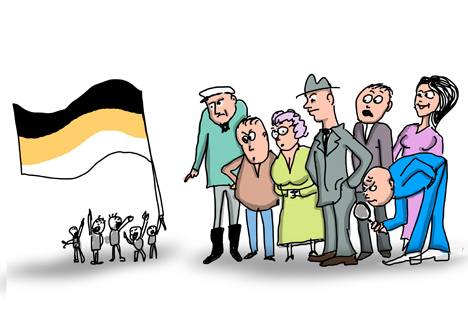 Leokadia Drobizheva is the director of the Center for Study of Interethnic Relations of the Sociology Institute of the Russian Academy of Sciences. She spoke with Sergei Melnikov of Kommersant about nationalism in Russia today. Here some excerpts from her interview

About the shades of nationalism

The notion of “nationalism” has many meanings. An ordinary Russian has always regarded nationalism as a bad attitude towards representatives of other nations and an exaltation of the nation to which the nationalist belongs. In Soviet times, nationalism was interpreted as a wish to isolate and prioritize one’s own nation. Since the 1990s, however, there have been two concepts of nationalism. The first is ethnic nationalism, interpreted as a national policy to achieve the political objective of taking or retaining power. The second tradition is civil nationalism, which is regarded as an aspiration for prosperity of your nation and protection of its interests. When Vladimir Putin calls himself a nationalist [during a recent meeting with political experts, he said: “I am a Russian nationalist, too, and I, too, like the Russian people, don’t wish them ill.”], he is referring to civil nationalism. Previously, Putin spoke about the nation as a community of citizens. In his article “Russia: the National Issue,” he emphasizes the Russian, although he writes that Russia is a multinational country. There are two points here: Putin believes that the Russians are the binding force of the state, which is natural, because the Russians form the majority and the Russian language and culture dominate. Even so, the statement that the Russians are the state-forming nation is ambiguous, because the state is formed by its citizens.

The brighter side of Nationalism

In his article “A Russian Answer to Vladimir Putin,” Dmitry Rogozin attempts to give reasons for the timing of Vladimir Putin’s article and cites two historical examples: the Romanovs, who were trying to enlist the conservatives’ support prior to the 1917 Revolution but were too late; and Joseph Stalin, who appealed to the Russian people in hard times. In other words, Rogozin assumes that the Russians are only remembered when there is a risk of losing power; so the reader might get the idea that the government is somewhat shaky. We, as sociologists, believe that Vladimir Putin’s situation is different and the polls have proved that he does not run these risks. It turns out that Rogozin didn’t do the prime minister any favors. You should not dramatize the national issue.

About the evolution of Russian nationalists

In the mid-2000s, “nationalist” in Russia meant skinheads. They were characterized by clear xenophobic moods, while the movement as a whole must have been controlled by the security services.

At the end of the first decade of the 2000s, “ideologists” became more active alongside extremists, who organized periodical actions. The ideologist category incorporated people of various groups. There is Dmitry Rogozin, who still heads the Congress of Russian Communities and supports Vladimir Putin. Then, there are nationalists connected with left-wing extremists. These include Sergei Baburin, who has long been saying in public that the Russian people have been forsaken. They tend to add habitual remarks about friendship among nations, though. The third group is nationalists with liberal values – Alexei Navalny can be included in this group. Once he said that he was a nationalist, then he called himself a civil nationalist, but his values are always liberal. Finally, there are those who believe that we should have an empire without national republics. Some of these people used to be supporters of the LDPR [Liberal-Democratic Party of Russia].

About the slogan “Russia for the Russians”

According to our sources, this slogan has at times been backed by 58 percent of the population. But then we asked the respondents questions to see how they interpreted the phrase. For instance, when asked whether Russians should have priority for university education and employment, only about 20 percent of the respondents replied in the positive. When we asked about support for the slogan “Russia Only for the Russians,” only 12 percent said they were in favor of this. I assume that this constitutes the maximum electoral base of declared nationalists.

Our institute recently issued a book called “20 Years of Reforms Viewed by the Russians.” The book presents the findings of a mass survey conducted in regions with a predominant Russian population. The respondents were asked about their main concerns. Of the top 20 answers, the leaders were the crisis of the utilities system, low living standards, and deteriorating access to free education. Such concerns as “the increase in the non-Russian population in Russian regions” and “existence of interethnic contradictions” ranked 12th and 14th, respectively, mentioned by less than 20 percent of the respondents. The interests of Russian people thus lie beyond the ethno-national framework, and the same is true for other nationalities.

About the future of nationalism

The politicization of the ethnic theme is obvious, and Russian nationalist trends have been most pronounced recently, along with democratic movements. Yet the nationalists have no single party to unite them; most of their associations are short-lived. Even so, most Russian citizens cannot support the nationalists, because Russians have always taken pride in their ability to live in concord with other nationalities. Even amid the influx of immigrants in the 2000s, the share of people with a negative attitude towards contacts with other nationalities did not exceed 30 percent. Russia can only strengthen its internal bonds by overcoming contradictions through dialogue.

This article is abridged from the original version. You can read the original Russian here: http://www.kommersant.ru/doc-rss/1867141