Singapore: The battle that changed Asia 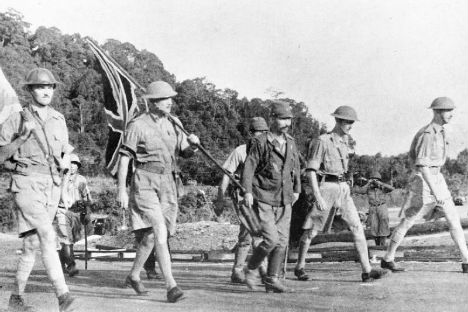 Lt Gen. Arthur Percival, led by a Japanese officer, walks under a flag of truce to negotiate the capitulation of Allied forces in Singapore, on 15 February 1942. It was the largest surrender of British-led forces in history.

We're the Battling Bastards of Bataan,

No Mama, No Papa, No Uncle Sam,

No aunts, no uncles, no cousins, no nieces,

No pills, no planes, no artillery pieces,

And nobody gives a damn!

That World War II limerick about the plight of American soldiers trapped in Bataan in the Philippines would have been a fitting epitaph about British capitulation in Singapore.

On February 15, 1942, Japanese General Tomoyuki Yamashita asked Lt-General Arthur Percival of the British Army in Singapore, “Do you wish to surrender unconditionally?" Without wasting a second, Percival answered: “Yes we do.”

It was a brief exchange but the surrender would prove to be a turning point in the history of the world. The myth of the invincibility of the West was punctured. For the British, the French and the Dutch, the fall of Singapore and the advance of the Japanese across the region destroyed the myth of imperial supremacy. The capitulation of more than 100,000 British empire troops before a Japanese army a fourth of that, triggered forces that ultimately led to the rollback of colonialism from Asia.

Chinese, Indians, Malays and Burmese had front seats to this British tragi-comedy. They were witness to the cowardice and racism of British and Australian troops; and they were shocked by the uninspiring leadership of British officers who were more interested in manicuring their golf courses and munching on cucumber sandwiches rather than digging in for a fight. Coming less than two years after the Germans defeated and trapped a large British force of 338,000 soldiers on the beaches of Dunkirk, the defeat at Singapore exposed the fragile foundations of the British empire.

Britain’s Asian nightmare was a long time coming. Unclassified files from Britain’s Colonial Office show British administration of Asia in an unflattering light. One of the files contains the war diary of Vice-Admiral Geoffrey Layton, acting Commander-in-Chief of Britain’s Eastern Fleet. He wrote: “Man for man, our men were inferior to the Japanese in training and in the moral qualities of audacity, tenacity, discipline and devotion.”

The German Blitzkrieg in France had revealed the sloth and corruption that flourished in the British Army. Discipline was so low that tens of thousands of British soldiers were allowed to pursue their own lazy routines, stealing stores, fuel and even trucks for private profit.

Things didn’t get any better when in August 1941 Britain’s Prime Minister Winston Churchill sent his man Alfred Duff Cooper to Singapore to report on the preparations for the inevitable attack. In a secret letter to Churchill he complained that the governor of the region, Shenton Thomas, had cancelled Cooper’s order that European women and children should be evacuated from the area.

Here’s Thomas’ version of the row: “I stood for no racial discrimination. He (Cooper) said in council that he considered a European ought to get preference over an Asiatic.”

The scenes of exodus from Malaya were nothing less than disgraceful. While British families were evacuated, Asian families were left behind. No arrangements were made for their evacuation.

It was perhaps poetic justice that when the Japanese seized the Penang radio station, which the British had left in excellent working order in their haste, one of the chief anti-British broadcasters was a former Indian civil servant.

As the cries of Banzai drew nearer, the War Office was confident they could deter “the little yellow men” in South-East Asia. The Japanese were portrayed as comical figures who could not see well enough to shoot straight or fly modern aircraft with skill. In fact, some Australian officers in Malaya expressed their disappointment that, if war came, their men would not be meeting more worthy opponents.

On December 8, 1941 Japan called their bluff. Tokyo sent in a well-trained force of 25,000 which established overwhelming air and naval superiority over Malaya and Singapore within a week. Two massive battleships were sunk by air strikes with the loss of over 800 sailors. Among the dead was Admiral Tom Phillips, their naval commander.

N.S. Rajaram, a NASA mathematician and Indologist, remembers talking to Indian soldiers of the British imperial army. In an article for Folks magazine he quotes one of them, now settled in Penang, Malaysia: “When the Japanese attacked, the British ran away. They were very clever. They had a wonderful life with bungalows and butlers and cooks and all that, but as soon as the Japanese came, they ran away. And once they got back to India, they sent Gurkhas, Sikhs, Marathas and other Indians to fight the Japanese. They knew it was too dangerous for them. That is how we got independence in Malaya.”

Rajaram says not one of these Second World War veterans remembers the British fighting the Japanese – only running away.

Lee Kuan Yew, the legendary Prime Minister of Singapore, corroborates that claim. In his memoirs, The Singapore Story, Lee Kuan Yew, describes the Japanese invasion of Malaya and Singapore, which he had experienced as a youngster. “In 70 days of surprises, upsets and stupidities, British colonial society was shattered, and with it all the assumptions of the Englishman's superiority,” writes Lee Kuan Yew.

“The Asiatics were supposed to panic when the firing started, yet they were the stoical ones who took the casualties and died without hysteria. It was the British civilian bosses who ducked under tables when the bombs and shells fell. It was the British civilians and government officers in Penang who, on December 16, 1941, in the quiet of the night, fled the island for the ‘safety’ of Singapore, abandoning the Asiatics to their fate. The British had proved as frightened and at a loss as to what to do as the Asiatics, if not more so.”

Making an example of themselves

Author James Leasor says in Singapore: The Battle that Changed the World that the British treated Asians to an "unprecedented exhibition of their own humiliation and ineptitude".

Never in all imperial history had such a spectacle been staged before nor watched by so vast and attentive an audience. Subject peoples had watched the British destroy their own myth. Now nationalism, which had been either nascent or non-existent, surged to maturity. If one Asiatic power could so humble the greatest imperial power in the world, then other countries suffering under imperial jackboots could rise and fight.

From POW to WOW

The Japanese treated the surrender as a major spectacle. As the British and Australian POWs were marched off, the Japanese guards would tell the locals, “Look at your proud masters now.”

The Australians, who had indulged in rioting and rape of Singapore civilians (the people they were supposed to protect) were treated harshly. Thousands were hauled off in chains like animals to work on Burma rail lines during which beatings and tortures were common; attrition was high.

The 40,000 Indian POWs were another story. Indian freedom fighter Subhas Chandra Bose, who had been frustrated by Mohandas Gandhi’s rejection of violent armed struggle against the British, had decided to strike out on his own. With help from Japan and (grudgingly from Nazi) Germany, he launched the Indian National Army (INA) comprising Indian soldiers captured by both Germany and Japan. Despite being lightly armed and constantly short of stores, the INA nevertheless managed to penetrate into northeast India. But for betrayals by its Muslim soldiers (who feared that the Hindu Bose would replace the British in India) the INA might well have reached the Indian heartland.

Though Bose’s mission was doomed, he accomplished what Gandhi failed to do – he drove a stake of fear into British hearts. The three million Indian soldiers were the sword arm of colonial rule in India; when 40,000 of these soldiers crossed over to the other side, it rattled the empire.

Moreover, the rushed trials and hangings of many INA soldiers vitiated the situation. Indian revolutionaries, whose fervour had been cooled by Gandhi’s appeals for peace, now became active and started assassinating key British leaders. The trials also sowed the seeds of rebellion in the Indian military. Many army units rebelled and were summarily dismissed. Finally, 20,000 naval ratings mutinied in Mumbai. The British panicked – they knew their time was up. Once India was free in 1947, a full decade earlier than expected, the dominoes fell – Burma and Sri Lanka (1948), Malaysia (1957).

Singapore significantly changed the outlook of another nation – Australia. Until 1942, the Australians had been sitting smug under the delusion that they were the easternmost bastion of the West. Singapore busted that myth.

For Australia, it was the start of the process of redefining its relationship with Asia. One reason was that Singapore caused a rift between Australia and Britain. Twenty years ago, on the 50th anniversary of the fall of the fortress, then prime minister Paul Keating provoked a controversy by accusing the British of betraying Australia and allowing a defeat that consigned thousands of Australian POWs to Japanese labour camps.

Not to be outdone, the British quietly released War Office records. The papers contained explosive allegations by the British commander of Allied forces, General Archibald Wavell, that mass desertions by Australian troops had been largely responsible for the Japanese victory. They quoted accusations by senior British officials that members of the Australia’s 8th Division were guilty of looting, rape, drunkenness, insubordination and even murder.

One document said an entire battalion of Australian troops assigned to guard the coast had simply fled, allowing the Japanese to walk through the gap. “The Australians are known as daffodils: beautiful to look at, but yellow all through,” said the document.

During the pre-war decades Australian governments had swallowed the line that Fortress Singapore would provide the cornerstone of Australia's defence – despite the rising threat of Japanese militarism.

The 21st century parallel to that fatally flawed strategy is Australia’s near hysterical reaction to the rise of China and India. It is making another mistake – ignoring the reality of geography and allying with the Americans while treating China and India as future threats.

That strategy could come back to haunt it. In 1941 Britain found itself facing the nightmare scenario of having to fight a war on three fronts – Western Europe, the Mediterranean and the Far East. Net result: with its resources stretched, it abandoned its Anglo cousins in the Pacific.

Today, the Americans say the Asia-Pacific is their priority; tomorrow who knows.