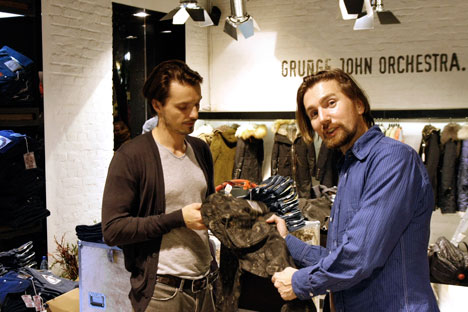 Young Russian designer Igor Isayev graduated from the Saint Martins College of Art and Design in London, but his education continued in internships with the best global brands and training sessions on the latest production techniques in countries as diverse as Italy, Bulgaria and Romania. Now Isayev is a master craftsman who has just opened a flagship store, Grunge John Orchestra. Explosion on Nikitsky Boulevard in central Moscow.

Isayev spoke with Timur Ganeev and Prokhor Kolosov of Russia Beyond the Headlines about the development of Russia’s fashion industry and his creative take on the world.

Russia Beyond the Headlines: The word “grunge” has acquired the status of a brand. What is grunge for you? What was it about this worldview that attracted you?

Igor Isayev: For me, grunge is more a style. It’s a way of thinking based on things that are familiar or close to our hearts. I regard grunge as things with a history, familiar things that sit in the sub-cortex of our consciousness, with a worn out, washed out effect. It doesn’t suit everyone, but so far we haven’t had any problems with demand. I mean, we want to create not so much sub-cultural things, but rather things that look rehashed. We can make things that are completely grunge, worn out and ragged – and we make things that can be worn for a long time, thanks to the quality of the materials, but they look as though they’re already 50, 40 or 30 years old, that’s the idea.

RBTH: You’re trying to create a particular circle of people around the brand, a community. How do you see a typical member of this group?

I.I.: These are people who are stylish in themselves, who don’t depend on what people around them think. In other words, people who are self-sufficient, self-confident and intellectual. We also get young people coming in, but for young people 16 to 18 years old, the first issue is price, and the second is that the fashion within their community is important. They still have some sort of inner complexes. They’ll come anyway, in time.

RBTH: You’ve done a lot of work in Italy, and you’ve made jackets for many brands. What did you get out of this experience?

I.I.: Well, the fact that they have an industry and it works very efficiently, unlike in Russia. I’ve run into big problems here, and I continue to do so. There are more and more of them, because there are fewer and fewer makers, especially good quality ones, the seamstresses are getting old, and the young brands that are currently doing something are mainly doing their own PR, at a very low level.

RBTH: What made you decide to return to Russia and begin from scratch here?

I.I.: Well, in the first place, I didn’t think everything would be so difficult. There is absolutely no industry in Russia. To be honest, I thought everything was available here. If I was going to work here, I’d have to live here. And I thought I’d make a small range for one shop, then for a second, then for a third. But now we’re running into so much difficulty that it’s impossible to start quickly creating a large quantity. That’s because we don’t have the industry here that they have in Italy. In Italy, I could buy everything, and if there was something I couldn’t buy, they’d get it for me – absolutely no problems. But here you have to order everything. Here you can’t make anything of good quality unless you work with European suppliers. Good brands of thread, say, or the right accessories – you can only get them if you order them.

RBTH: You’ve been in the business for more than 15 years. What do you think has changed in that time in the tastes of Muscovites, and what has remained unchanged?

I.I.: In reality, the market in Moscow started to change 10 years ago. Before that there was lots of street retail. But the shopping centers changed everything in a big way. Now the situation is changing again, and in the last two years, street retail is growing rapidly again, especially in Moscow. It’s simply very difficult to get hold of retail space on the ground floor now. Our city is not designed for this; there are no real street-retail streets.

And people used to wear black, that’s the first thing. Then, it was obligatory to be strict like that. People liked to look richer – it was a cashmere coat, or if it was a parka, it had to have expensive fur, and as much leather as possible, trimmings, etc. It was simply everywhere. Then people who travel abroad gradually started to appear. I remember when I was getting on a plane, there were people in mink hats. Now you don’t even see these in Moscow. That was recently, at least for me. So Moscow is now a very European city, on the outside, and even on the inside, essentially. Most people under 30 are European people, and it’s difficult to tell them apart. It used to be immediately obvious who was from Russia. Now, well, perhaps you can tell by the appearance and their tense face. Moscow is definitely changing for the better.

RBTH: What inspires you to create clothing collections?

I.I.: In principle, even an encounter with a pleasant person can be inspiring. But for me nevertheless the main source is music; everything that’s connected with music culture; everything that surrounds it.

RBTH: You grew up in Ivanovo, which is famous for its sewing tradition. Did this influence your decision to get involved in clothing?

I.I.: Absolutely not in any way. I just messed about at school, I was involved in a well-known children’s group, we went to Moscow and appeared on TV on holidays, and I saw different people there. I’d enjoyed music since I was in kindergarten, and when I was 15, western magazines started to appear. They had photos of my favorite groups and we looked at posters, then my brother and I had a group, and we needed something to wear on stage. Everything started gradually from that: We had to make jeans, and shirts with things written on them. So we decorated them, altered them, stuck prints on them and made appliqués from leather so that somehow we could make over our grandfather’s things.

I tried to get into a textile institute, but they threw me out of the exam for looking too garish. I’d thought I should surprise them with fashion. I arrived, and there were girls all wearing little white jackets, black skirts and flesh-colored tights. In the Soviet years, they didn’t want to change anything.

RBTH: In your shop, people can choose materials for one of 15 styles of jacket and have it adjusted for them, the same with denim. Everything is personalized. This way is associated with luxury couture or with small private studios. Aren’t you afraid that you’re trying to do the impossible? How important is this in Moscow?

I.I.: I am afraid. We didn’t expect there’d be such a great demand for this offer. We physically cannot cope with it. The clients want to have everything, and now, but for that you need a big team. We only have 12 people in our team, and that includes the laboratory. We can make jeans shorter and the sleeves on a jacket longer, but for the time being we’ve decided not to do global reworkings.

I do all the sketches myself, I choose all the accessories and do the fittings, and this takes up all my time. The designers are also fully engaged in production. There are no tailors in Moscow, no people with expert training. We have people coming to try out with us who assure us they know how to do everything we ask of them, but in the production process it turns out that they’re making an enormous number of mistakes.

RBTH: Your aim is “to open one small shop in every decent city in the world”. Could you name, say, seven places you’d like to sell clothes?

I.I.: Our clothing is close to Western Europe, so London, Paris, Brussels, Florence. But of course to sell clothing in Japan is our dream. However, despite the high rents in Moscow, we had a huge desire to start in Russia itself. After all, we’re Russians, and we need our country.