BRICS needs a shot in the arm 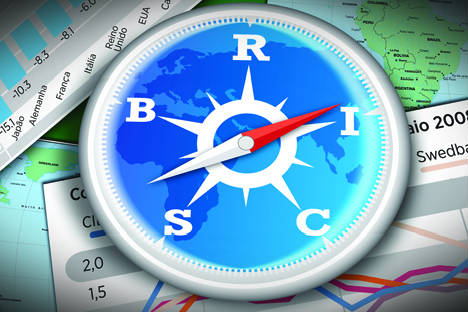 The threat of “contagion” from the slowdown of global economic growth is real for BRICS countries, but analysts do not expect major crises. For Russia, the danger is particularly tangible.

The danger of the negative impact of the falling global growth rate on the BRICS national economies (Brazil, Russia, India, China and the South African Republic) remains fairly high and important. However, the degree of risk varies for different countries, as experts tend to be more optimistic in assessing their own economies than those of other countries.

India, Russia, China are most exposed countries to global risks

Falling, one BRIC at a time

This was the main conclusion of the participants in the Moscow-Delhi video conference “Risks to the BRICS Economies. Is there a cure for the world’s turmoil?” which brought together a number of prominent economists from Russia and India. A World Bank report released in January predicts a general deterioration of the world economy in 2012: a growth slowdown (the IMF predicts a slowdown in global GDP growth to 3.3%), depression in the eurozone, falling oil prices, and a shortage of liquidity on the market against the backdrop of continuing instability in the Middle East. Significantly, the World Bank revised its forecast for developing economies this year downward from 6.2% to 5.4%. BRICS countries will have a particularly hard time because of the threat of financial “contagion” to their national economies from the eurozone crisis through export channels and international capital movement.

Famous multinational investment bank Goldman Sachs predicts that the GDP in four of the BRICS countries will grow by 7.1% (consensus is 7%), while in Russia growth will be the slowest at 3.9% (consensus 3.5%). International experts generally see Russia as the weakest link within BRICS. The country’s vast resource potential is impossible to tap without serious institutional reforms that would provide a solid legal framework for business activities and protect property rights.

This was the message of presentations by Professor Partha Sen of the London School of Economics; Rajesh Chadha, senior economist with the National Council of Applied Economic Research in Delhi; and Chetan Ghate, associate professor at the Indian Statistical Institute in Delhi.

The Indian analysts believe that the global financial crisis and the eurozone situation will not have a serious negative impact on the Indian economy, whereas other emerging countries may suffer.

The Indian economy depends on domestic issues and is based on the internal market, said Rajesh Chadha. “External shocks will not have a substantial impact on the Indian economy, which is oriented more towards China, the UAE and other countries,” he said. China, India and Brazil, in that order, are the drivers of BRICS development. Russian analysts largely agree that the risk of the Russian economy’s “contagion,” as for other BRICS economies, exists but the danger should not be exaggerated. The situation in the eurozone will clear up by the summer of 2012 and will be resolved in two or three years’ time, according to Givi Machavariani, head of the RAS Institute of the World Economy and International Relations’ World Economy Forecasting sector.

His view is fully shared by Professor Yevgeny Avdokushin, director of the Center for Asian Studies in Moscow State University’s Faculty of Economics. He does not expect BRICS economies to be contaminated by the European crisis. But they may be under threat of the banking contagion and the “general creditor effect,” as well as the overall instability of the exchange rates of European currencies and the US dollar. “Nevertheless this year is unlikely to see the ‘effect of the currency trigger,’” he says. Russia is the most vulnerable of the BRICS countries to outside negative influences: “China’s economy is the most stable, followed by those of India, Brazil, and finally, Russia.”

Alexander Apokin, senior expert with the Center for Macroeconomic Analysis and Short-Term Forecasting, recognizes serious differences between the structure of the economies of Russia and other BRICS members. He admits that China is the undisputed driver of growth in the emerging countries. “Given a 13-15% annual growth rate of domestic consumption and the low rate of export growth, the issue of the cheap Yuan will move from the economic to the political sphere,” the expert says. He acknowledges the danger of an adverse impact of the eurozone crisis on the Russian economy. According to the latest statistics, the foreign trade surplus of 17 eurozone countries in December 2011 stood at 9.7 billion euros versus a deficit of 1.7 billion euros in December 2010, and the combined GDP of the eurozone and the European Union dropped by 0.3% in the fourth quarter of 2011.

Nevertheless, Givi Machavariani thinks that because of the specific structure of Russian exports, the risk of financial contagion may not be so significant for the Russian economy. Instead, he is convinced that the problems of the Russian economy must be tackled at the institutional level.

This article was originally published in Russian in Bankir.ru