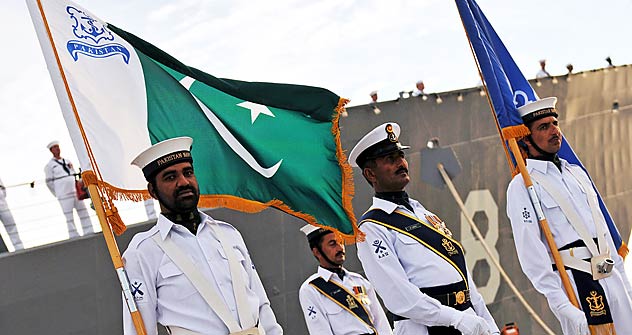 Pakistan is to create its own nuclear submarine fleet, according to media reports. Yet experts doubt the feasibility of this project. But if this decision has, indeed, officially been made, it is a response to Russia leasing the K-152 Nerpa submarine to India.

The buildup of nuclear arsenals by the two countries has become a generally recognised fact, though Islamabad and Delhi honour the pact of non-aggression against each other’s nuclear facilities.

The Asia Defence website and other Internet and print media have reported that the Pakistani authorities have decided to invest in construction of a nuclear submarine fleet. A spokesman for the Pakistani Navy declined to comment on the reports but the project is said to have been approved. The first Pakistani nuclear submarine is expected to enter into service in five to seven years’ time.

Mansoor Ahmed, a nuclear and missile expert at a university in Islamabad, told reporters that the information might have been deliberately spread by the Navy. The leak is supposed to give a sign to India that Pakistan is alarmed by the 10-year lease of the Russian Nerpa nuclear submarine to India.

The Nerpa (renamed INS Chakra) will be operated by an Indian crew, Lenta.ru reports. The Nerpa will become the only nuclear submarine in the Indian Navy and will be based at Visakhapatnam. The boat will be used to train the future crew of the first India-made nuclear submarine. That boat has already been given the name INS Arihant.

It appears that the lease of the Nerpa has spurred on the arms race in South Asia. Yet India, as a growing military and economic power, is developing its nuclear programme bearing in mind a much more powerful potential adversary – China, which is the third side of the nuclear “triangle” in the region.

Nevertheless, it is India that is viewed by Islamabad as an existential threat. This explains the fact that Pakistan, which has been faced with a grave political and economic crisis and has to fight terrorists on the border with Afghanistan, has no plans to economise on enhancing its nuclear potential.

According to the Bulletin of Atomic Scientists, Pakistan has more nuclear warheads than India. As of early last year, Pakistan had from 70 to 90 warheads, though most of them are not ready for operational use. Although both countries are increasing the nuclear containment potential, their “rivalry” cannot be compared with the arms race back during the Cold War between the United States and the Soviet Union. Tatiana Shaumian, head of the Centre for Indian studies under the Institute of Oriental Studies of the Russian Academy of Sciences, has told NG: “if the reports about Pakistan’s plans to build its own nuclear submarine fleet are true, then the two countries will have to spend even more money for military purposes. Is Pakistan capable of investing sufficient resources in its nuclear submarines? I doubt it. Furthermore, we should keep in mind that its nuclear arsenal is being watched closely by the United States. The decision to create nuclear submarines would provoke a negative reaction from Washington and U.S.-Pakistan relations are already very tense.”

At the same time, the severity of the Pakistani-Indian rivalry should not be overdramatised. Delhi and Islamabad are well aware of the danger of confrontation. Back in the late 1980s, they concluded a pact of non-aggression against each other’s nuclear facilities and the two countries are sticking to it, the expert said.

Admiral Igor Kasatonov, former senior deputy commander of the Russian Navy, told NG: “to create a nuclear submarine fleet is an impossible task for a country that has no highly developed industry or high-tech enterprises. Pakistan has no systems for building such a nuclear submarine, unless is gets foreign support. But this is already a political issue.”