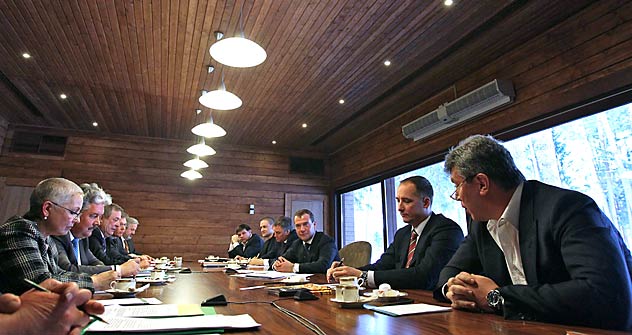 Russian President Dmitry Medvedev has recently met with representatives of non-parliamentary parties. Experts make guesses as to whether he is really ready to compromise with the opposition.

Former Finance Minister Alexei Kudrin did not see any signs of compromise at the meeting between Russian President Dmitry Medvedev and representatives of civil society. “The only result of the President’s meeting with the opposition is that they have finally met. There is no dialogue yet,” Kudrin tweeted.

Medvedev and the opposition

The meeting between the leaders of the opposition and the president took place on Feb. 20. The president began the meeting by saying that the time of change had come for Russia, adding that the current political system was far from ideal and that, in order to change it, “it is advisable to draw upon common ideas.” According to Medvedev, the meeting was aimed at discussing the future of the political system “in the context of the bills that have been submitted to the State Duma,” and the president emphasized that he expected the meeting to “find words of support” for some of the political initiatives he had recently proposed.

For their part, the opposition presented their major concerns, but overall, they seemed to appreciate the chance to meet with the head of state and noted the readiness of the authorities to have dialogue with society. Nevertheless, they were disappointed that their initiative to call a new parliamentary election was not supported by the president.

According to coordinator of the Left Front Sergei Udaltsov, the meeting produced nothing new. “Better a bad peace than a good quarrel,” Udaltsov said. “But it has started too late. The ship has sailed. The presidential election will take place in two weeks. Overall, I have a positive impression about the meeting.”

Another opposition member attending the meeting, the Party of Action’s Konstantin Babkin, believes that the conversation with Medvedev was constructive and sincere. “What seemed positive? The President said he was going to go through with the reform, i.e., complete it before he leaves in May. He is committed to passing all laws on parliamentary elections, registration of parties and elections of governors. We were unhappy, though, that he did not mention the formation of election blocs,” Babkin said.

The opposition also handed over to Medvedev a list of political prisoners and the demands of the participants on the rallies in Bolotnaya Square and Sakharov Avenue. The president promised to consider their opinions and analyze their proposals next week.

Last week, Medvedev met with representatives of Russia’s seven major political parties. Following the meeting, he suggested setting up a working group, led by his First Deputy Chief of Staff Vyacheslav Volodin, to work on amendments to the bill on the political reform submitted to the State Duma. According to Udaltsov, the working group headed by Volodin will also include representatives of the non-systemic opposition. The group is expected to hold its first session on Feb. 22.

The president did not say anything specific, gave no guarantees. There was no breakthrough in the relations with the authorities, but the meeting was useful.

We cannot say that Medvedev met with the real opposition. These are the leaders of parties that will be registered and most of them will be completely loyal to both Medvedev and Putin. We are watching a show.

It is important for Medvedev to make a statement about himself as a liberal moderator consolidating the liberal opposition around himself, whereas the opposition is waiting for something to come its way, say, some future guarantees. The meeting was arranged to appease [the opposition], to prevent hundreds of thousands rallying after the presidential election.

In any case, such a meeting is a positive sign. It should result in some changes. The parties will find it easier to register now, which means their candidates will find it simpler to run in elections. From the point of view of democratization, it is good that opposition came to the president. If they had rejected the invitation, they would have made a big mistake.

Medvedev acts as Putin’s envoy who is responsible for contacts with the opposition. If Putin were meeting with them, he would say the same thing, but he can’t, because he is conducting a campaign that targets the conservative electorate. If he starts flirting with the non-systemic opposition in public, he risks scaring off the traditional voter. I believe he will establish personal contacts with [the opposition] representatives after the election.