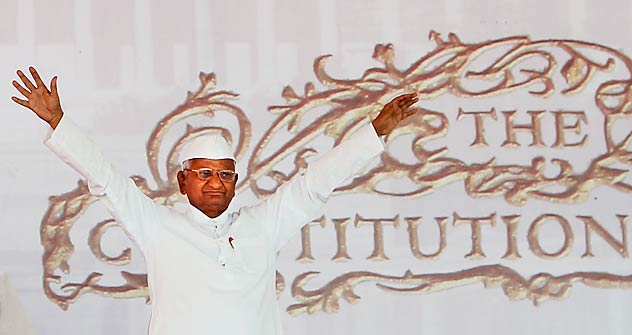 With 2012 under way, it is worth reflecting on how a decade of strong economic growth in emerging markets led to last year's resounding political transformations. From the dramatic events in the Middle East, to the groundswell of support for the anti-corruption crusader Anna Hazare in India, leaders in emerging markets are getting a clear message from the streets that growth is not everything. They ignore this message at their peril.

Emerging-market economies delivered solid growth during the 2000s and even survived the global financial crisis without a growth collapse. But the specter of rising corruption is compromising the legitimacy of their economic gains and eroding support for further reforms needed to sustain their growth momentum.

Corruption takes many forms, but in emerging markets a combination of factors has turned it into a cancer that ultimately topples regimes. Relentless low-level corruption is a major irritant for poor people in many of these countries. Indeed, it limits their access to the social services and basic government functions that they often depend upon for their very survival.

Another type of corruption involves siphoning enormous sums of money from large-scale projects. In India, for example, the government lost as much as $40 billion of much-needed revenue when the coveted band spectrum was sold through a rigged auction.

For ordinary people, large-scale corruption is less visible because, while the sums involved are mind-boggling, the costs are not as directly felt as they are in the case of lower-level graft. But the perception of this type of mega-corruption has changed as rapid growth has increased inequality.

In countries like Russia and India, rapid economic growth has lifted a huge number of people out of poverty. But the fruits of globalization and rapid growth have not been evenly shared. The rich become super-rich, even as a large fraction of the population remains destitute.

Rising income inequality is hardly limited to emerging markets, but their combination of open corruption and pervasive inequities creates a toxic brew that is undermining support for reforms that would strengthen and consolidate their economic gains.

In many emerging markets, a lack of political freedom adds to the combustible mix. The combination of corruption, inequality and political repression builds up enormous pressure, and there are no institutional channels through which to release it.

But freer political regimes are not a panacea. In a democracy like India's, the politically well-connected benefit from skewed growth, thus increasing the resentment of those left behind. The opportunity to "throw the rascals out" in each election cycle helps to let off some steam, but it does not resolve the problems that are generating it.

It is difficult to predict what triggers popular protest, but economic factors are key. For example, rising food prices tend to hurt the poor, especially the urban poor, who spend a large share of their income on food. Unlike agricultural workers, they receive none of the benefits of higher food prices. With swelling urban populations, it will become increasingly difficult to keep a lid on these pressures.

Some governments have reacted to recent events with political repression, information blackouts or a combination of authoritarian measures. China, for example, blocked media coverage of the Egyptian protests. The Arab Spring, however, reveals the fragility of repressive political regimes that try to maintain their legitimacy by limiting information flows.

The main lesson for dynamic emerging market countries is that an exclusive focus on gross-domestic-product growth may ultimately not be good for economic and political stability. Even with rapid increases in national income, if these countries' leaders do not distribute the benefits fairly, they will become vulnerable to popular discontent. Tackling corruption is critical to improving long-term growth and maintaining social stability.

These economies need measures that help to keep the poor out of poverty traps and that give them realistic opportunities to improve their economic well-being. Such steps include broadening financial markets to give more people access to credit and investment, strengthening social safety nets to protect the economically vulnerable and improving educational access and quality.

These lessons apply equally to advanced economies, which also suffer from rising inequality and subtle forms of corruption. But for those wealthy economies, restoring decent growth is now the major priority.

Emerging markets have a golden opportunity to build on their economic gains and lock in growth and stability by tackling deep-seated problems like corruption. As the past year's events have shown, the costs of inaction could be calamitous.

Eswar Prasad is a professor of economics at Cornell University and a senior fellow at the Brookings Institution. He is the author with M. Ayhan Kose of "Emerging Markets: Resilience and Growth Amid Global Turmoil." © Project Syndicate