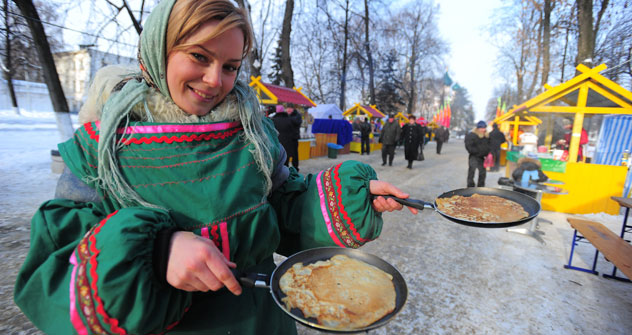 Munich lures millions to drink beer at Oktoberfest, so Moscow reckons it can get the world to crave its bliny at Maslenitsa

The Russian capital is going all-out to turn the pre-Lent pancakemunching party into a major touristattracting event of international renown, like Venice’s Carnivale or Rio’s Mardi Gras. And with the Maslenitsamakeover team boasting Sergei Kapkov in his new capacity as the city’s culture department boss, he might just be able to work his magic in revamping the old-fashioned holiday just as well he did with Gorky Park’s transformation last year.

While the focus of the festivities in previous years has been Vasilyevsky Spusk beside St. Basil’s Cathedral, this year there will be no Maslenitsa celebrations at that location. Instead, the main festivities will be in Gorky Park, from Friday, Feb. 24 to Sunday, Feb. 26. Gorky Park’s larger capacity has been cited as the reason for moving the main festivities there. Bliny and souvenir stalls, art installations, cooking classes, traditional games, a medieval village with craftspeople at work, and performances by rock, ethno and folk groups including Ivan Kupala are all on the program. There is to be a live video link-up with London’s celebrations on Trafalgar Square from 7 pm on Feb. 26, when Gorky Park’s festivities climax with the burning of an 11-meter fire-breathing Zhar- Ptitsa (Firebird) installation.

Moscow’s second major venue for this year’s Maslenitsa is Red Square, which is also linking up with Trafalgar Square via live video transmission on Feb. 26.

Shpilko said the London festivities, taking place this year for the fifth time, are key to the touristluring efforts.

“The London event is important for us, as we need to export or our culture, a positive image of the city and country,” RIA Novosti quoted Shpilko as saying. “Maslenitsa can become a significant and effective event to advertise the capital as a tourist destination. …

“We are trying to make Maslenitsa more modern,” he added.

While Red Square and Gorky Park are marking Maslenitsa for just one and three days respectively, the All-Russia Exhibition Center or VVTs is promising a pancake party all week. Visitors can try eight different types of bliny from historical recipes in the Retro Rink’s cafe, and every evening there will be festivities on the ice. On Feb. 23 a Maslenitsa fair opens in front of pavilions 11 and 12, and the closing party on Feb. 26 includes a ski race, concert, folk dancing and traditional burning of a Maslenitsa figure.

Kapkov told the press conference that there would also be Maslenitsa events in all city parks, from Sokolniki to Kuzminki. Poklonnaya Gora is to host a carnival on Feb. 25, while Kolomenskoye will offer a fair with interactive games for adults and children alike.

Smiling-sun logos – referring to the holiday’s pagan roots as a sun festival – are to shine from hundreds of posters and thousands of banners all over the city, enticing visitors to join the celebrations. Indeed, bliny themselves are supposed to symbolize the sun, representing a good-bye to winter just as much as a last hurrah for believers before the Great Fast, so Maslenitsa is a holiday for all to enjoy.

Feb. 24-26 in Gorky Park, Feb. 26 on Red Square, plus smaller events in parks and squares all over the city; for the full program and all locations see maslenitsa2012.ru