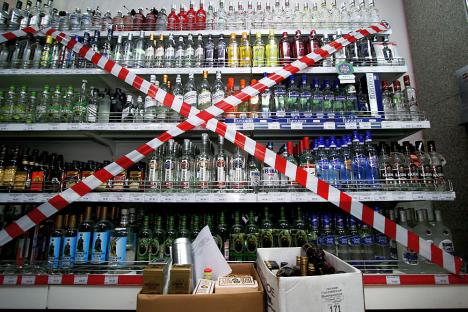 Starting January next year, a new licensing law, also signed by the Russian president, will ban beer sales from 11 p.m. to 8 a.m., except in bars and cafes. Source: RIA Novosti

The unmistakable message from the Kremlin last week is that the government-sponsored “Dealcoholization of the People Program” will kick off as planned after the elections. Authors of the program have predicted “a sea change in alcohol market” that would henceforth make it impossible for Russians to buy wines and vodka at knockdown prices. Industry executives said they are short-changed. And many have been ringing the alarm bell, saying alcoholic beverages could disappear from street stalls and supermarkets come July 1.

About the supreme mission of Vladimir Putin

The modest attendance at this year's Congress of Regional Alcohol Distributors (AlcoCongress), which kicked off in Moscow on Tuesday, underscores the tough challenges now facing the country’s alcoholic drinks market. Many of the country's alcoholic drinks manufacturers could not attend the event because their breweries, wineries or alcohol distillation plants “have been swept away” by industry-wide reforms introduced by the government last year, Moscow's leading tabloid Moskovsky Komsomolets reported last Wednesday. A decree signed by Russian President Dmitry Medvedev in November reclassified beer as an alcoholic drink, making way for it to be regulated in the same way as other spirits. Starting January next year, a new licensing law, also signed by the Russian president, will ban beer sales from 11 p.m. to 8 a.m., except in bars and cafes. The law will also prohibit the sale of beer at street kiosks, as well as drinking it in public places.

Another federal law on alcohol regulation that comes into force in July will reclassify semi-sweet wines, which account for about 80 percent of Russian wine production, as "wine drinks." "For wine producers, that is a real disaster,” said Leonid Popovich, the president of the Russian Union of Wine Growers and Winemakers. "Russia stands to lose 50 percent of its vineyards that are only capable of producing semi-sweet wines. They started off with soft drinks, and now they want to finish off the wine market.” Pyotr Romanishin, the CEO of Fanagoria winery, predicted that the measure could see classic dessert wines like Kagor or “Black Eyes" disappear from the shelves when the new regulations take effect in July.

The Kremlin has made no secret of its intention to use various methods to reduce alcohol consumption, which kills about half a million Russians yearly and lowers life expectancy. While the social circumstances leading to alcoholism in Russia remain beyond comprehension, the general belief is that Russians drink because of poverty and the cold climate. A year after president Medvedev took office the government established a state policy for fighting alcoholism between 2010 and 2012. In many regions, the policy led to a ban on alcohol sales at night, at mass events, near schools and to minors. The government promised to follow up next year with other programs aimed at promoting healthy lifestyles, preventing alcoholism and detecting alcohol-related illnesses early.

A government-commissioned report published in November claimed that adult alcoholism has been on the decline in Russia for the past six years as a result of such government policies. However, the report, which was conducted by the Narcology Research Institute at the Health and Social Development Ministry, also found that the number of teenagers who drink too much has risen during the same period. Between 1999 and 2007, Russia lost 7.7 million people in alcohol-related deaths, including those caused by alcohol-related illnesses and alcohol poisoning. More than 2.5 million Russians, or 1.8 percent of the population, applied for alcoholism treatment in 2010, the latest year for which data is available.

Such disastrous statistics have not only made the growing chorus of protests from industry executives sound hollow, but have also emboldened Russia’s anti-drinking campaigners. Viktor Zvagelsky, deputy chairman of the State Duma Committee on Economic Policy and Entrepreneurship, declared that the government could consider introducing a state monopoly on alcohol production and distribution if the current regulations fail to "contain the situation in the alcohol market." "What you are witnessing is only the first stage in the ‘Dealcoholization of the People Program,’" Zvagelsky said. “In the future, we intend to criminalize illegal production and sale of alcoholic beverages and equate the production of counterfeit excise stamps to third-degree felony."