Who is behind the attempt to kill the Abkhazian president? 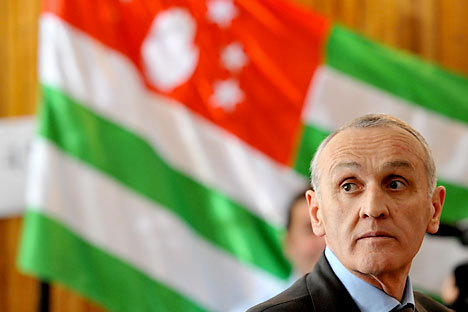 Georgian authorities are blaming the FSB for an attempt to assassinate the president of the Republic of Abkhazia Alexander Ankvab, but the Russian Foreign Ministry asserts the attack is an attempt to destabilize the republic ahead of parliamentary elections.

An assassination attempt has been made on the life of the president of the Republic of Abkhazia, Alexander Ankvab. Ankvab escaped unharmed, but one of his bodyguards died in the attack and two more are seriously injured. According to a news report from the Interfax news agency, the presidential convoy was blown up by a powerful roadside bomb in the Gadaut region of Abkhazia, after which the convoy came under heavy fire from a machine gun and a grenade launcher. The convoy was attacked while the president was on the way to his office.

“I was not hurt,” Ankvab said to journalists by phone. He went on to work, but Abkhazian authorities have started an investigation into the attack. Russian President Dmitry Medvedev offered Russia’s assistance in tracking down those responsible.

“It’s very nice that Alexander Ankvab has remained alive,” said an official from Abkhazia’s opposition Republican Party in an interview with Russian daily Kommersant. The official described the Abkhazian president as a “reasonable politician” and added that it is necessary to collaborate with him to improve the relations between Abkhazia and Georgia.

Georgian authorities and experts have denied all accusations of their involvement in the attempt and have instead suggested that Russia’s security services may be behind the attack. “Alexander Ankvab has always stuck to his principles in defending his positions,” said Tumur Mzhavia, the former chairman of Abkhazia’s Supreme Council in an interview with Kommersant. “[That’s why] he is a not-quite-eligible partner for the Russian leadership.” Mzhavia views the incident as an attempt of the Russian authorities to frighten the Abhkazian leader.

In contrast, the Russian Foreign Ministry views the incident as an attempt to destabilize the situation in the republic before upcoming parliamentary elections. Moscow has been always supported the political course taken by Ankvab, said Alexander Lukashevich, a spokesperson for Russia’s Foreign Ministry. “Any attempts to prevent this [Ankvab's] course will be doomed,” Lukashevich said.

This is the fifth assassination attempt on Ankvab’s life. Including today’s attack, since 2005, his residence and his cars have been hit by rocket-propelled grenades and gunfire five times. He has been wounded on several occasions.

Anvab became the third president of Abkhazia last August, winning election with almost 55 percent of the vote. Before becoming president, he served as prime minister (2005) and vice-president (2009).

Russia recognized Abkhazia’s independence from Georgia in 2008 after the five-day war between Russia and Georgia. Georgia continues to consider the a breakaway republic.

Combined report based on the information from Kommersant Daily and Russia Today.