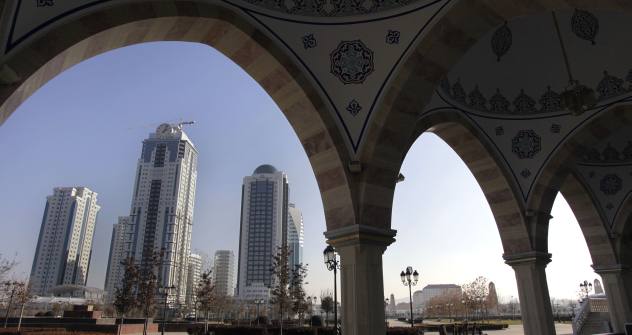 Chechnya is paving its way for the modernization. Source:Diana Markosian

Shattered cement and ghostly streets in the Chechen city of Grozny have been replaced by glitzy shops, soccer stadiums and reduced violence.

When I last visited Chechnya in 1999, the threat of ambushes was rife and the capital, Grozny, was pulverized by shelling. Grozny was earning notoriety as the most destroyed city on earth, and the apartment buildings with facades blown off like dollhouses routinely won a comparison with Dresden in 1945. The bombardment was so massive that the closest we could get to the city was an hour outside. (It didn’t help that our military escort had tipped into a ditch, on a road known for snipers.) Not that the word city applied anymore. Half of the 470,000 residents had fled, and those that remained hid in rancid basements lit by candles. There was no running water for bathing. Shattered cement piled on ghosts of streets.

Chechnya: From the inside. View the gallery. Source: Diana Markosian

So you can imagine my marvel when I returned to the Islamic republic a few months ago and found it unrecognizably thriving. It was a cinch to get to Grozny, which had graduated to the United Nation’s list of fastest growing cities. We drove past villages that were once coiled with razor wire and peopled by fear into a rebuilt town that was so pristine it had a theme park feel. I touched the creamy stone of new shops to confirm they were real. A woman fresh from the gym — the gym! — showed off an Italian bag she had bought for only $200. Then she dashed off to meet someone to discuss whether to get Botox.

I counted at least seven salons on one promenade alone and just as many boutiques selling Prada knockoffs. A huge mosque — Chechens claim it’s the largest in Europe — shimmered with Swarovski crystals and rare marble trucked in from Turkey. Statues of gilt lions guarded a major drag, as glassy skyscrapers caught the rays of sundown.

Two brutal campaigns to quash Islamic separatist uprisings in the 1990s killed anywhere from 63,000 to 370,000. But today’s Grozny sparkles with a luxury hotel, expecting a different type of visitor than invading Russian troops, Indeed, global soccer legends including Argentine Diego Maradona, Portugal’s Luis Figo, and England’s Steve McManaman played at the inauguration of the A.A. Kadryov stadium last year. The $280 million investment, unthinkable during wartime, is being followed by the “Veduchi” ski resort. Costing about double that amount, the resort is due to open in two years in the Itum-Kalin slopes.

Most of the money comes from Moscow, with the logic that bankrolling development is more effective than force to quell restive spirits. The Kremlin’s strategy also includes backing strongman Ramzan Kadyrov, the son of Chechnya’s beloved spiritual leader Akhmad Kadyrov, who was assassinated in 2004.

Russian rubles have poured into Chechen reconstruction. Some government statements indicate $1.5 billion worth, others $21 billion. The city’s sewage, water, electricity and heating systems have been repaired, along with 155 miles of roads, 13 bridges and some 900 shops. This is all the more amazing considering that six years ago most Grozny residents lacked heat or running water.

The mufti, or spiritual leader, explained the thinking that every man who works is unlikely to strap on a suicide vest. “We need to keep the youth busy so they don’t become terrorists,” said Sultan Mirzayev, nodding towards building cranes outside the window. Yet official unemployment at 50 percent leaves room for much discontent.

Much of the construction has arisen under Ramzan Kadryov, and in good dictator fashion, giant portraits of the red-bearded strongman smile across town. (To make clear who is really in charge, though, the central thoroughfare was renamed Putin Prospekt after the Russian premier.) Cult of personality comes with excesses, and Ramzan threw himself a lavish party last October for “Grozny Day” on his birthday that featured international stars Seal and Hilary Swank. Asked where the money came from, he famously told reporters: “Allah gives it to us. I don’t know, it comes from somewhere.”

Making Up for Lost Time

That display, and his private zoo of tigers, lie far from the reality of thousands of Chechens who lack proper housing. Among them is Bela Khadzimoralova, 51, a university administrator who spent much of the war living in a tent just outside Chechnya. She is finally building a new home. “My kids’ dream was of a house with walls,” she said. “We lost many years. Now we need to make up time very fast.”

At least she has somewhere to live in the meantime. Human rights groups report an increasing number of evictions from temporary accommodation of other returnees who lost the rights to their property while seeking refuge outside Chechnya. Many lack documents to prove ownership of homes that were destroyed or occupied by others in their absence.

Most of these unfortunates no longer maintain the “forced migrant” status that gave them the right to city support or housing. They are forced to seek shelter with relatives or leave the city altogether. Russia’s Faustian pact entails ignoring abuses, such as forcing women to wear veils in public buildings and dragging young men from their homes for suspected terrorism.

The men can be shot or disappear, according to human rights activists. To visit Memorial, the leading rights organization, one has to make contact ahead of time and then wade through construction rubble to an unmarked door. There, to the cacophony of drills downstairs, activists ask not to be named, to avoid the fate of their comrade, Natalia Estemirova, who was abducted in 2009, executed and her body dumped in woodlands.

Still, Chechnya has registered a dramatic drop in violence. According to Caucasian Knot, last year there were 20 disappearances and 18 killings compared to 186 and 60 respectively in 2009, the year Russian declared the anti-terrorist campaign officially over and withdrew its troops.

Islamic militancy simmers higher in neighboring Dagestan and Ingushetia. At the many checkpoints along the shared road, photos of suspected terrorists stare grimly from the walls as security forces brusquely search cars. “Out, out,” a policeman in camouflage growled at a carload of young men of fighting age. In our taxi, we discretely adjusted head scarves and assumed neutral gazes in order to be waved on.

On the comfortable commercial flight back to Moscow, I couldn’t ignore the violence, what with a regional security operative sitting behind me who had been shot in the face and was on the way to hospital for treatment. Gripping a bandage over his shattered jaw, the man moaned and groaned as the women around us turned up their iPods and sprayed Chanel to obscure his rotting smell.

Indeed, most Chechens want to forget the war, Zalina Utsaeva, 21, spent much of her childhood quivering in a dark cellar, she said, and she named her daughter, now 4, Zhalenia, which means “Happiness,” to mark the recovery of her city and life as well. Half of her monthly $160 salary goes to kindergarten, and Utsaeva wonders, “Who can afford cafes?”

Yet she has a job, as a nurse, unlike many of her friends who don’t. She floats around the apartment like a little girl dancing the traditional Lezginka, her dark eyes sparkling. Utsaeva’s two room home was toasty with heat and rich with the aroma of meaty soup, unthinkable comforts during wartime.

Bullet holes on the walls of buildings here at the edge of town had been plastered over. “Things are getting better,” she asserts with inspiring resiliency. “During the war and directly after we didn’t have anything to enjoy.”

Judith Matloff is the author of Home Girl and Fragments of a Forgotten War. Matloff teaches at the Columbia Graduate School of Journalism and has won various accolades during her 30-year career. She was Moscow bureau chief for The Christian Science Monitor in the late 1990s.

Chechnya was originally incorporated into the Russian Empire in the late 19th century following a lengthy resistance during several wars of expansion in the Caucasus region. Under the Soviet constitution of 1936, the Chechen-Ingush autonomous region was granted special privileges alongside many ethnic republics that facilitated greater autonomy. In 1944, Joseph Stalin deported Chechens en masse to Kazakhstan over accusations of Nazi collaboration during World War II. Nikita Khrushchev subsequently rehabilitated the victims of the purge in the 1950s.

During the ensuing chaos of the last months of the Soviet Union in 1991, Chechnya declared national sovereignty under the leadership of former air force general Dzhokhar Dudayev. Following an unsuccessful attempt to restore federal control that year, Russian President Boris Yeltsin sent the army into what became known as the First Chechen War in December 1994. Following thousands of civilian and military casualties on both sides and growing public opposition to the War, Yeltsin was forced to negotiate a treaty granting de-facto independence to Chechnya in 1996.

In 1999, after Chechen rebel commanders launched multiple full-scale invasions of a neighboring Russian region, Yeltsin ordered the army back into Chechnya. While large-scale military operations ended in 2000, an insurgency continued into the middle of the decade. A new constitution was adopted in a popular referendum in 2003, and the spiritual leader of Chechnya, Akhmad Kadyrov, was elected Chechnya’s President. Several years after his assassination, his son, Ramzan Kadyrov, was elected President.

Chechnya’s international airport re-opened in 2007, Grozny (once reduced completely to rubble) has largely been rebuilt and President Dmitry Medvedev officially ended the counter-terrorism operation in Chechnya in 2009 (de-facto ending the War). The region is still struggling with high unemployment.