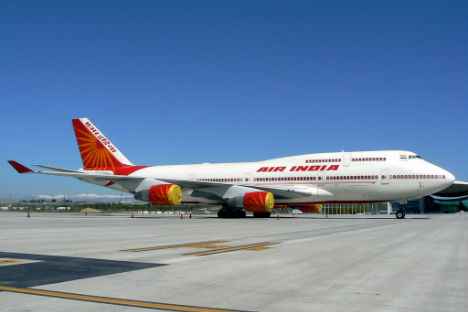 Indian carriers that fly to Europe, including Air India Ltd, Jet Airways (India) Ltd and Kingfisher Airlines Ltd, will have to bear the burden of the proposed levy. Source: en.wikipedia.org

Every state will choose the most effective and reliable measures that will help to cancel or postpone the implementation of the EU Emission Trading System, Valery Okulov, Russia’s deputy transport minister, says.

Participants of the recent Moscow meeting forged a draft envisaging the “basket of counter measures” against the EU move to impose a carbons emissions tax for airlines using EU airspace. Okulov said Saudi Arabia would organise the next meeting of the so-called “coalition of the unwilling” in the summer.

A meeting was held in Moscow on February 21-22 where India, China, the US, Russia and 23 other countries discussed possible reactions to the EU-proposed airline tax. The tax is supposed to be a part of the European programme on curbing the carbon emissions and preventing climate change. It will come into force on 1 January, 2013 under the European Union Emissions Trading Scheme (ETS).

The two-day conference in Moscow was a follow-up to a meeting led by India in September, which was concluded with signing a Delhi Declaration by two dozen governments on the ways of tackling the proposed EU scheme.

Under the ETS, airlines flying to or from Europe must get certificates for carbon dioxide emissions. They will get free credits for most flights this year but must buy or trade for credits to cover the rest. Airlines using EU airspace will have to pay a fee for carbon emissions surpassing an established limit. They will also need to pay for the part of the journey covered by non-EU airspace.

Countries that don’t support the EU initiative prepared a draft, which envisages the “basket of counter measures” including “issuing appropriate state regulation to prohibit national airlines to participate in EU ETS” and “mandating the EU carriers to submit similar flight details to the respective states as required by EU in their scheme.”

They could also consider introducing other counter measures such as imposing additional levies on European carriers using the airspace of non-EU states like Russia, India and China. Existing trade agreements in other fields may be revisited, and current negotiations on trade agreements may be interrupted for the purpose of putting pressure on EU industries.

Indian carriers that fly to Europe, including Air India Ltd, Jet Airways (India) Ltd and Kingfisher Airlines Ltd, will have to bear the burden of the proposed levy.

China has said it will prohibit its airlines from paying the EU fees, and in Washington Congress has voted to exclude U.S. airlines from the emissions cap-and-trade program.

This has led to the debate over the cost of fighting climate change. Some analysts warn it could engender a global trade war.

In Moscow, Valery Okulov, Russia’s deputy transport minister, stated that each country will decide on the measures it would take. “Every state will choose the most effective and reliable measures that will help to cancel or postpone the implementation of the EU ETS,” the Russian minister said. Okulov said Saudi Arabia would organise the next meeting of the so-called “coalition of the unwilling” in the summer.

Connie Hedegaard, the European commissioner for climate action, said the Moscow meeting did not answer Europe’s concerns. She also addressed the nations that don’t like the EU program suggesting that they propose their own ways of cutting carbon emissions, rather than just criticizing the European plan. Hedegaard recommended the countries opposed to the ETS should work with U.N. aviation agency, the International Civil Aviation Organization to achieve a better solution.

EU officials explained their move citing the fact that aviation carbon emissions in Europe had doubled between 1990 and 2006 and governments were not able to forge a global deal on reducing emissions.