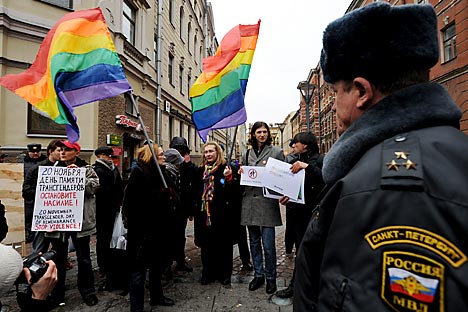 A new proposed bill targeting homosexuals has produced an outcry in the international community, but looks set to pass nevertheless.

The tourist industry of St. Petersburg – Russia’s second-largest city and one of its most popular destinations – may suffer because of a new bill against homosexuals, which local lawmakers are preparing to adopt amid protests.

In an international campaign launched online this week, foreign tourists are urged to inform St. Petersburg Governor Georgy Poltavchenko that they would boycott the city if the local parliament passes a bill against “promoting sodomy, lesbianism, bi-sexuality and transgenderism to minors.”

“If this bill is signed in to law, I will not and cannot travel to St. Petersburg, and will urge all of my friends and acquaintances to follow suit,” reads a petition launched by AllOut.org, a leading LGBT digital direct action organization.

The bill, which does not specify what “promoting” is, can be used arbitrarily to outlaw any public manifestation of homosexuality – from art, film, literature and the media to gay pride events and protests, according to opponents. They also point out that “promoting” activities that are legal cannot be punished, and this is the reason a similar bill was thrown out of the State Duma in 2006.

The St. Petersburg bill has been criticized by the U.S. Department of State, the British Foreign Office, the Council of Europe and the European Parliament, as well as international human rights organizations including Amnesty International. Despite the outcry, the bill passed in a second reading on Feb. 8, when 30 deputies out of the 49 present voted for the law, and opponents fear it will pass in the third and final reading during the next Legislative Assembly session, scheduled for Feb. 29.

In the most recent development, the bill’s author, Vitaly Milonov, chair of the Legislative Assembly’s Legislative Committee and a deputy from the ruling United Russia party, responded to one of the gay activists’ demands by scheduling a hearing on the bill and inviting several of the law’s opponents to attend.

However, the local gay community views the hearing with little optimism. Speaking this week, Igor Kochetkov, the director of the local LGBT rights group Coming Out (Vykhod), said that the hearing was supposed to “show the world that the public was listened to, formally.”

“It might not have any effect on the voting, because the bill passed in a second reading even despite the negative conclusion of the Legal Committee that drew attention to the facts that the bill’s wording was extremely vague and that the terms it used such as ‘sodomy,’ ‘lesbianism’ and ‘transgenderism’ were not defined by the law,” Kochetkov said. “If they don’t want to listen to their own lawyers, it can’t be excluded that they will simply ignore experts’ opinions, but they’ll have a formal excuse that they held a public hearing.”

The lawmakers did add one specification to the bill before the Feb. 8 second reading, clarifying the offense as “the purposeful and uncontrolled public distribution of information capable of being detrimental to people’s health, as well as to the moral and spiritual development of minors, including forming distorted ideas about the social equivalence of traditional and non-traditional marital relationships.”

Kochetkov said the bill – which first emerged during the campaign for the Dec. 4 State Duma elections and reappeared in the midst of the presidential election campaign in early February – was simply a gimmick by the authorities’ to win the hearts of conservative voters.

Milonov did not deny the bill’s political agenda. “"Now everybody can see: Those who are against homos are for United Russia, and those who are for homos are against us," he was quoted as saying by local weekly magazine Gorod-812 in November.

The bill was supported by a number of nationalist and religious groups. Anatoly Artyukh, the local chair of the Orthodox Christian nationalist organization Narodny Sobor (People’s Assembly) described the bill as “just the first step toward reintroduction of criminal penalties for homosexuality in Russia” in an article on the group’s website.

A Soviet law punishing male homosexuality with a prison sentence was repealed in Russia in 1993.

In fighting the bill, gay and human rights activists draw parallels to persecution of gays in Nazi Germany. During a rally near the Legislative Assembly on St. Isaac’s Square on Feb. 8, Kochetkov held a sign reading “Hitler started with laws against gays.” The protest lasted only several minutes before being shut down by the police, who arrested six activists.

Laws similar to the St. Petersburg bill were passed in the Ryazan Oblast in 2006 and in Arkhangelsk in 2011. In November, Valentina Matviyenko, chairwoman of Russia’s Federation Council and a former St. Petersburg governor, proposed that “promoting homosexuality” be outlawed throughout the entire country.