Medvedev and Kudrin escalate their feud 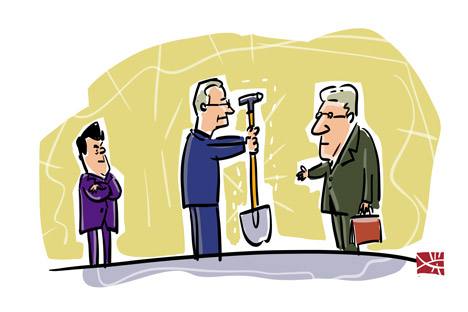 The two men vying for the prime minister’s job have taken their campaign to the next level, sniping at each other in public.

Former Finance Minister Alexei Kudrin and President Dmitry Medvedev seem to be ratcheting up their dialogue by correspondence. A couple of weeks ago, Kudrin, lamenting the failure of Medvedev’s judicial reform, virtually put the blame for the failure on the president. Medvedev, for his part, responded in a less specific way: he recalled Kudrin’s long career in government service and expressed doubt that he was in a position to criticize the authorities. “He is not an opposition politician, but someone who has been kicked out of government for certain reasons,” Medvedev said. Kudrin, however, was undeterred by the presidential rebuke. Shortly after Medvedev’s meeting with some members of the Russian opposition, Kudrin commented: “The only result of the president’s meeting with the opposition is that it has at last taken place. So far there is no dialogue,” Kudrin tweeted on Feb. 21. The ball is now in the president’s court.

Now a third party has joined the dialogue. Igor Yurgens, head of the Institute of Contemporary Development, who had previously been considered an ardent supporter of Medvedev, told Bloomberg that Kudrin and not Medvedev should be appointed prime minister, despite the fact that current Prime Minister Vladimir Putin promised Medvedev the prime minister’s job last September. Yurgens said: “Kudrin could be an ideal prime minister in the transition period because he has the reputation of being a professional and he obviously has the trust of future President Putin.” Dmitry Medvedev is unlikely to “be successful in his job” because he will be “torn to pieces” by Vladimir Putin’s supporters.

This comment amounts to asking Medvedev to renounce claims to the second-most important job in the Russian power hierarchy. And, to add insult to injury, he is called upon to turn the job down in favor of his archenemy. Kudrin and Medvedev are basically jostling for the leadership of “the new right” – those who do not want to support Vladimir Putin, but are not ready to join the radical opposition. The chances of building up political support are better when you are an incumbent, and the prime minister’s post is ideally suited for the purpose. In addition to the obvious opportunities, it confers a formal right to make political moves.

However, that right exists only on paper. In reality, under Vladimir Putin’s previous time as president, all prime ministers were merely functionaries, leaving it to Putin to launch political initiatives and take political steps. There is no reason to think that a Prime Minister Dmitry Medvedev would be allowed more free rein.

That is why Yurgens is calling on Medvedev to step aside and give way to Kudrin, who would then be faced with the task of cutting public spending and breaking through the personnel logjams created by Putin. Then, six years later, when the transition period is over, Medvedev, in Yurgens’ opinion, might have another go at the highest jobs in the land.

Gleb Cherkasov is a political columnist for Kommersant.