Totma: From the Russian North to Russian America 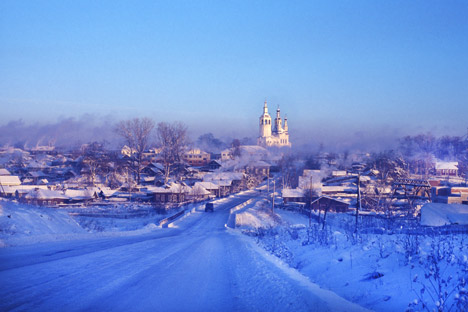 Now a small town off the beaten path, Totma’s unique mix of architecture styles reflects its changing fortunes throughout the 16th, 17th and 18th centuries.

There are many settlements in the Russian north whose architectural monuments reflect an earlier period of economic enterprise and strategic importance, among them Belozersk, Kargopol, Veliky Ustiug and Solvychegodsk. Among these northern towns, Totma must rank as one of the most distinctive. Located on the Sukhona River midway between Vologda and Veliky Ustiug, Totma is today a small town of some 10,000 inhabitants, and yet it contains some of the most dramatic forms of church architecture to be found in Russia. Impressive in all seasons of the year, the towers of Totma’s churches are especially evocative in the winter, when they reach above the plumes of ice haze and smoke from scores of snow-draped wooden houses.

The earliest known mention of Totma is 1137 – 10 years earlier than the first recorded reference to Moscow. Originally located on the Totma River, which flows into the Sukhona some 10 miles downriver to the northeast, the settlement was apparently sacked in 1539 by Tatars from Kazan. The survivors relocated to a more favorable site upriver near the salt springs and mineral deposits that later formed a major source of the region's wealth.

By the middle of the 16th century, Totma had become a center of salt refining, developed by certain monasteries in the Vologda region. In return for their efforts in producing that essential commodity, the monasteries received tax exemptions. The Savior-Prilutsky Monastery near Vologda sent one of its monks, Feodosy Sumorin, to supervise salt production in Totma and in 1554, he founded a monastery dedicated to the Transfiguration of the Savior on the small Pesya Denga River.

The Savior-Sumorin Monastery soon became one of the north’s wealthiest Orthodox institutions, even though it consisted of log structures until the end of the 18th century. In the early 19th century, the monastery began a magnificent building campaign whose results impress even in their current semi-abandoned state. A modest hostel located in one of the former monastery cloisters allows travelers to rest in a bucolic setting.

The other major force in the development of Totma's lucrative salt works was a Stroganov family branch headed by Afanasy and his son Grigory. As elsewhere in the north, the Stroganovs gained a near-monopoly on salt production by ruthlessly undercutting any possible competition (with the exception of the protected monasteries), and by rendering valuable services to the tsar in Moscow. Indeed, Tsars Ivan IV (the Terrible) and Peter I (the Great) visited Totma numerous times—a sign of its economic and strategic significance in the northern territories.

Salt was not the only source of wealth for the Totma region. Fur-producing animals also played a significant role. The importance of the fur trade to the local economy is indicated on the town’s official seal, which displays a black fox on a gold background. As trade with England and Holland developed through Arkhangelsk on the White Sea, Totma became a major river port and trading center. Its extensive warehouses also served the growing trade with Siberia through river networks pioneered by the Stroganovs.

With the founding of St. Petersburg in 1703, Peter changed the direction of trade between Russia and the West. Nonetheless, northern towns retained their commercial importance. During the 18th century, certain local merchants such as the Panovs showed vigorous enterprise in exploring distant territories, and by the end of the century, a number of expeditions to Alaska were funded in Totma. Moreover, a Totma resident named Ivan Kuskov founded California's Fort Ross in 1812 and served as its first commandant.  His grave is now carefully maintained at the Savior-Sumorin Monastery, and his modest log house has been preserved as part of the excellent Totma Regional History Museum.

The wealth that flowed into this community during the 18th century supported the building of a number of brick churches of striking design, with large bell towers and baroque decoration in a distinctive “cartouche” pattern formed in brick. These churches, and the nearby Savior-Sumorin Monastery, were designed to present an imposing view to the river, rising as they did above the wooden settlements around them.

The most imposing of the monuments, the Church of the Entry into Jerusalem, was erected in 1774-1794 with funds provided by the brothers Grigorii and Peter Panov, merchants who were involved in the trade with "Russian America." This church follows the northern practice of “stacking” two places of worship, the lower of which was used in winter, and the upper in the summer. A number of Totma’s 18th-century churches had long gestation periods: first the lower church was built, then the upper part as further funds appeared. In an ingenious approach, the walls of the lower structure were properly calculated to support the hoped-for addition years ahead.

Less imposing but no less striking is the soaring tower form of the Church of the Nativity of Christ, whose lower space was built in 1746-1748, with the upper church added in 1786-1793. Although most of these architectural monuments have survived, Totma’s churches were thoroughly desecrated during the Soviet period. Almost nothing remains of their once-splendid baroque interiors. Three of them are being restored (two for the parish and one for the local museum), but the glorious craftsmanship that once decorated these spaces is visible only in archival photographs.

As in other northern Russian towns, the preservation of log houses in Totma has often yielded to the construction of monotonous brick apartments. Fires have also taken their toll. Yet Totma is better preserved than most northern towns, partly because of 19th-century economic stagnation compounded by the lack of a rail link. With an economy based primarily on farming, the small town retained its harmonious relation to the surrounding landscape.

Tourism is only gradually becoming an economic factor, but the regional administration is committed to improving the situation through town improvements and events such as the observance of the Fort Ross bicentennial this year. The nearby construction of a major pipeline also provides economic support. Through concerted effort Totma can preserve the legacy of the town’s commercial verve and ingenuity, when its free citizens spanned continents from the European north through Siberia to the American west.