Winning over the Russian regions 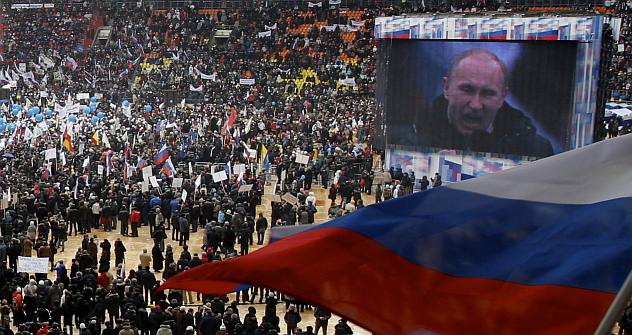 Russian Prime Minister Vladimir Putin is seen on a giant screen addressing a massive rally in his support at the Luzhniki stadium in Moscow, Russia, Thursday, Feb. 23, 2012. Tens of thousands of people marched along the Moscow River and then packed a

Putin rally draws supporters from afar, reminding that Russia is not only Moscow.

Thursday afternoon saw the largest pro-Putin rally yet this protest season, the latest in a series of rival demonstrations that have gripped the country since the parliamentary elections last December. But as thousands descended upon a Moscow arena, the nature of the crowd reminded many that while Prime Minister Vladimir Putin has lost the trust of the urban intelligentsia, his support base in far-flung ethnic regions – and among the typically loyalist class of bureaucrats and civil servants – remains largely intact.

As the masses flocked to the Luzhniki Stadium outside central Moscow – their number, once gathered inside, was estimated at around 100,000 – the atmosphere was festive. The area around the arena boasted food stands hawking grilled meat, baked goods and, in honor of the annual Maslenitsa festival week, pancakes. The occasion was also marked by the celebration of the Day of Defenders of the Motherland, a national holiday that heralds the contributions made by generations of Russian and Soviet men to national security.

From center stage inside the stadium, meanwhile, Putin – in somewhat of a surprise appearance – employed his usual Cold War rhetoric to rally the crowd in hopes of securing a first-round election victory on March 4. “We will not allow anyone to impose their will on us. We will continue to win,” he shouted, eliciting roars of cheering and applause. “The battle for Russia continues – victory will be ours.”

And the “Russianness” of the event was readily apparent. Outside, performance groups in traditional Russian costumes entertained passersby with folk songs, while members of the Central Cossack Host, adorned with handlebar moustaches and dressed in their own traditional uniforms, wandered by as recordings of traditional Russian (and some Soviet) songs blared from the stadium’s loudspeakers.

But many of the participants betrayed the ostensibly national character of the rally. Mixed in with the sea of Russian flags and other patriotic symbols were flags from faraway ethnic regions, suggesting that Putin’s support base, while quickly eroding in Moscow and other urban centers, is alive and well elsewhere. Among the ethno-national hodgepodge were representatives from Siberian regions and Caucasian republics – perhaps in curious conflict with the young Russians touting old imperial flags and the Cossacks meandering about in their tunics.

Forty-one-year-old Vasily Guliayev said he traveled with his co-workers from the remote Siberian region of Yakutia, in far eastern Russia, especially for the rally. A schoolteacher, he noted that Putin should be credited with pulling Russia – and especially its regions – out of tough times. “We’ve been watching on television all of this nonsense brewing in Moscow, and so I came here to show that Moscow is not all of Russia and that there are still many regions that support Putin,” he said. “I remember when I started working more than ten years ago what kind of a mess there was in our country – Muscovites have quickly forgotten that, because they’ve always lived well. Let them come and see what kind of change other regions have gone through.”

But some participants’ apparent commitment to the cause stands in stark contrast to the multitude of media reports in recent weeks, especially on the heels of the previous pro-Putin rally on February 4, claiming that many had been either forced to attend such rallies or had been heavily incentivized to go. From travel stipends and free vodka to open coercion from superiors, a variety of methods were reportedly employed to feign a strong showing for the embattled Putin regime.

Nevertheless, rally participants insisted they traveled to Moscow on their own initiative – and on their own dime. Forty-year-old Yusup Zurabov, a local parliamentarian from Ingushetia, said he paid his own way, along with four other colleagues, from the Ingush capital of Magas. “I came here today because as a father of ten, I have a responsibility to answer for their future. And as our father, future President Vladimir Vladimirovich Putin has his own responsibility for our future,” he said. “We came here by our own means – not because of one thing or another, or to collect a certain amount of dividends. We came to devote our soul and our voice so that this man will continue to lead our country.”

What’s more, many seemed to belong to the classes that have long been the most devout Putin loyalists: civil servants, public employees and low-level bureaucrats. Traversing in packs throughout the crowd, their symbols were openly visible – from the Union of Machine Builders and the Union of Educators of Moscow to Ingush parliamentarians and Siberian public workers, each waved their flags, sometimes unenthusiastically, as curious onlookers passed by.

Thirty-three-year-old Nikolai stood huddled and shivering amidst a gaggle of hooded friends representing a local trade union for construction workers. From Bryansk, a steel and manufacturing hub about 250 miles southeast of Moscow, he offered a simple answer for why he came to central Moscow: “I don’t know – I’m voting for Putin. I think he’s just better than the others.”