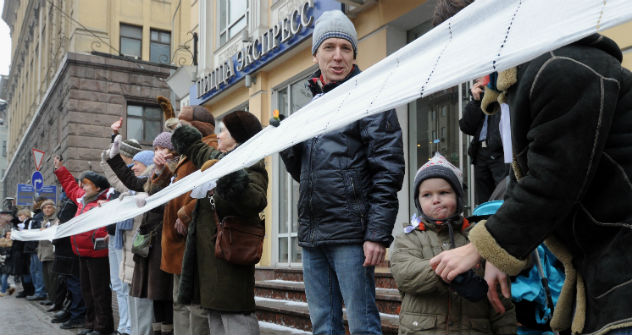 Russian opposition activists attempted Sunday to make a ring, holding hands in a circle around downtown Moscow in a flashmob protest to press for their demands for fair presidential elections on March 4, which Prime Minister Vladimir Putin is set to win.

Participants managed to lock the human chain around the 15.4-kilometer (9.5 miles) Garden Ring road that encircles central Moscow, said leftist leader Segrei Udaltsov, who traveled the length of the ring in a car.

Police said 11,000 opposition activists took part in the flashmob while the organizers put the figure at 40,000. The chain was broken along the road intersections so as not to block car traffic.

The flashmob was the latest in a series of protest rallies that followed parliamentary elections won by Putin’s United Russia party in early December which critics say were marred by fraud. The demonstrations have been the largest anti-government protests seen in Moscow since the early 1990s.

“I’m fed up with the authorities treating the people without respect,” said protester Nikolai Simonov, 26, a financial consultant.

“They need to develop a conscience,” said Simonov, who, like many others, sported a white ribbon with the words, “For fair elections.” “I expect something to change, I want no more impunity for the authorities,” he said.

The organizers of Sunday’s grassroots protest have said that they chose this kind of a demonstration because it does not require permission from the Moscow City Hall. Hundreds of police were deployed downtown, but did not intervene.

The event’s website, 26feb.ru, said that 34,000 people would be needed to “lock” the human chain along the Garden Ring. Meanwhile, only 14,000 people confirmed their participation in the flash mob on the group’s Facebook page, a far smaller number than for previous opposition demonstrations which mobilized tens of thousands of people.

“I saw no holes in the chain, we have about two people per one meter of distance,” said journalist Sergei Parkhomenko of the League of Voters grassroots group that endorsed the flashmob. However, the chain thinned out considerably between the Oktyabrskaya and Park Kultury metro stations, though protesters crowded near the metro exits.

Opposition leaders Alexei Navalny, Vladimir Ryzhkov, Boris Nemtsov and Ilya Yashin, as well as politically conscious TV hosts Tatiana Lazareva and Ksenia Sobchak, were also in the human chain. Presidential candidate Gennady Zyuganov and former Finance Minister and Putin’s friend Alexei Kudrin endorsed the flashmob, but did not attend, while Zyganov’s rival Vladimir Zhirinovsky strolled along the human chain, but did not join.

A motorized opposition rally, the third of its kind this year, took place on the Garden Ring at the same time as the flashmob, the drivers slowing down and honking their car horns to loud cheers from the human chain.

In a first, anti-opposition activists turned out at the protest event, dozens of them crowding around the Park Kultury metro, where many media outlet offices are located, including RIA Novosti, with posters “Putin loves everyone” and chants of “Putin and Victory!”

Counter-chants of “Putin go away!” were heard, and verbal spats between opposition activists and Putin’s supporters, who numbered many sturdy young men and excited teenage girls, flashed in some places, but no outright clashes took place.

Most protesters interviewed by RIA Novosti said the reasons why they were out in the streets were moral as much as political. Many say the authorities are corrupt and that they disregard the general population.

“Nothing is changing. I’m tired,” said pensioner Lyubov Troshenskaya, 56, who cited Putin’s decision to return to the Kremlin as a major turning point for her. Putin and President Dmitry Medvedev announced in September that they would swap places after the elections, which disappointed many supporters of Medvedev, who was endorsed by Putin, but proposed a sweeping, though mostly unrealized, reformist agenda.

“We want the authorities to realize that they’re acting wrongly. They need to stop the hypocrisy, the lies, the corruption,” said Alexei Glubokov, 24, a marketing consultant.

Meanwhile, Putin’s supporters insisted he is the only person fit for the top Kremlin job in the country. “Putin has already brought Russia up from its knees, but can lift it up further,” said Alexander Gubarev, 23, an agriculture engineer. He refused to give his name at first but caved in after learning that his opponents did not mind disclosing personal details to reporters.

All Putin supporters insisted they were grassroots activists not affiliated with any organization. Events by pro-Putin groups in the past have seen many provincial residents participate, attracted by promises of a free trip to the capital and, allegedly, small monetary bonuses.

Some 130,000, mostly state employees, rallied in support of Putin on February 23 in Moscow. Opposition insisted that many participants were forced or paid to attend, though organizers said the majority came voluntarily.

A follow-up flashmob took place on Moscow’s Ploshchad Revolutsii next to the Kremlin on Sunday, where hundreds of protesters chanted anti-Putin slogans and released white balloons into the air before dispersing. Police said it detained 10 protesters for trying to start a fight with members of unspecified other political groups also present at the venue.

Small-scale opposition events also took place across the country, including in St. Petersburg, where 2,500 attended, according to police. Organizers said the turnout was several times higher. The St. Petersburg event was attended by Sergei Mironov, a presidential candidate with A Just Russia.

Turnout at the Moscow flashmob was smaller than at previous opposition rallies this winter, each of which gathered upward of 60,000, by organizers’ estimates, and more than 30,000, according to police.

This has prompted two lawmakers with Putin’s United Russia, Vladimir Burmatov and Ruslan Gattarov, to say on the party’s website that the protest movement is “fizzling out.”

But analyst Alexei Makarkin of the Center for Political Technologies said it is normal for a flashmob to attract less than a proper political rally.

“The important thing for the opposition was to keep up people’s spirits” ahead of a new round of protests set for after the presidential elections next Sunday, Makarkin, said by telephone.