“Eat a pancake - Save a child” 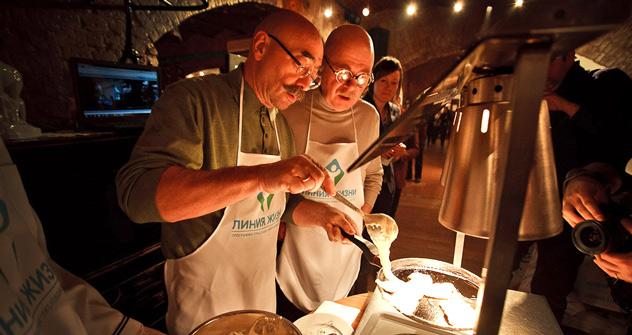 Maslenitsa, an old Russian tradition, originated in the pagan times, but this massive festival of consumption is now taking on a more charitable aspect. A local charity has found a way to raise money for sick children by eating pancakes.

Every year around the last week of February, Russia is overcome by a huge, nationwide holiday called Maslenitsa. Even foreigners who have spent at least one year in Russia are quite familiar with its simple rules of the event. The point is simply to cook and eat pancakes – alone, but mostly filled with cheese, ham, caviar or various other sweet and savory items.

This year, the charity organization “Liniya zhizni” (The Line of Life”) which raises money for children who need expensive heart surgery, held a series of activities under the tagline: “Eat a pancake – save a child.” The aim of the program was to help one particular child – nine-year-old Lisa Bragina from Sterlitamak in the Republic of Bashkortostan, who is in need of an operation to repair a serious cardiac defect. The cost of the operation itself will be covered by the state budget, but an additional 195,028 rubles ($6,600) are needed for the purchase of some necessary medical equipment for the procedure, said Faina Zakharova, the president of the fund. The charity raised money not only through selling pancakes – an ice-skating event, a drumming show and other performances also supported the fund. Additionally, restaurants in major Russian cities donated a portion of pancake sales to the cause. The chefs in the partner restaurants created special pancake menus for the event.

In Moscow’s Petrovich club, which is a popular hangout for intellectuals, artist, writer and satirist Andrei Blizho hosted a charity event on Feb. 23. The central hall of the club was turned into a kitchen with a stove in the middle of the scene surrounded by a three-piece orchestra playing retro Soviet hits. The plan was to cook olad’i – traditional thick Russian thick pancakes from the recipe of some legendary person named Baba Valya, who was quite famous among locals for her outstanding pastries, at least according to Zhanna, one of the organizers of the event. Trying to be creative, Bilzho made his pancakes very thick, so it was difficult to turn them over on the pan. The pancake cooking show was supplemented by the sale of lottery tickets at the price of 500 rubles each. As Bilzho said: “10 tickets – is 5,000 rubles, 100 tickets is 50,000 rubles, while the surgery operation for the kid costs $6,000. Help the kid and she, probably, will become an artist, an architect, a sportsman or someone else in the future, while you will be able to show this lottery ticket with pride to your children and grandchildren.” After this inspiring speech, the remaining 50 lottery tickets were sold immediately. At the end of the evening, the lottery winners received bags of unexpected contents: some discovered a bottle of sunflower oil, others – a bag of milk or wheat, while the rest could find a pack of sugar. “This is not a coincidence,” said Bilzho, while the winners stared at their prizes in confusion. “If you combine these ingredients, you can make an enormous pancake and feed each other!”

The “Eat a pancake – save a child” program was announced on Feb. 20, when the restaurants officially began the sale of charity pancakes. The event ended with the official close of Maslenitsa at the ice rink on Petrovka Street in Moscow. At the final event, Miss Russia 2011 Natalia Gantimurova was in charge of the stove, where she displayed her culinary abilities. Traditional Russian games like tug-of-war and round dance attracted crowds of Muscovites, and the event culminated with the arrival of a symbolic Maslenitsa scarecrow, as proscribed by the pagan tradition.

‘Our main mission is to develop the tradition of charity in Russia,” said Zakharova. “Donating money became a way of living in the West very long ago. And people learn to donate since childhood regardless of the scale of a family budget. In order to promote charity in Russia, we are always implementing various forms of creativity and game-like activities and we see that it works. Our dream is to turn it into a lifestyle, when every Russian family donates money to those in need.’