Putin and Russia’s yearning for change 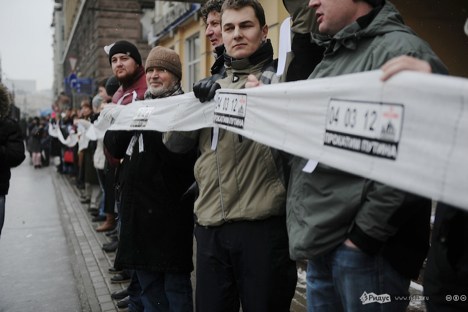 Russian opposition activists attempted Sunday to make a ring, holding hands in a circle around downtown Moscow in a flashmob protest to press for their demands for fair presidential elections on March 4, which Prime Minister Vladimir Putin is set to

Predicting the outcome of democratic elections is fraught with risks. In the last election to the Duma, the Russian electorate sprang a surprise by denying the ruling party a “brute” majority, but nonetheless voted it in. The popular mood has changed while at the same time Russian electorate sought political stability. The rejection of the liberal camp and the rise in the popularity of the Left contained its own political message.

Many hastily interpreted the ensuing mass demonstrations in December as a call of the Russian nation for “fair” elections. But in the event, a far more complex matrix is visible. The last Duma election was the most open election held in Russia’s current history and it happened because of the “regime” and not in spite of the “regime”. That is to say, the need for reform and change is recognized by the “regime” and the issue is about overcoming the inertia to change and about setting the pace and direction of change.

The manifesto of the leading presidential candidate Vladimir Putin underscores that changes can be expected if he gets elected. Meanwhile, the “regime” did exceedingly well by allowing the demonstrations to be held noisily so that protests could be heard and seen all over Russia and abroad. In retrospect, if ever Russia faced a threat of “color revolution”, it has dissipated. That transition and change can take place within legal and constitutional parameters seems to be widely understood.

In turn, all this has given huge traction to Putin’s own candidacy. The rising graph in his popular appeal has reached a level that makes a run-off improbable. In the process, to my mind, as a foreigner observing the Russian political landscape, democracy has been the gainer as Putin reversed his below-fifty-percent popularity rating in full public view while robustly campaigning. Through these weeks of “election fever”, Putin still remains by far Russia’s most popular politician and the majority of Russian people are convinced that his return to the Kremlin as the president ensures “positive stability”. They place trust in his promise that he has a new project for Russia.

The trajectory of politics shows Russia doesn’t need an “Arab Spring”. Even the most passionate western detractor will admit that Putin’s popularity rating today would be the envy of any political leader in a liberal democracy. The legitimacy of his mandate, which Putin is probably going to secure on March 4, is not open to debate. There is no obvious or credible alternative to Putin today for the Russian people.

When we speak of the so-called “Arab Spring”, we are speaking about authoritarianism of a different kind. Russia’s authoritarianism is about an indifferent but capable and well-trained bureaucracy that is far too self-opinionated, corruption and arbitrariness that goes unpunished, opaqueness in governance that is untenable in a country of such high level of social formation, a dysfunctional parliament that caved in due to some catastrophic happenings some 20 years ago, and so on. These deficiencies have bred in the public mind discontent and a strong urge for “change”.

These deficiencies are to be primarily attributed to single-party rule. Only two parties have been registered in Russia in the past 5 years and both are deemed establishment parties. Russia badly needs a multi-party system that genuinely revives the life force of the “White House” and inspires it to pull itself out of the abyss into which Boris Yeltsin rudely dispatched it. The Duma needs to be revived as a throbbing centre of dissent and disputation, discussion and consensus-making, where Russia develops the democratic culture of coalition-building.

Now, Putin cannot issue a presidential decree and order Russia should have a multi-party system. But what he can do is that the present laws that stymie party politics are replaced and a level playing field created. If the opportunity could be provided through mid-term parliamentary polls for the opposition to secure institutional representation in the Duma (for which conditions exist currently, in my opinion), the need and scope for extra-parliamentary agitations would vastly diminish. The time to do this will be in the period of the coming year or so once the legislation regarding political parties is overhauled. Even the commencement of political discussions will shift focus from inchoate street protests to the drafting of the reform program.

The “Decembrists” showed up a range of political opinion ranging from anarchists and rowdy young nationalists, leftists and middle-class liberals to various interest groups with local grievances. Clearly, none of them were inclined toward violence and they were largely driven by grassroots activism. So long as the discontent remains unattended and unless there is a genuine attempt at reform in a near term, the protest movement may transform as a protracted struggle, making Russia increasingly ungovernable except through heavy-handed methods, which are of course a road to nowhere in today’s world, especially for a great power.

Putin is Russia’s best hope for change and Russia made very substantial progress under his leadership in comparison with the situation, say, hardly 12-15 years ago. Paradoxically, what is often not understood –or is deliberately ignored – in the West is that Russia’s national mood actually happens to be more conservative than Putin’s own instincts, especially in Russia’s vast hinterlands. Putin’s announcement of the intention to introduce a one-time tax on the businesses owned by “oligarchs” who acquired state assets during the privatization program of the 1990s is a telling example. The majority of Russian people may probably want Putin to go beyond the Tony Blair formula and seek social justice bordering on retribution, whereas, Putin himself is in a forgiving mood and wants life to move on.

Another paradox is that it is the very sections of the middle class in Russia who used to be the ardent votaries of neo-liberal reforms during the past two decades, who are today the protestors in Moscow. Whereas, the mainstay of Putin’s support happens to be drawn from those who were hurt badly by the neoliberal reforms. Arguably, the neoliberal reforms provided the raison d’etre for the authoritarian system. Putin didn’t create the authoritarian system. The problem is also not corruption; certainly not “crooks and thieves”. The problem is Russia’s neoliberalism.

That makes the challenge facing Putin very formidable. Because, there is a contradiction between the expectations underlying his popular mandate and the entrenched interests of those among the elites dominating the commanding heights of the system whose whole life is bound up with Putin and who count on him to avert the collapse of the dysfunctional system but may still be resistant to change. Again, within the elites too, there are conflicting economic interests as much as overlapping or intermingling interests. All this makes them stakeholders in the prevailing vertical, personality-driven system and in preserving the broad status quo. Quite obviously, even when the protestors were often harshly critical of Putin, the underlying themes were systemic, not personal.

All in all, the protests in Russia are not about fair elections or the falsification of election results. Equally, to talk about the Arab Spring or the “color revolution” is to dramatize. For, it is not going to be easy for any future government in Russia to get away with rigged elections. The protests undoubtedly signify the yearning for change, but this yearning is not about “regime change”. It is about a rapid evolution of the political system so that it becomes more inclusive and accountable and it shows the humility to acknowledge civic pride.