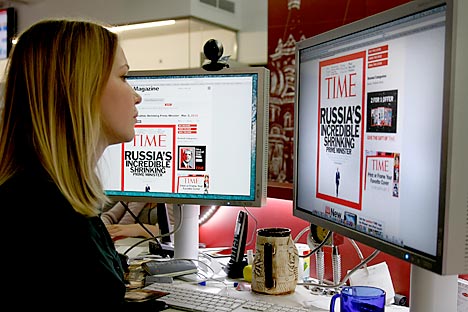 This is the fourth time Vladimir Putin has appeared on the cover of Time. Photo by Nikolay Korolev

Time magazine has once again placed Vladimir Putin on its cover. This time, the picture is accompanied by a headline expressing the author’s certainty that Putin will serve a third term as president. “That makes the world a more dangerous place,” Time warns. Experts argue that the West tends to exaggerate everything connected with Putin.

Vladimir Putin has appeared on yet another Time magazine cover. The March 5 European edition of the magazine features Putin with the headline “Russia’s Incredible Shrinking Prime Minister. Vladimir Putin will win a third term as president, but his hold on power is shakier than ever. That makes the world a more dangerous place”.

“It is safe to assume that the author of these lines is a bigoted Russophobe and Putinophobe. This fear blurs his vision and prevents him from making objective judgments,” Peskov said. “Nevertheless, we will continue this work, we will explain what we do, and we will be ready to explain anything to anyone who wants an explanation. We will also refrain from giving explanations to those who won’t make sense of them.”

The foreign press tends to exaggerate everything connected with Putin, said Fyodor Lukyanov, editor-in-chief of the magazine Russia in Global Affairs.

“The western media tend to demonize Putin and magnify his influence in the world. This explains the current exaggeration of Putin’s weakness,” Lukyanov said. “As for making the world ‘a more dangerous place’ – when Putin was president, not many had a liking for Russia, but overall, it was quite predictable. Naturally, any fundamental changes will cause a universal response.”

This is the fourth time Vladimir Putin has appeared on the cover of Time. He made his debut in November 2003, in connection with Mikhail Khodorkovsky’s arrest. The headline was “Hello, comrade. Vladimir Putin and his men are playing rough. Is Russia’s President heading back to Soviet-style rule?”

On Dec. 31, 2007, Time named Putin its Person of the Year. The headline was simpler this time: “Vladimir Putin. Tsar of the New Russia.” A handful of Soviet leaders had also been named Person of the Year, including Mikhail Gorbachev (twice), Yuri Andropov, Nikita Khrushchev and Joseph Stalin (twice).

Last December, the cover of European edition of Time featured a black-and-white picture of a sad Russian premier with the headline: “The Putin problem. Vladimir Putin has led Russia for 12 years, but the post-Soviet generation wants to know: Why isn’t the country better off?”

In 2008, Time ranked Vladimir Putin the second-most influential man in the world. Since then, the politician has not reappeared on Time’s list.