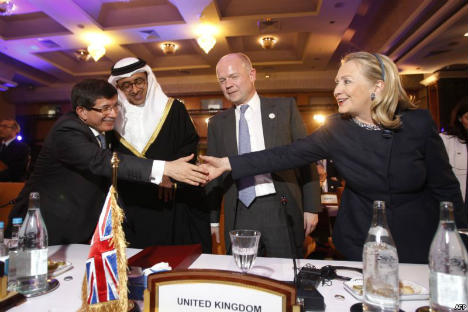 On Friday, representatives of more than 70 nations gathered in Tunis to discuss international action to stop the killings in Syria. But Russia was not among them.

The Kremlin's decision to veto the Feb. 4 United Nations resolution calling for President Bashar Assad to step down has been met with near universal condemnation — and rightly so since within hours of the decision the Syrian regime launched an all-out assault on opposition strongholds.

Clearly, Moscow's stance is morally reprehensible. But is it necessarily bad policy?

Most commentators attributed the decision to the narrow self-interest of the Russian defense industry, which stands to lose about $4 billion a year from arms sales to Damascus. Others saw it as evidence that the Russian Foreign Ministry is still trapped in 19th-century realpolitik, keen to protect its only warm-water naval base in the Syrian port of Tartus.

Another popular argument is to connect the veto to Prime Minister Vladimir Putin's political vulnerability in the face of the upcoming presidential election, and his fear of a color revolution in Moscow. The toppling of Assad, it is suggested, could somehow be a precedent for the fall of Putin.

All of these arguments have some validity, but they miss the central point. From Moscow's point of view, the Syrian veto makes perfect sense, given that a consistent goal of Russian diplomacy over the past decade has been the quest for recognition as a leading power. Russia believes that it is entitled to a seat at the head table and to a say in decisions taken by the international community. They feel that the United States has repeatedly used subterfuge to sideline Russia and take unilateral action in line with its own strategic interests. Notable examples include the decision to enlarge NATO, the bombing of Yugoslavia in 1999, the 2003 invasion of Iraq and, most recently, the military campaign against Libya last year.

As a permanent member of the UN Security Council, Russia has the right to veto any resolution. The veto does not reflect a change of thinking. It is consistent with the foreign policy that Russia has been pursuing for at least the past decade.

By blocking the Syrian resolution, Moscow was simply sending a signal to the international community that it is a power that should be reckoned with — and one whose views must be taken into account. In the short term, Russia does not stand to gain anything specific from this action. But in the long term, it builds credibility for Russia as a leading power.

In one sense, the tactic has worked. Russia got the world's attention at little or no cost to itself.

The United States does not want to recognize the fact that Russia still retains some residual powers from its days as a Soviet superpower and therefore Washington suggests that the Kremlin's action is irrational or motivated by narrow domestic concerns. In reality, Russia's behavior is driven by a desire to protect its long-term national security interests. The United States has acted the same way on occasion — for example, when it uses its Security Council veto to defend Israel.

But other countries see things more clearly. Germany has certainly gotten the message. Speaking at Harvard University on Feb. 17, German Defense Minister Thomas de Maiziere commented on the fate of Resolution 1973 on Libya, passed by the UN Security Council in March 2011. Maiziere noted that "the text said a no-fly zone, but in our heads was regime change." He warned that due to Russia and China's veto powers, "we must be very careful in the wording of UN resolutions."

The unfolding crisis in Iran, with the imminent risk of an Israeli attack, adds further urgency to the situation. Iran has a deep vested interest in the preservation of the Assad regime in Syria, which provides a bridge to the Iranian-backed Hezbollah movement in Lebanon.

To prevent a further deterioration in the region, it is imperative that the international community find a way to bring Russia back into the diplomatic loop so that it can become part of the solution rather than part of the problem. With Russia on board, China is likely to follow — abstaining instead of vetoing.

Peter Rutland is a professor of government at Wesleyan University and Nadiya Kravets is a Shklar research fellow at the Harvard Ukrainian Research Institute.