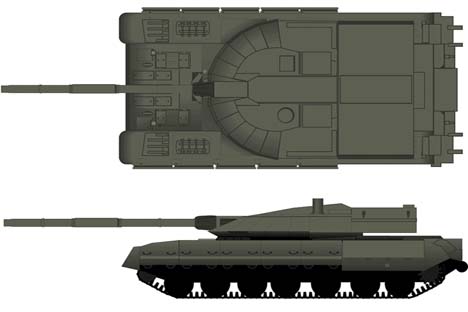 Uralvagonzavod is to create the first prototype of Russia’s new main battle tank built on the Armata platform by 2013, whereas batch production and deliveries to the Russian armed forces are expected to start in 2015, Defence Minister Anatoly Serdyukov and CEO of tank manufacturer Uralvagonzavod Oleg Sienko reported to Prime Minister Vladimir Putin, the Sverdlovsk-based Oblastnaya gazeta said. Until then, the Defence Ministry will continue the advanced modernisation of its armoured vehicles.

According to Sienko, Uralvagonzavod and military experts are running trials of the new tank’s main units and components. No other details about the new machine have yet been reported. As of today, the Defence Ministry has a contract with Uralvagonzavod for upgrading of 170 T-72 main battle tanks, to a cost of more than 6 billion roubles.

Russian tanks beyond competition no matter what they say

The Russian Defence Ministry has thus given up on its original plans to purchase T-90 tanks, which were previously criticised by high-ranking ministry and general staff officials for being too expensive (assuming that the T-90 is just an upgrade of the T-72 model, which was first delivered to the armed forces in 1973).

The initial reports about development of a versatile armoured platform appeared in the spring of 2011, and it was then that the Defence Ministry dismissed an alternative project by the Russian defence and industrial complex – the tank dubbed “object 195” – because of its high cost. In April 2011, Lieutenant General Yuri Kovalenko, former Senior Deputy Head of the Russian Defence Ministry’s Motorised Armour Directorate, said: “The Russian armed forces will have a new main tank with fundamentally new characteristics by 2015.”

Ruslan Pukhov, Director of the Centre for Analysis of Strategies and Technologies, believes that “this priority project should be a cheaper alternative to the “object 195”, which is no longer financed by the Defence Ministry, as it has proved too expensive. It had a more lethal fire power than the current modifications of the T-90.”

Reserve Colonel Viktor Murakhovsky, editor-in-chief of the magazine “Arsenal”, spoke highly of the new tank project in his interview with Kommersant: “the crew is separated from the ammunition and fuel compartments, which means high survivability, which is a priority for the Defence Ministry.”

Another of the project’s innovations is that, for the first time in the history of the Russian armed forces, a whole line of armoured vehicles will be created on the basis of the single Armata platform. This will save government funds and improve the mobility potential.

It is planned for the new platform to be employed for developing modern heavy tanks, infantry fighting vehicles, engineering vehicles and other types of armour for tank and motorised infantry brigades. The idea of having a uniform platform is valid and future-proof, says editor of “Independent Military Review” Viktor Litovkin: “In the Soviet Union, there were three tanks with the same characteristics – the T-80, T-64 and T-72 – but the parts were not mutually substitutable. This proved very costly for the defence industry and the Ministry. The Defence Ministry is currently creating a single platform for various types of combat materiel – this will be both economical and efficient from the military point of view.”

Single armour platforms are being used for various types of machine in many countries. The United States is working on the Ground Combat Vehicle (GCV) module platform, which is expected to be in the field by 2015 and gradually replace first the M113 and Stryker armoured personnel carriers and fighting vehicles, and then all types of armoured vehicle, other than heavy tanks. Viktor Litovkin believes Russia may later come up with a versatile wheeled platform in addition to the track platform that is now being developed: “If we manage to create a uniform track base, we may create a single wheeled base, an option that is currently being considered by the Defence Ministry and the industry. Russia will thus approach the biggest world producers. The United States usually makes use of a single platform for all armoured vehicles, other than heavy tanks. As for medium tanks or infantry fighting vehicles, they are based upon the same platform.”

The Armada automatic loader will include 32 shells designed for various purposes, and the new gun (probably a 125mm one) with two-main stabilisation will be mounted on an unmanned turret. Kovalenko also said the Armata would incorporate developments from other projects, including the “object 195”.