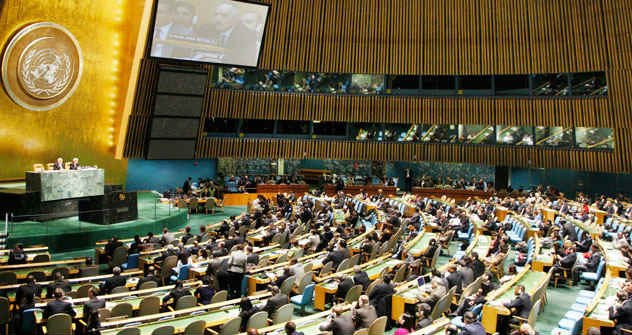 Just as the fizz seems to be going out of the BRICS grouping, the member countries have scrambled to put their act together.

Apropos the crisis in Syria, which is arguably, the “hottest” issue in international politics today, the BRICS showed up worrying signs of an identity crisis of its own. Russia and China vetoed the Arab League resolution on Syria in the United Nations Security Council, while India and Brazil voted for the resolution. The pattern repeated a week later in the UN General Assembly.

Again it repeated ditto when the ‘Friends of Syria’ held its meeting at Tunis last Friday. Russia and China stayed away from the Tunis meet while India and Brazil registered a low-key presence. It began to seem that the BRICS era is probably ending unceremoniously. The BRICS as a grouping of emerging market powerhouses has never had a dearth of detractors who would feel immensely relieved – notably in the West, especially the United States.

Therefore, it comes as a pleasant surprise that the rumor regarding the BRICS’ premature death was an exaggeration. The tidings from Mexico City this week show that BRICS is not only up and about but, in a manner of speaking, raring to go as it approaches the annual summit in the Indian capital on March 28-29.

On the sidelines of a G-20 meeting in Mexico City last week, the finance ministers of the BRICS – Brazil, Russia, India, China and South Africa – made it a point to hold an exclusive round of consultations. And they have come up with a startling proposal to set up a multilateral bank that would be funded exclusively by the developing countries with a view to finance projects in those countries.

Interestingly, the proposal has originated from India. New Delhi circulated its proposal to the BRICS capitals beforehand so as to carry it forward for discussion among the developing countries as a whole alongside the G-20 meeting.

New Delhi, as the host of this year’s BRICS summit in end-March, has also been crafting the agenda for the grouping’s path ahead. Its proposal for a BRICS bank is built on a pledge made at the group’s summit meeting last April in China to “strengthen financial cooperation among the BRICS Development Banks.” The reason d’etre of the Indian proposal for a BRICS bank is that the existing multilateral financial bodies have not been effective in their funding activities in the developing countries. In actuality, the major donors to these institutions themselves are facing economic crunch at this point in time and are hardly keeping themselves afloat.

Brazil has been quick to voice support, in principle, for the Indian proposal. Of course, the idea is in its infancy but the forthcoming BRICS summit is expected to deliberate on it. Incidentally, Indian foreign ministry has announced that Chinese foreign minister Yang Jiechi is arriving in Delhi on Wednesday and his discussion will include the agenda of the BRICS summit meeting.

India feels the impetus in the direction of innovating the global financial architecture as its own sense of vulnerability to global risks is rising. Despite India’s robust economic growth (which is expected to be around 7% this year), the economy’s capacity to withstand major external shocks remains questionable. A recent report titled The Global Risks Atlas 2012 authored by Maplecroft, the well-known risk analysis firm, cited India as the most exposed and least resilient BRIC nation to the global risks. On a list of 178 countries, India is placed as the 19th most exposed and least resilient economy while Russia, China and Brazil have been ranked at the 30th, 58th and 97th position.

The Indian initiative on the BRICS bank also needs to be seen against a concerted Western campaign to portray the grouping as playing a declining role in the global dynamics due to its loss of glitter lately as holding out much less early mover advantage today for western investors. According to this thesis, CIVETS – Colombia, Indonesia, Vietnam, Egypt, Turkey and South Africa – is the new game in town as the next generation of tiger economies.

The game plan here is to challenge the relevance of the BRICS on the specious plea that there are other developing economies too that are growing rapidly or are offering high returns on financial markets. The BRICS shouldn’t allow this ploy to succeed. For one thing, the role of the BRICS can only increase as it represents very large and rapidly growing “middle-income” countries. If the “middle-income” economies account for 58% of world growth today, the BRICS are the largest “bloc” within that.

In a global scenario where the developed economies are losing their dominance in world growth and the “low-income” economies among the developing economies account for only 1% of the world growth in the past 5-year period between 2005 and 2010, the crucial role of BRICS is self-evident.

The heart of the matter is that the BRICS economies are not only growing rapidly – even spectacularly – but they are also large. China, Brazil, India and Russia are ranked respectively as the 2nd, 7th, 9th and 11th largest economies in the world at present. Unsurprisingly, what petrifies the West is that their collective impact of the BRICS on the world dynamics is of an unprecedented character in modern economic history, which has so far been built on the paradigm of the “developed / developing” world.

The paradigm shift is further accentuated by the international financial crisis, as the facts testify. According to the World Bank statistics, BRICS accounted for 53% of the entire global GDP growth of $7250 billion during the 2007-2010 period. The US’ growth during this period ($592 billion) was a mere one-sixth of the BRICS’ GDP growth of $3819 billion. Most likely, the trend is repeating in 2012. The European Union and Japan are not expected to “grow”, while the US’ growth is stalling and even with large borrowings, it is expected to be less than half of China’s GDP growth – leave alone the BRICS’ as a whole.

In sum, the BRICS’ divergent positions on Syria shouldn’t come as surprise. As a commentary in China’s Global Times newspaper put it succinctly, “BRICS is not a NATO [North Atlantic Treaty Organization] type political / military bloc. It coordinates the economic interests of the world’s largest developing economies… Some small economies may continue to grow even more rapidly than some BRICS… [But] BRICS countries will continue to reinforce their role as a driving force in the world economy.”

Who would have thought that BRICS would take up cudgels against the US’ dominance of the Bretton Woods system so openly? At Mexico City last week, the BRICS finance ministers decided that it is about time that the US’ decades-long prerogative to head the World Bank doesn’t go unchallenged.

“Candidates should be based on merit and not on nationality”, Brazilian finance minister Guido Mantega told reporters. The BRICS proposes to discuss the possibility of putting up their own candidate to challenge “whoever the US government nominates”, according to Reuters. (Possible candidates include US secretary of state Hillary Clinton, former US treasury secretary Lawrence Summers and US ambassador to the UN Susan Rice.)

“It is time we [BRICS] break the traditions of the US and Europe sharing the two [World bank and IMF] seats and amongst all of us we must try harder this time to find some consensus”, Pravin Gordhan, South Africa’s finance minister added. This may sound idealistic. Which, indeed, makes the audacity even more important, since it goes to show that the BRICS flame was far from put out by the crisis in Syria.