Humanity at crossroads: technology explosion or a return to the Middle Ages 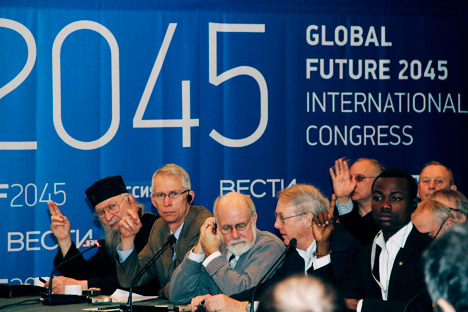 As unsuspecting citizens of the developed world ponder how best to survive the current economic crisis, humanity is actually facing another, far more serious, threat. In the near future, humanity will either regress back to the murky depths of the Middle Ages, or it will march onwards and upwards towards a new and previously unthinkable reality. This idea was the theme of the Global Future 2045 Congress, a recent gathering in Moscow to discuss the future direction of civilization.

The idea of choosing the right path is the subject of many Russian fairy tales. At a certain point in the story, the hero inevitably ends up at a crossroads, and faces a choice such as: If you go right you’ll lose your horse, if you go left you’ll lose your head, carry straight on and you’ll marry a princess and live happily ever after.

It could be argued that mankind is actually at a similar sort of crossroads right now, although most people would be loath to admit it. The severity of the situation was lucidly expressed at the Global Future 2045 Congress by Vitaly Dunin-Barkovskiy, a physicist and founder of the Russian Brain Reverse Engineering Project: “Singularity is inevitable, yet society is carrying on as if nothing is ever going to change.”

Why should human society – you and me – rethink the way we live our lives? According to independent studies carried out by scientists and analysts from a range of disciplines, by the middle of the 21st Century, and maybe even sooner, civilization on planet Earth will go through a massive paradigm shift, and human life will change forever. No one knows exactly what form this shift will take, but some aspects are beginning to become clear.

The concept of technological singularity is one we can expect to hear more about. This term was coined by the famous American academic, futurist and inventor Raymond Kurzweil, who made his first trip to Russia as an honored guest at the Global Future 2045 Congress. Technological singularity is a hypothetical moment in time when technological progress reaches the point of no return – when the pace of technological invention skyrockets to the extent that humans no longer have any control over what happens. In essence, this would mean the emergence of intelligent, self-replicating machines that operate without human input.

The critical moment would be when machines take on an artificial intelligence that matches or exceeds the brainpower of humans. No one in the academic community doubts that this will happen - the question is not if, but when. A few scientists – including Kurzweil – suggest singularity will happen in 2045. Others foresee it occurring even earlier – around 2030. The consensus is that it won’t be long in coming.

Not convinced? For those who think this is all a bit far-fetched, Kurzweil points out the following facts and figures in the history of global communication: It took 400 years to develop a printing press to distribute information all around the world; the landline telephone was developed in 50 years, and the mobile phone took only seven. Social networking sites have conquered the world in just three years. Back in 1982, when Raymond Kurzweil wrote that the Internet would soon develop into a vast worldwide network with the number of users doubling each year, his ideas were also considered far-fetched.

The American scientist’s next prediction is that nanomachines will be put inside human bodies by 2045.

Human bodies are big news in science. Most speakers at the congress agreed that in the next few decades, scientists will focus on improving humans, using technology to enhance our physical bodies. This seems like the logical next step – the inevitable leap forward in the development of machines should result in a series of improvements to the human mechanism. Alexander Frolov, a biologist, thinks cybernetic devices will soon be fused to the human body as a matter of course: “This could mean using powered exoskeletons for maximizing human strength and endurance. Or it could entail using additional organs, for example, a third hand, for working in conditions that demand it.” The next stage is the creation of an artificial body or an avatar, and this may soon be within the bounds of possibility. Frolov thinks that, providing scientists receive sufficient funding, we can expect to see these new developments within the next few years. For example, some societies could employ anthropomorphic robots that function as nurses or nannies.

Ambitious technology projects like these could give mankind a new stimulus for innovation and invention, the like of which has not been seen since the space. As noted by the Russian writer and futurist Maksim Kalashnikov, the whole technological armory we take for granted today was actually developed in the late 1960s – early 1970s when the two main systems of government – capitalist and socialist – came head to head in a battle for technological superiority. It was thanks to this powerful stimulus that all the outlandish scientific ideas of the time actually came to fruition. For example, the lunar program took only nine years from when the original idea was conceived, to the actual lunar landing in 1969.

But after the Soviet Union collapsed, technological development changed direction and veered towards vertical progress – inner and outer space; and horizontal progress – global communication. Of course, the achievements of science around the end of the last century cannot be underestimated – most of us can no longer imagine lives without the Internet or mobile phones. But of course all these developments have their downsides. Kalashnikov lists them as: a fall in the quality of education, social autism, illogical thought processes, the death of reading culture and deindustrialization.

Today Western countries are outsourcing their industrial production to Asia. This may benefit the natural environment of the Western world, but, according to many analysts, once industry disappears from a country, science and education are the next things to go – they simply become superfluous in a society without production. Then art and culture in that country also starts to wane. Once all this has happened, it’s only a small step before the society slips back into the middle ages. “We are seeing more and more of the new barbarians. They are unable to distinguish cause from effect, and they are easily deceived. Their video-game mentality means they could easily start to wreak havoc, not understanding the consequences of this behavior”, warns Kalashnikov. If the proportion of people like this comes to encompass 50 percent of the Earth’s population, then a new “middle ages” are almost guaranteed.

These experts believe the salvation of civilization could be in a mega-project: a global task for the greatest minds, such as a new direction in space exploration, and the Avatar project. It is global initiatives like these that will force humanity to seek out new approaches to science and technology: new goals in science would kick-start research into new sources of energy and new technology employed in industry. This could spur an army of scientists and into action, who would further develop research and education.

But still the process of innovation is never simple. As Maksim Kalashnikov pointed out, if today someone were to invent a cure for tooth decay, this would kill the whole dental profession. Another expert cited the example of some Finnish scientists, who developed an incredible 3D printer, capable of producing metal components, only to find that the market isn’t ready for it.

Today trillions of dollars are being used to patch up the crumbling financial system. Wouldn’t it be better to spend this money on creating something completely new, an investment in an innovative project that could potentially provide a foundation for the development and renewal of mankind? And a project like this could only ever be created by the combined efforts of scientists from all over the world. One of the people at the conference, test pilot Sergei Zhukov, illustrated this point using NASA as an example: When funding was cut for the program to explore Mars, American researchers recommended that NASA turn to Russia and China, saying that everyone needed to work together.