India in need of protection from Russian tourists 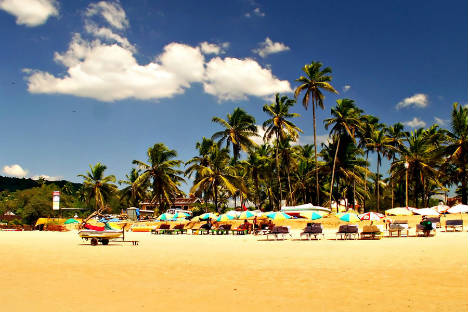 India needs to be protected from Russians, Shantaram Naik, a deputy of the upper house of the Indian parliament believes. Naika has recently claimed that there are too many Russians and Israelis living in India's Goa.

Most likely, the Indian official was concerned about the quality of those people, rather than their quantity. According to the deputy, the Russians do not respect the laws of the country, where they come to live.

Downshifting became extremely popular in Russia several years ago. Many decided to escape from their monotonous lives, stuffy offices and cold Russian weather to India's Goa or to Thailand. It is indeed pleasant to sit on the beach, enjoy the view of the ocean and think of the meaning of life. However, it can be so only if you know that you have money in your pocket.

This is the reason why Russian managers began to build businesses in India. There is nothing negative about this at first sight. However, Shantaram Naik claims that many of those businesses are illegal.

"Russian and Israeli citizen literally occupied several settlements in Goa, and this can not be called perfect tourism," Naik said.

The Russian diaspora, which appeared in India on the base of downshifting, may do absurd things at times. They order cooks from Russia to be able to eat traditional Russian food such as borsch, syrniki (cottage cheese pancakes) with sour cream, the Russian salad, meat chops with mashed potatoes and okroshka. In 2004, the Indian government allowed foreign companies to purchase real estate in the country. Russian citizens use this opportunity very actively.

Several tens of thousands of Russian citizens visit Goa every year. Young people make the lion's share of them. The Indian holidays attracts Russians from remote regions of the country such as Siberia, Yakutia and Kamchatka.

The Indian authorities have not commented Shantaram Naik's statements yet. It is worthy of note that many Russians are forced to leave India on a regular basis. The main reason is very simple - expired visas.

In 2010, the head of the Association of Tourism and Travel in Goa, Ralph de Suza, stated that Russians endangered tourism in the region. According to him, Russian citizens often come into conflict with the local population. Many of such conflicts occur under the influence of alcohol, he added.

It appears that India is not the only place in the world where Russian tourists create problems. The Parliament of Finland, for example, is going to consider a legislative initiative that bans the acquisition of real estate in Finland for all non-citizens of the European Union, including Russians, of course. Moreover, Finnish deputies do not conceal the fact that the initiative is aimed against the Russian citizens in the first place.

Twenty-two authors of the initiative said that the deals, which Russian citizens conclude in Finland, exert a negative influence on the cost of real estate and land in the country. To put it otherwise, the Russians make apartments and land in Finland less affordable for the Finns. The average price for a cottage in Finland is 100,000 euros, but the Russians can easily afford real estate with the price tag of 200,000 euros.

In 2011, Russians acquired nearly 400 objects of real estate in the country in the total sum of 50 billion euros.

Opinion polls say that nearly 80 percent of the Finns support the initiative. However, neither the Finnish president, nor the majority of Finnish deputies intend to ruin their relations with Russia. The chances for this initiative to become law are slim. Only 22 of 200 deputies expressed their readiness to support the bill.