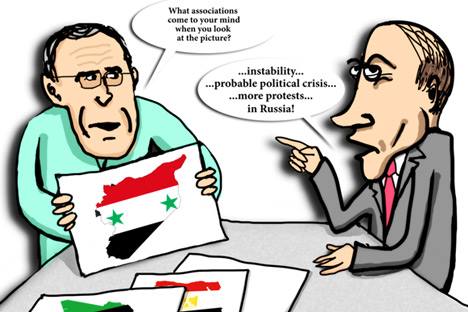 Russia’s influence in the Middle East, or rather, what was left of the Soviet influence in the region, is fading away. Bashar Assad’s regime in Syria, Moscow’s last ally, finds itself in an increasing international isolation and fights for its life.

Having vetoed the United Nations Security Council resolution on Syria — proposed by Morocco and supported by the United States, the European Union and the Arab states — Russia has found itself at loggerheads. What is even more dramatic, Moscow is now de facto dangerously involved in the regional struggle between fundamentalist Iran and the Gulf monarchies over the fate of Syria, Tehran’s proxy in the Middle East since the early 1980s.

Economic considerations are most frequently cited as a reason for the Kremlin’s intransigence. Russia is set to lose what it claims are $20 billion of investments, up to $5 billion of arms deals and a naval station in the Mediterranean port of Tartus. Yet I find the purely economic reasoning insufficient. The United States sunk tens of billions of dollars into Egypt, but in the end had to relinquish its support for Hosni Mubarak when it became clear that Mubarak’s position was untenable.

Moscow has to balance its support for Assad with its larger interests in the Arab world and the damage that could be done to its reputation. But the Russian attitude toward Syria remains firmly based on its experience last year over Libya and its desire never to let anything along the same lines happen again.

The Kremlin seems to believe that it was deceived by the West after the Russian delegation to the United Nations abstained from the vote on the UN Security Council resolution 1973. Moscow’s reasoning is that the resolution was instrumental in letting the NATO-led force help the Libyan rebels oust Colonel Muammar Gaddafi. Russia lost several billion dollars worth of contracts in Libya, because it refused to believe until the very end that Gaddafi was doomed from the moment the first Royal Air Force plane took off to enforce a no-fly zone over the now-defunct Jamahiriya.

A very senior Russian diplomat told me not long before Russia vetoed the Syrian resolution in the UN: “You have to understand! The Saudis and the Qataris are pouring arms into Syria to overthrow Assad!” He seemed to have conveniently forgotten Iran’s massive support for Assad and Moscow’s own casual admission that it was sending arms to the Syrian regime by sea, after Cyprus briefly detained a ship carrying nearly 60 tons of Russian ammunition and arms to Syria. Its is probably true that the Gulf monarchies are supporting the Syrian rebels. But Moscow refuses to acknowledge that the routes of what increasingly looks like a civil war in Syria are purely domestic and lie in the inability of the Assad regime to adapt to new conditions.

Russia’s leaders appear obsessed with the threat of regime change. This notion has been anathema to the Kremlin ever since the American invasion of Iraq in 2003. The Rose Revolution in Georgia in 2003 and especially the Orange Revolution in Ukraine in 2004 are seen by Russia’s ruling class as examples of a subtle regime change by the United States, with the help of money channelled to Ukraine via NGOs like the National Endowment for Democracy. The recent wave of anti-government protests in Russia seems to have only strengthened the Kremlin’s conviction that the West is out to get everyone who does not toe its line. Moscow’s unconditional support for Bashar Assad, its impending falling out with the Americans and the Europeans over Iran and its newly-found alliance with China look to me as signs not so much of foreign policy realignment, but of domestic considerations projected on events abroad.